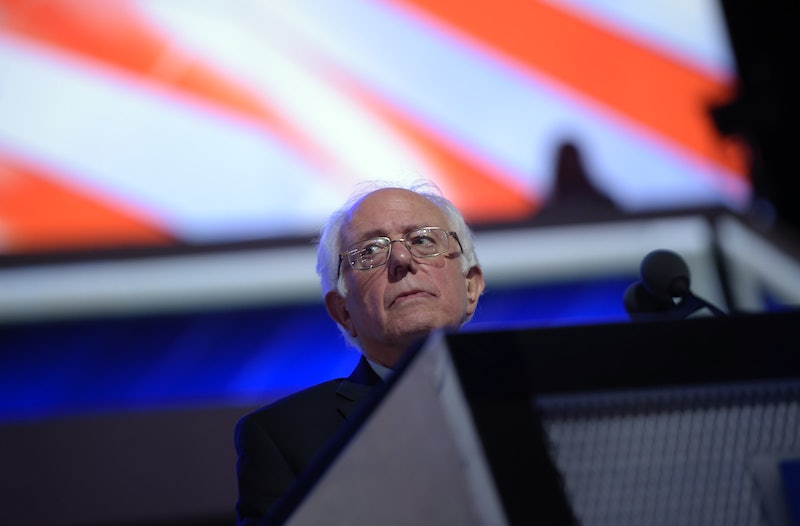 Two weeks before the Democratic National Convention, Sen. Bernie Sanders endorsed primary opponent Hillary Clinton for president. The theme of the convention's first day is "United Together," and as Sanders supporters grapple over whether or not to follow his lead in backing Clinton, the Vermont senator will take the stage and make his pitch for party unity. Here's how to watch Sanders' DNC speech.

There are several options for tuning into the convention. You can expect every major cable news network to be covering it, so if you want to catch parts of speeches peppered with pundit commentary, that's a good option. If you want pure, unadulterated DNC action on TV, C-SPAN has your back with commentary-free coverage. But you don't need a TV to watch; C-SPAN will also be live streaming the convention online. There will be a live stream on YouTube as well, where viewers can watch the convention online. Keep both options in mind, in case there are any feed glitches on either site.

The exact order of speakers for Monday has not been released, although we know that several people will speak. The day's proceedings officially begin at 4 p.m. ET, and we'll hear from Sen. Elizabeth Warren, a bunch of Democrats who endorsed Sanders, DREAMer Astrid Silva, and Michelle Obama, among others, Vox reported. We can expect Sanders' speech to be a prime-time event, given the importance of his role, but you might want to tune in early to make sure you don't miss it, since we're not sure when he'll be up.

Sanders has been urging his supporters to back Clinton in the November election, frequently citing fear of Trump as the reason — though he did speak to Clinton's merits during his official endorsement at a New Hampshire rally on July 12. But some of his supporters, including delegates at the convention, are not so quick to stick with the Democratic Party with Clinton at the helm. At a gathering on Monday before the convention, Sanders' call to elect Clinton evoked boos from some of his delegates. And within the first day of Sanders' endorsement, donations to presumptive Green Party nominee Jill Stein's campaign reportedly increased by 1,000 percent.

We can expect Sanders to push hard during his speech to unify the left-leaning electorate in support of Clinton. Whether he goes the route of talking up Clinton's merits or continues with his more typical recourse to fear of Trump is the question that looms large leading up to Monday night. Sanders' DNC speech will be must-see, and fortunately, you've got plenty of options for watching.