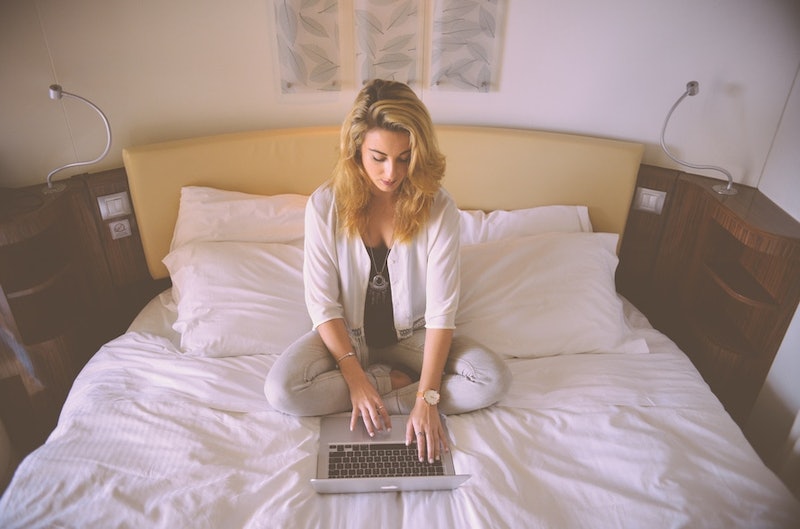 It's hard to find someone these days who isn't on some form of social media. Although Instagram and Facebook can definitely be fun, they can also come with a dark side. Some social media habits can be bad for your health, so it's important to make sure you're using these website in apps in a way that are benefitting your life, not harming it. In fact, a study from University of Pittsburgh School of Medicine found that the more young adults use social media, the more unhappy they report being.

"When used for good, social media can be a wonderful tool," says relationship expert April Masini over email. "However, it can also be used in ways that aren’t healthy. For instance, social media can become the substance for an addiction. People actually get addicted to social media, so much so that it interferes with their work, their health, and their relationships. They become obsessed."

Snubbing someone you're around in favor of a cell phone has become so common, there's now a term for it. "Phubbing is a slang term now used to describe spending time on your smartphone when you are in the presence of other people, especially a romantic partner or love interest," says psychologist Dr. Joseph Cilona over email. "Time spent engaged in texting, email, social media and the like is an increasingly common cause of conflict in modern relationships."

It's super tempting to check out what your ex is doing via social media, but when has something we ever found ever felt good? "Monitoring your ex's online activity is one of the worst (and most common) post break-up mistakes," says Cilona. "If the relationship is truly over and you need to heal and move on, online monitoring can prolong the process excessively, and cause unnecessary hurt, pain, and frustration."

"When you can’t get through a meal without checking your social media, and you suddenly realize that the others at your table are doing the same thing, you’ve created a life for your social media, that it was never intended to have," says Masini. Meal times are a place for social bonding, and multiple studies show that there are benefits to talking over a meal together, including shifting people's perceptions of inequality, less problems with substance abuse, healthier eating, and better academic performance.

4. Checking Your Notifications When Driving

Twenty-eight percent of all vehicle accidents are attributed to distracted driving from cell phone usage, according to the National Safety Council. Those Instagram likes can wait until later. "It’s not just texting and driving that creates driving hazards," says Masini. "It’s checking without typing that is also a big distraction, whether you’re driving, jogging or biking — and for some, even just walking!"

5. Comparing Yourself To Others

A study from the Journal of Social and Clinical Psychology found a link between social media use and depression, but the mediating factor in this link was the tendency for people to compare themselves to others. "That quick burst of short-lived self-esteem (through putting down someone else) or that shame spiral of not living up to the impossibly high standards you have for yourself (through putting yourself down when compared to someone else) do not help your health and well-being," says psychotherapist Kristen Martinez, M.Ed., Ed.S., LMHCA, NCC over email.

6. Using Social Media When You're Lonely

It's okay to not want to go out on a Saturday night, but if you're replacing real life social interaction with browsing through Twitter, it can have some negative consequences. "Chances are that looking through social media when you're depressed or lonely will only amplify those feelings," says Martinez. "Why not call a dear friend instead, or Skype with your parents?"

7. Logging On When You're Doing Other Things

It might seem possible to get your work done while browsing through Instagram, but multitasking — which is actually just the process of switching back and forth quickly between two tasks — can have some negative effects on the brain. Constantly doing multiple things at once can cause changes in your brain that put you in a constant state of distraction, according to research published in the journal PLOS One.

It's not uncommon to play on your phone or computer before bed, but the light from your computer and cell phone can disrupt your sleep, according to WebMD. The glow from your technology delays the release melatonin, the sleep-inducing hormone that regulates your sleep and wake cycle.

If you're someone who posts everything you do, you might want to clear it with others before you post your activities or your whereabouts. "You can betray relationships by ignoring the boundaries that others have when it comes to social media," says Masini. "Not everyone wants their whereabouts and images on social media, so when you post, even with the best of intentions, you may be betraying a privacy boundary you didn’t know about because you didn’t ask first. "

"That forgotten weekend in Vegas was a blast — but it’s not forgotten when you’ve got inappropriate images of yourself that your office colleagues and clients may see and not be thrilled about," says Masini. "Suddenly, you’re not the perfect person for the job — and it’s all because of social media."

"Attaching your perception of yourself, or even your mood, to how many people 'like' your post/snap/tweet," [is unhealthy]," says psychologist Anita Marchesani, Ph.D. over email. "Too many people rely on being acknowledged by others in order to feel good about themselves. Not getting the expected response from a person or group of people has far too much influence over the daily moods and self-esteem of too many people."

If social media starts to affect either your physical or mental health, it might be time to sign off and give yourself a break.

More like this
19 Latinx Therapists & Mental Health Experts To Follow On Instagram
By Kaitlyn Wylde, Naydeline Mejia and Lexi Inks
Why TikTok Is Flooded With Controversial Videos About "Pick Me Girls"
By Courtney Young
Why Everyone Is "Soft Tagging" Friends On Instagram Right Now
By Alexis Morillo
20 Smart Devices Under $35 That’ll Change The Entire Vibe Of Your Home
By Emma Carey
Get Even More From Bustle — Sign Up For The Newsletter