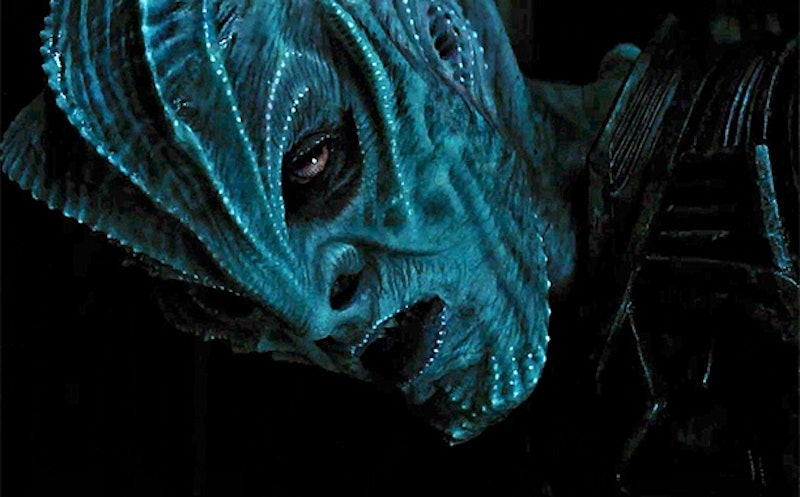 Star Trek Beyond hasn't been in theaters for long, but already, it's doing great. The third film in the rebooted "Kelvin Timeline" franchise has made upwards of $59 million, according to Box Office Mojo, and has an 86% fresh rating on Rotten Tomatoes. As a Star Trek geek myself, I really enjoyed it, but one thing I didn't love about the film was Beyond's villain, Krall, played by Idris Elba. Krall is a bit underwhelming, with an unclear backstory, a thin motive, and unexplained technology. He isn't exactly a memorable bad guy, but he is the latest Star Trek villain to be little more than an angry, vengeful, powerful lone dude who just wants to destroy the hell out of the Federation or Earth. Krall's inclusion makes me hope that future Star Trek movies don't decide to keep revisiting the "angry aliens out to kill" trend (Nero, Khan...) — that they instead choose not to include a villain at all, but rather a different kind of conflict entirely.

With a fourth Star Trek film confirmed to be on the way, one that will possibly feature time travel since its casting includes Chris Hemsworth returning as Captain Kirk's father, maybe the writers want to try something new and leave the lone-gunman-style bad guys behind. The villains of the Star Trek reboots have gotten too one-note, and there's no need to introduce another. Instead of creating a new villain, how about the next Star Trek movie take a hint from the past TV shows? Throughout all of the various Star Trek series, the crews have always had many more problems than just angry baddies. There were planets to explore, puzzles to solve, first encounters to initiate, and treaties to sign, among other things. So perhaps Star Trek 4 shouldn't be about a villain, but instead take a note from some old episodes, like the ones below, and feature any number of conflicts that the Enterprise crew could face that don't involve an angry bad guy.

1. Star Trek: The Original Series: "Return Of The Archons"

This episode found the crew of the Enterprise investigating a strange planet in search of the missing USS Archon. What they find, however, is a static culture ruled over by an unseen tyrannical leader. As the crew solves the mystery of the people, their cult-like devotion to their leader, and the society's history, they discover that the leader is actually a 6,000-year-old computer. Using the computer's own logic, Captain Kirk tricks the computer into self destructing. It's an interesting take on artificial intelligence and how societies adhere to rules and regulations. There's so much tech in the Star Trek universe, it's a wonder that a malevolent artificial intelligence program doesn't pop up more often.

2. Star Trek: The Next Generation: "The Inner Light"

Here's an example of an episode that doesn't feature a villain at all, but rather a problem to solve. When Captain Picard is seemingly "attacked" by an alien probe, the crew takes it as an act of aggression. But really what's happening is that Picard, while unconscious, is living an entire other life in in his mind in the span of minutes. The probe is that of a long-extinct race who wanted to tell the story of their people, and Picard was the lucky subject chosen. This episode won a Hugo Award and was nominated for an Emmy, and it, along with TNG's pilot, "Encounter at Farpoint," emphasize that there are multitudinous alien creatures out in the universe that we can't understand but not all of them are meant to be adversaries.

Of all of the conflicts that the crew of the Enterprise may find themselves in, not all of them have to be with sentient aliens. Traveling through space, natural phenomena such as exploding stars, black holes, and other interstellar occurrences would probably be just as common, if not more frequent, than fights with aliens. In the DS9 episode "Meridian," the crew comes across an entire planet of people whose existence travels back and forth between dimensions. In the DS9 dimension, they exist as humans, but in the other dimension, the one they're desperately trying to escape, they exist only as consciousnesses. Saving a race of people who face some kind of naturally occurring problem in the universe without necessarily fighting a bad guy may make for a nice change.

Along their 75-year journey back from the Delta Quadrant, the crew of the USS Voyager, including the badass Captain Janeway, stumbled upon a variety of new species and planets, one of which was a planet where time moved much faster than aboard Voyager. As millennia of evolution occurred on the planet, mere minutes passed as Voyager orbited, and the crew became unintentionally involved in the advancement of the planet's civilization. It's an interesting take on Star Trek's Prime Directive law, which forbids Starfleet from interfering in the development of alien civilizations, particularly those that are early on in their technological achievements. The Prime Directive is always an interesting conundrum in the Star Trek universe, and seeing the new versions of Kirk and Spock handle it could be really fun.

Ok so this one technically has a villain: The Xindi. The most recent Star Trek series' Season 2 finale saw the crew of the earliest Enterprise witness a horrific attack on Earth by the Xindi, an alien race, which led to an all-out war. In the early aughts, 9/11 allegories popped up all over television, and seeing as how Star Trek: Enterprise premiered in September 2001, the war with the Xindi became Star Trek's version and touched on all of the common themes: xenophobia, protection, increased militarization, and the sacrifices we make to feel safe. While the war with the Xindi is long over by the time Kirk and the crew run the Enterprise, there are other plots in the Star Trek timeline that feature the Federation in conflict with other species, particularly the Romulans and the Klingons. If done well, a larger conflict instead of a lone villain might put these Star Trek movies into a greater perspective.

The universe is enormous, maybe even infinite, and so are the possibilities for Star Trek's planets, problems, and characters. If anything, the Kelvin Timeline reboot movies haven't thought outside of the box enough. By looking back at some of the best and weirdest Star Trek episodes, something a little more creative than "angry villain seeks revenge" may pop into the writers' heads, providing something a little different, and much more interesting, for Star Trek 4.