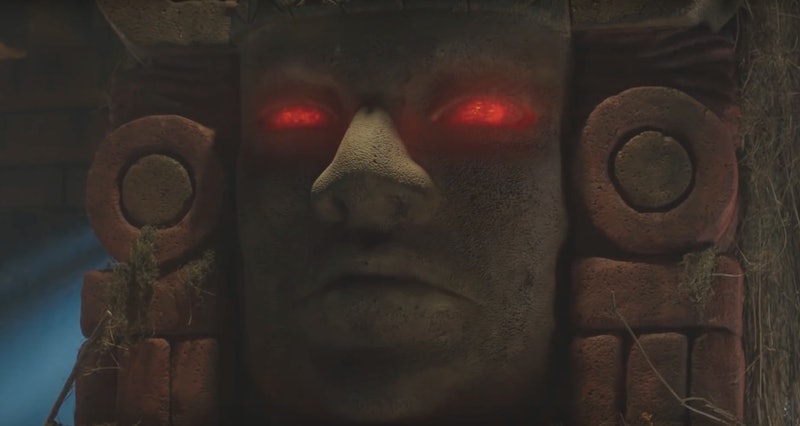 Some of us out there love team sports. Basketball, football, soccer — they're all fantastic. But for a select group, "team sports" has a very different meaning. Whether they were Red Jaguars, Blue Barracudas, Green Monkeys, Purple Parrots, Orange Iguanas or Silver Snakes, it was always about listening to Olmec and conquering that Temple Run. That's right, I'm talking about the majesty of the game show Legends of the Hidden Temple , which is coming back to Nickelodeon this fall.

Every millennial's favorite game show has been off the air since 1995, leaving many of us feeling a bit aimless (No? Just me?). For '90s kids, many of us were into Double Dare or Figure It Out, but we were all about Legends of the Hidden Temple. What went better with Dunkaroos and Hi-C than watching Olmec, the giant Aztec head? Well, we'll get to relive those glory days once again thanks to this made-for-TV movie featuring a very sweet cameo by the show's original game show host, Kirk Fogg. I know, I know. You're probably rolling your eyes right now. "But Allie," you'll try and tell me,"I'm an adult. I pay taxes and devote my Sundays to meal prepping Pinterest recipes. I don't have time for a dumb kids movie." Think again, my dude. This is not your average kids movie because this is not your average subject matter. It's Legends. Of. The. Hidden. Temple.

The movie follows three siblings — Sadie, Dudley, and Noah —who escape from a boring tour of an ancient temple while on a family vacation. While Sadie tries to guide her younger brothers back to the tour, they accidentally trigger a secret door that drops them into the heart of the ancient temple. It's only then that they must put to use their knowledge of the game show in order to find a way out. Listen, I make it sound cheesy. It may actually be a bit cheesy. But isn't that the best part about nostalgia, that it sometimes feels a little silly and childish and fun? There's no doubt in my mind that watching Legends of the Hidden Temple: The Movie is going to be anything less than a joyful trip down memory lane.

More like this
The 'Hocus Pocus' Sequel Finally Has A Release Date & It Makes Total Sense
By Shannon Barbour and Radhika Menon
Hayden Panettiere Will Return For 'Scream 6': "We F*cking Won, Scream Fam"
By Jack Irvin and Jake Viswanath
David Schwimmer Doesn't Remember This Classic 'Friends' Episode
By Sam Ramsden
8 Creepy Things You Probably Did In The '90s
By Julie Sprankles
Get Even More From Bustle — Sign Up For The Newsletter