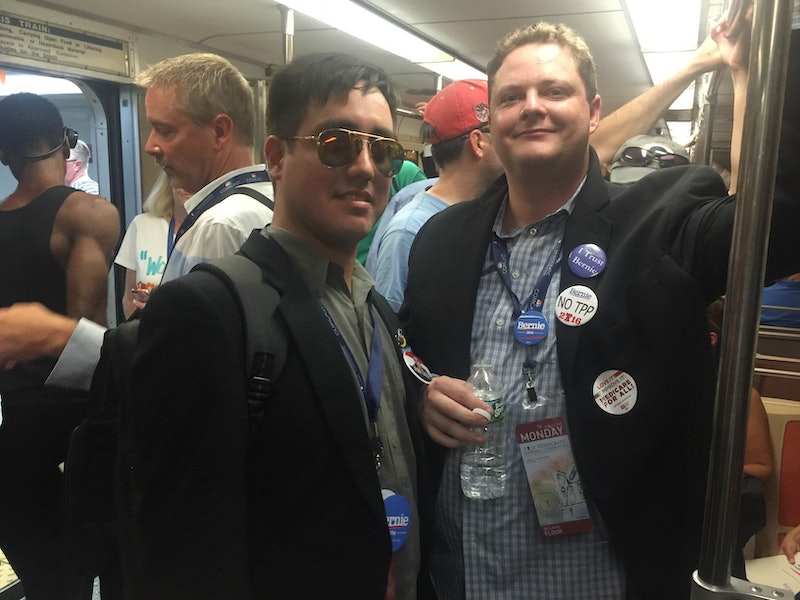 The leak of thousands of email exchanges between Democratic National Committee officials, some of which showcase bias against Sen. Bernie Sanders' bid for the party's nomination, comes at a terrible time for a party eagerly seeking unity going into the general election. The Democratic National Convention kicks off Monday with the theme "United Together," but the title doesn't quite mesh with the feelings of a number of Sanders delegates in attendance. After a meeting with soon-to-resign DNC chair and Florida Rep. Debbie Wasserman Schultz on Monday, several Florida delegates for Sanders have strong words for her. Bustle has reached out to the DNC for comment on the emails and Wasserman Schultz's resignation.

Even before the email scandal meeting, Wasserman Schultz was "universally not well-liked by Bernie Sanders supporters," 33-year-old Florida delegate Adam Woodhall tells Bustle. "Obviously, we all had theories about what she's been doing to undermine his campaign, and I guess after Wikileaks, we just kinda got the evidence to reconfirm it." And though the DNC has apologized for the "inexcusable" emails, Woodhall says that about a third of the meeting's attendees were Sanders supporters, and they were booing from the moment Wasserman Schultz entered, and sustained their vocal dissent the entire time she spoke.

Giancarlo Espinosa, a 29-year-old Florida delegate, tells Bustle that what he perceives as a lack of unity within the party was what Sanders delegates exposed during the meeting. "Any PR thing that [Wasserman Schultz has] had, it's been, 'Oh, we're unified, everything is utopia, and it's perfect down here in Florida,' but then we get there [and] I think we were loud enough there that we sort of leaked into her microphone, so there's no way to get it out of the media's video," he says. Both Woodhall and Espinosa say they will vote for the eventual Democratic nominee in November.

Not all delegates from Florida were so certain about their plans. "I'm not sure what I want to do in November yet, because you know what, the Democratic Party has pissed us off," says 19-year-old Daniel Carter. "Especially this week, with what we've seen in the media with the emails. And they haven't issued an apology for anything. So it's like... why should I have to vote for her just because I'm afraid of Donald Trump?"

Florida delegate Lori Vrochopoulos, 47, expresses the same inability to say what she'll do in November if Clinton is nominated, which is expected to happen on Tuesday. She tells Bustle that she "wasn't at all surprised" by the email leaks, and that when it comes to the Wasserman Schultz meeting, "The Bernie supporters were loud and clear in not supporting her. She actually had to be taken away from the podium until the Bernie supporters tried to calm down a little bit."

Vrochopoulos isn't placated by Wasserman Schultz's announcement that she would resign as committee chair. She tells Bustle that Wasserman Schultz will just assume a "tighter role" as Clinton's "surrogate and campaign manager" going forward.

The negative views held by these and other delegates toward Wasserman Schultz, the Democratic National Committee, Clinton, and the party in general expose divides that continue to run deep on the first day of the convention. Sanders is slated to speak Monday night in an attempt to encourage his supporters to get behind Clinton. The delegates who spoke with Bustle made it clear that "party unity" has not yet, and may not still, be achieved.

Additional reporting and images by Alexi McCammond and Emily Shire/Bustle