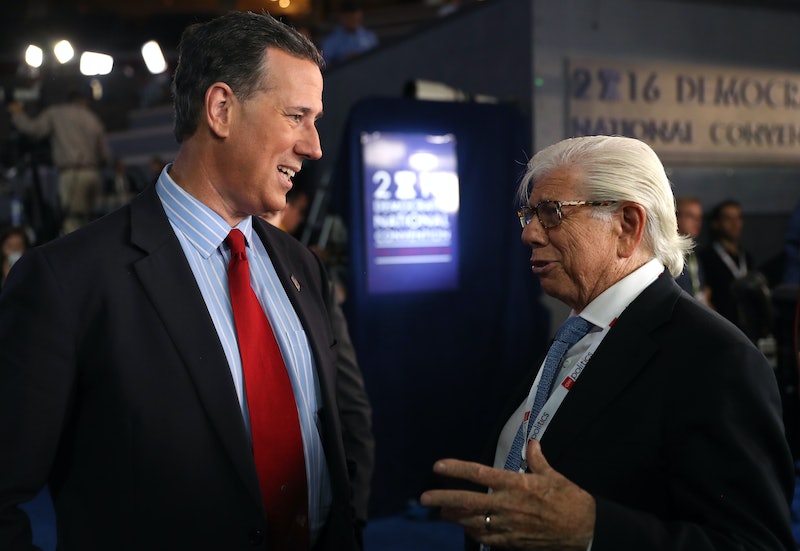 The 2016 Democratic National Convention officially kicked off Monday in Philadelphia, and it's definitely been off to an unusual start. The convention started by being overshadowed by another email scandal — specifically, WikiLeaks leaked 20,000 internal DNC emails, prompting DNC chair Debbie Wasserman Schultz's resignation. The Clinton campaign is blaming Russia, Bernie Sanders' theory that the DNC was conspiring against him actually appears to be true, the DNC has apologized to him for the emails... oh, and former GOP presidential hopeful Rick Santorum made an appearance at the convention. Yup, that's a lot. So why is Santorum at the DNC?

Santorum was one of the many original GOP hopefuls who ran his 2016 campaign until the Iowa caucus in February before dropping out and endorsing Florida Sen. Marco Rubio. And on Monday, Santorum was spotted at the DNC. Is he a secret Democrat? Well, no. Santorum was initially spotted at the DNC while speaking with CNN's Brooke Baldwin, and was allegedly doing a great job of "countering DEM spin," according to a tweet from political commentator Scottie Nell Hughes.

And according to Santorum's own Twitter account, he was at the convention for an "RNC at the DNC" event, where he spoke about presumptive Democratic nominee Hillary Clinton with RNC chair Reince Priebus and Matt Schlapp of the American Conservative Union. The GOP is likely going to capitalize on DNC's new email scandal over the coming week, and what better place to do so than at the Democratic Convention itself?

A local NBC News affiliate reported that the RNC was setting up their own counter-conference in Philadelphia for Trump supporters and the anti-Clinton camp. However, given that it's a pro-Trump event, it's not likely to garner much support from Dems at the convention — even if they're not totally into Clinton. According to WTHR, Priebus said they set up their mini-conference in order to "give a voice to Americans who have had enough of the Clintons' cronyism and corruption. Our mission is to expose the long and scandalous history of Hillary and Bill Clinton right here in the Democrats' own backyard."

The RNC will be at the DNC all week, and will be streaming their counter-event online. They've also set up a chronology of Clinton scandals, which they're calling the "Scandal Tour," and have provided a list of events that date back to 1978.

So there you have it. It would appear that the GOP, including Santorum, just didn't get enough at last week's RNC.