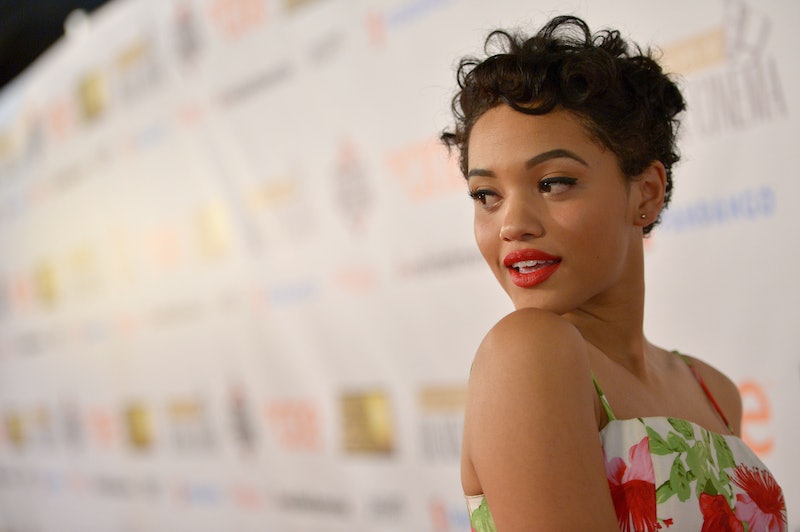 Landing a role in a superhero movie is major for any actor, but when a rising star scores a part, you know it means big things for their future career. Dope actress Kiersey Clemons is about to know exactly what that's like, because, according to Variety, Clemons will star in DC's upcoming superhero movie The Flash. The new film, which will also star Ezra Miller as Barry Allen (a.k.a. the titular Flash) after his Justice League debut, is definitely one fans of the DC Universe should look forward to — but which role will Clemons herself have in the universe? According to Variety, "insiders" into the new movie state that Clemons will portray Iris West in the upcoming film, and if the new movie is staying true to the comics, Iris' role in The Flash should be a big one.

Though it's unclear how true to the original comics the new Flash film will stay, The Mary Sure reports that Iris is a journalist who was adopted by scientist Ira West. While working as a writer for Picture News, she meets Barry, a scientist working for the Central City PD, and the two fall in love and eventually get married. On The CW's TV show version of The Flash, the characters are life long friends rather than lovers, but romantic tension has bubbled below the surface, despite Iris' relationship with Eddie. Iris is certainly a major part of Barry's life, so it's safe to say that Clemons will be one of the most important people to the superhero in the upcoming film as well.

But will Clemons play Barry's love interest? Right now it seems that the new movie is keeping that part of Clemons' character under wraps. Variety has only reported that Iris will be a "friend" of Barry's, which is a bit ironic considering that the new footage from the Justice League film revealed Barry joining up with Batman's squad in an effort to make some new pals. Perhaps, much like Peter Parker and Mary Jane in the original Spider-Man franchise with Tobey Maguire, Barry and Iris will have a bit of a "will-they-won't-they" going on before officially getting together in a different movie.

No matter how the new Flash writers Clemons' character, this new role is one of a lifetime for the young actress. Joining the DC Universe is a very big deal, and I can't wait to see how Clemons works amongst the meta humans.

More like this
The 'Hocus Pocus' Sequel Finally Has A Release Date & It Makes Total Sense
By Shannon Barbour and Radhika Menon
One Powerful Quote In 'Doctor Strange 2' Is Going Viral On Twitter
By Alyssa Lapid
What Does Doctor Strange’s Third Eye Mean?
By Arya Roshanian
Elizabeth Olsen's Chris Evans Friendship Update Was Accidentally Hilarious
By Grace Wehniainen
Get Even More From Bustle — Sign Up For The Newsletter