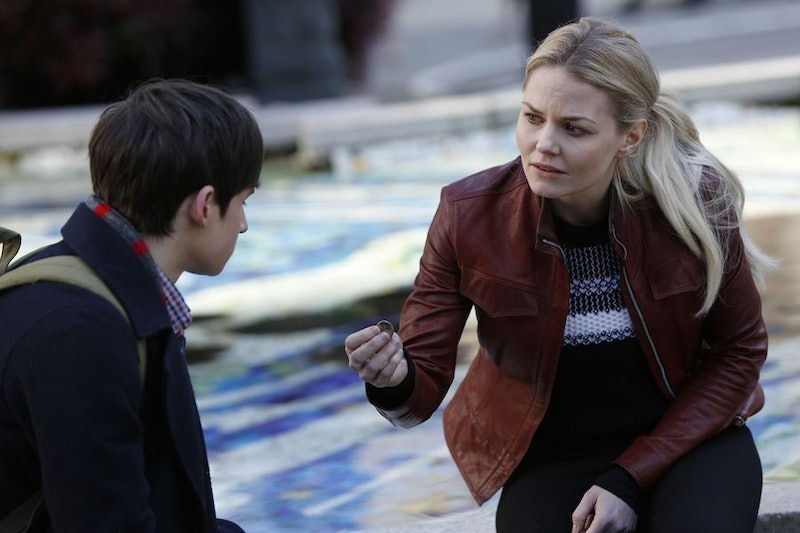 Once Upon A Time goes through so many magical lands and dangerous curses that it's hard to keep track of everything that the Charmings, their friends, and their rather extended family have been through. Before every new season, I try to do a quick refresher. Luckily, Once Upon A Time Season 5 will be on Netflix starting August 26, so we'll all be able to go back to Camelot and the Underworld once more.

When the show comes back for new episodes, Season 6 will feature many literary characters and some Disney references in the form of Aladdin, who on the ABC series is a Savior like Emma. Sorry, fans of Once Upon A Time In Wonderland, Naveen Andrews is not reviving his role as Jafar. The villain will instead be played by Oded Fehr from The Mummy and Stitchers . Jasmine, on the other hand, will be played by Karen David from Galavant — fun! We'll also see more of Jeckyll and Hyde, as well as The Count of Monte Cristo and Morpheus from Greek Mythology.

As for Season 5, if you're not feeling up to a full re-watch, here are some key and particularly entertaining episodes that you should make sure to see before the show returns. While a few new faces were introduced, so many characters returned this season that it really was a nice reward for the fans who've stuck with the show for so long.

Come for the Dark Emma angst, and stay for Henry flirting with Violet the Camelot girl with an iPod.

I always love Belle best when she's on a side mission, and this one with Merida is no exception.

Merlin's backstory was romantic and heartbreaking. If you watch any episode from Season 5A, make sure it is this one.

The Hercules, Snow White, and Meagara story is so fun! Unfinished business quests were the best part of the Underworld.

We're hitting a strong point in Season 5, and speaking of strong, here's the return of Gaston! I was glad we got to learn more about him.

It may not be the pairing you hoped for, but OUAT finally got a real LGBT relationship.

Once, young Zelena and Regina actually go along and it was so cute. Plus, the David/James face-off in this episode was just too good.

There's no way we've seen the last of Cleo Fox and her daughter Tasha. Time to start looking for clues.

I hope there's more of the "Land Of Untold Stories" in Season 6, don't you?

In the second half of the finale, we meet the literary characters coming up in Season 6 — plus, Henry miraculously convinces a bunch of New Yorkers to stop and listen to him, I mean, believe in magic. OUAT finales are always a bit of a departure, and this one set up the next Season in a few ways that are particularly exciting and unpredictable. What will Hyde do? How will everyone react to two Reginas?

More like this
8 LGBTQ+ TV Shows & Movies Like 'Heartstopper' To Watch On Netflix
By Alyssa Lapid
What’s New On Netflix: A Victoria Justice Rom-Com & The Return Of David Letterman
By Arya Roshanian
What’s New On Netflix: The Return Of 'Bling Empire' & A Rebel Wilson Comedy
By Arya Roshanian
Netflix Just Revealed When 'Never Have I Ever' Seasons 3 Will Premiere
By Gretchen Smail and Alyssa Lapid
Get Even More From Bustle — Sign Up For The Newsletter