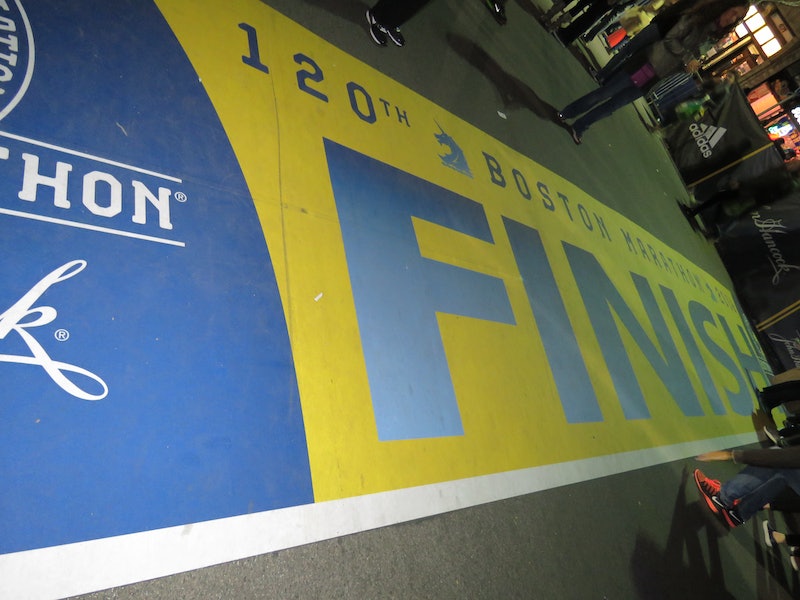 Since my early teen years, running the Boston Marathon has been on my bucket list. Boston’s signature marathon is arguably the most renowned and celebrated road race in the nation. Growing up an hour outside of the city, the event itself has always been close to my heart. I guess that’s why I found myself applying to run my inaugural Boston Marathon with the Massachusetts-based Dana-Farber Marathon Challenge just one month after my October 2015 wedding. Many people would cringe at the idea of taking on any kind of challenge so soon after planning a wedding for almost 200 guests. However, as a Type A personality, I couldn’t end 14 months of wedding planning by sitting around — I needed another big “project” to occupy my mind.

Shortly after making my decision, I shared my plans with my new husband, Andrew, and his response surprised me: He wanted to join me in an 18-week journey to the starting line in Hopkinton, Massachusetts. Initially, I thought it might be a bad idea. For more than a year, I had tortured him with walking up and down appliance aisles at Bed Bath & Beyond, researching photographers and videographers, and quadruple-checking the spelling and grammar on our invitations. Didn't he want a break before jumping right into another exhausting long-term “project” with me?

Lucky for me (and our marriage), he was excited to join me on the new journey I was about to embark on. And apparently, I still had a lot to learn. Here are four things I discovered about our relationship while training for a marathon alongside my best friend.

1. Quality Time Doesn’t Have To Be Spent Over Romantic Dinners

There’s a slight — OK, sizeable — lifestyle change that occurs when you devote months of your lives (as newlyweds, no less) to training for a marathon. Gone are the days of returning from work and vegging out on the couch until bedtime. And those late Friday nights out with friends that don’t even begin until 11 p.m.? Not happening. That’s the time you should be crawling into bed (that is, if you aren’t asleep already), not hopping into an Uber en route to a bar. We traded Sunday morning brunches drinking mimosas for joint long runs, rewarding ourselves with bottles of lemon-lime Gatorade, bagels, and a kiss with a compliment: “Nice work out there!”

Yet for all of these tradeoffs, it’s the lifestyle we both chose. We decided to make the most of our decision by using our runs together as a chance to share details of our day and make plans for the weeks ahead. Instead of having separate hobbies, we were able to devote time together to an activity we both love. Some couples cook together, others tour wineries together. We are the sweaty couple who pass those brunch-goers on our way to crushing a dozen miles. And to us, that’s (better than) OK.

2. Becoming A Team Doesn’t Mean You Won’t Have Differences

Andrew and I had completely opposite approaches to training. With my Type A personality, I follow training plans strictly once I commit to physically and mentally preparing for a race. Since Boston was my second marathon, I decided on an intermediate training plan and printed multiple copies of my schedule to keep both at home and at work. I also designated a daily calendar to log thoughts from each day’s run, including total mileage and time, average pace, pace per mile, heart rate, and my overall feeling after the workout. Meanwhile, Andrew kept a log — of only his distance and time — by filling in a blank calendar that he created in Excel.

At the beginning of each week, I knew exactly how far I would run each day and anticipated how long each run would take to complete. Andrew, on the other hand, had a vague idea of the total weekly mileage he wanted to accomplish. As I stuck religiously to my plan, Andrew constantly made adjustments, depending on his mood on any given day. And as I (mostly) checked off the expected mileage for each day with a satisfying slash, Andrew often grinned and said he would make up the lost mileage the next day... or sometime later that week.

But, at the end of our training, our individual methods worked because we both felt healthy and strong as we toed the starting line.

3. Helping Each Other Succeed Is About More Than Just Motivation

Having a training partner can hold you responsible for your runs, especially on days you actually want to skip a workout when the temperature is below freezing. But a partner also can be a voice of reason, realizing when you might be pushing yourself too hard or when you might need rest because of a nagging cold. There were times Andrew reminded me that it’s OK to miss a day or two of training if I worked late hours or just mentally needed a calm Tuesday night to drink red wine and watch reruns of Modern Family.

I didn’t become laid-back by any means. But being aware of Andrew’s lax attitude toward training allowed me to ease up if I was mad at myself for running slower than I had anticipated, or for not completing a full speed workout.

4. A Good Teammate Will Cheer You On, No Matter What

Sure, I beat Andrew by 10 minutes and improved my personal marathon record by 20 minutes. The outcome was a positive one for both of us — he beat his personal best by eight minutes — and we celebrated as such afterwards with rounds of beer and juicy burgers overflowing with cheese and bacon on top.

But if the marathon had ended differently — if Andrew had crossed the finish line before me or if I had added 20 minutes to my time — he’d still love me for embarking on one of my dreams and fulfilling it in my favorite city on Earth. If we stripped away our different personalities, training routines, and competition, we were still husband and wife at the end of the day.

Having a significant other is the ultimate team experience, and that’s the one team I know I’ll be able to count on through life. Training for the Boston Marathon reminded me of that reality.