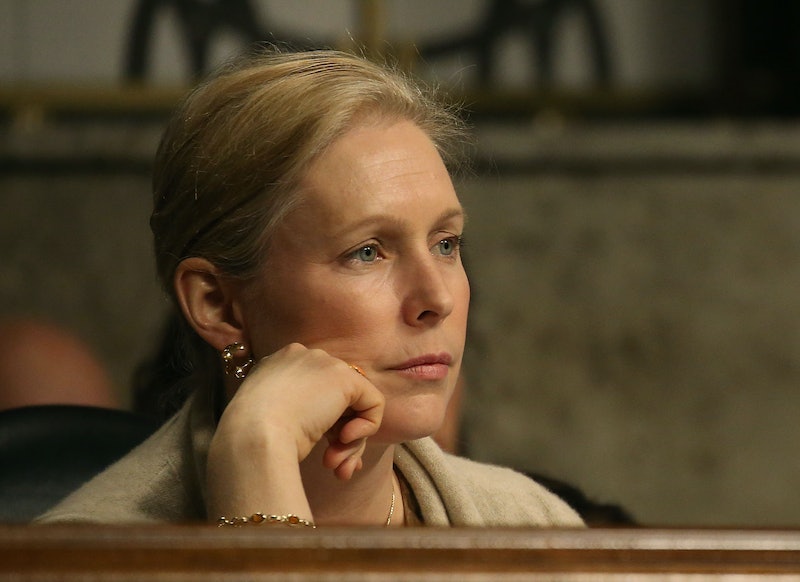 The Democratic National Convention kicks off on Monday, featuring several top Democratic lawmakers and the theme of "United Together." Among the top speakers being discussed are Sen. Bernie Sanders — who has the most crucial role in pushing for party unity — along with First Lady Michelle Obama and keynote speaker Sen. Elizabeth Warren. Another senator with some serious progressive clout took the stage as well: Sen. Kirsten Gillibrand, whose speech emphasized what she sees as presumptive presidential nominee Hillary Clinton's commitment to families. Specifically, Gillibrand focused on Clinton's expressed support for paid family leave.

Gillibrand has served as a senator for New York since 2009. Before that, she was one of the states' representatives. She has fought "Don't Ask, Don't Tell" and worked against sexual assault on college campuses, among other progressive causes. In 2015, Gillibrand reintroduced the FAMILY Act into the Senate, which would guarantee paid leave time for people either taking care of a newborn, a sick loved one, or themselves during illness or injury. And even though Clinton and Gillibrand disagree on how to fund the program — Clinton wants to tax the wealthy, whereas Gillibrand wants a 0.4 percent increase in payroll taxes — they're on the same page concerning the goal. Here's what Gillibrand had to say at the convention:

Some people know me as United States senator from New York. But during school drop off and pick up, I'm better known as Theo and Henry's mom. Like most working parents, my husband and I juggle a lot. We're fortunate to have flexibility, but some days we still barely keep it together.

The vast majority of working parents have it much tougher. They're struggling with too little time, too little money, and too little support. And Washington hasn't caught up to their reality. Families today look almost nothing like they did a generation ago. Eight in 10 moms work outside the home, four in 10 moms are the primary or sole breadwinners, and many are single. Thanks to marriage equality, more children grow up with two moms or two dads.

Yet, today, our policies are stuck in the Mad Men era. We are the only industrialized nation that doesn't guarantee workers paid family leave. Many women can't even get a paid day off to give birth. Most parents work outside the home, yet childcare can cost as much as college tuition. Families rely on women's income, but we still don't have equal pay for equal work. This makes no sense, becasue we know that when families are strong, America is strong.

Hillary Clinton gets it. Not just because she's a working mom, and Charlotte and Aidan's grandmother, but because for her, it's about her core values, the idea we have, that we have a responsibility to one another. It's about who we are as a nation. It's why after law school, she could have gone to a fancy law firm, but she chose to work at the Children's Defense Fund, where she advocated for children with disabilities.

It's why, as America's first lady, she helped create a health insurance program for children, so that 8 million kids could get the care they need. And it's why, as secretary of state, she helped women and children to escape violence and poverty, to attend schools, support their families, and reinvest in their communities. And it's why, as president of the United States, she will bring our workplace policies out of the dark ages and always, always put families first.

Donald Trump actually stood on a debate stage and said that wages are “too high.” Hillary knows that in the richest country in the world, it’s unacceptable that a mom with two kids working full-time still lives in poverty.

Donald Trump thinks that women should just work harder because – and I’m quoting – “You’re gonna make the same if you do as good a job.” Every woman in America knows that’s not true! Hillary believes that women deserve equal pay for equal work.

The choice in this election could not be clearer. If you believe in the values that have always made us great, if you believe in keeping America great, then support Hillary Clinton. Thank you and god bless this great nation.