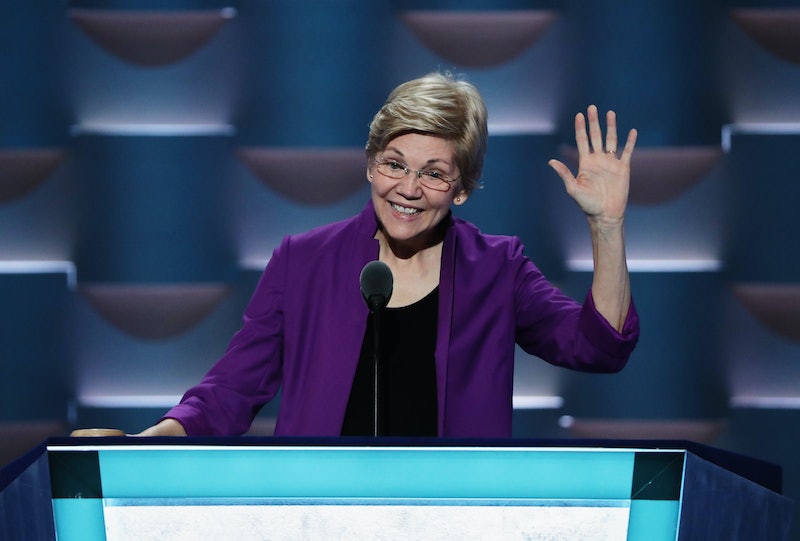 For months, Massachusetts Sen. Elizabeth Warren has been taking on Donald Trump. She has called out the Republican nominee's bigotry, denounced his business practices, and resolutely rejected his proposal to build a wall on the U.S.-Mexico border. On Monday night, Warren took her criticism of Trump to the Democratic National Convention. In her speech, Sen. Warren called for unity and criticized Trump's efforts to generate fear of the "other."

To explain why Trump's vision would be disastrous for America, Warren pointed to the power imbalances that would result from Trump's proposals. "Trump thinks he can win votes by fanning the flames of fear and hatred," Warren said. "By turning neighbor against neighbor. By persuading you that the real problem in America is your fellow Americans ... When we turn on each other, bankers can run our economy for Wall Street, oil companies can fight off clean energy, and giant corporations can ship the last good jobs overseas."

The decision to make Warren the convention's keynote speaker was a significant and intentional one. She is quite popular among progressive factions of the Democratic party, including many people who supported Vermont Sen. Bernie Sanders in the primaries. Warren's endorsement of Hillary Clinton and her speech at the convention were therefore attempts to rally the party around the presumptive nominee, to ensure a victory against Trump in November.

You can read the full transcript of Warren's speech below:

Thank you, Joe, and thank you to Massachusetts for the great honor of serving as your Senator. Wow! What a night. Michelle Obama. Cory Booker. And we still have Bernie coming up. Bernie reminds us what Democrats fight for every day! Thank you, Bernie!

We are here tonight because America faces a choice, the choice of a new president.

On one side is a man who inherited a fortune from his father and kept it going by cheating people and skipping out on debts. A man who has never sacrificed anything for anyone. A man who cares only for himself — every minute of every day.

We're here today because our choice is Hillary Clinton! I'm with Hillary!

For me, this choice is personal. It's about who we are as a people. It's about what kind of country we want to be. I grew up in Oklahoma. My daddy ended up as a maintenance man, and my mom worked for minimum wage at Sears. My three brothers served in the military. The oldest was career, 288 combat missions in Vietnam. The second worked construction. The third started his own business. Me? I got married at 19 and graduated from a commuter college in Texas that cost $50 a semester. The way I see it, I'm a janitor's daughter who became a public school teacher, a professor, and a United States Senator. America is truly a country of opportunity!

Look around. Americans bust their tails, some working two or three jobs, but wages stay flat. Meanwhile, the basic costs of making it from month to month keep going up. Housing, health care, child care — costs are out of sight. Young people are getting crushed by student loans. Working people are in debt. Seniors can't stretch a Social Security check to cover the basics.

And even families who are OK today worry that it could all fall apart tomorrow. This. Is. Not. Right!

Here's the thing: America isn't going broke. The stock market is breaking records. Corporate profits are at all-time highs. CEOs make tens of millions of dollars. There's lots of wealth in America, but it isn't trickling down to hard-working families like yours.

Does anyone here have a problem with that? Well, I do too.

People get it: the system is rigged.

So-called experts claim America is in trouble because both political parties in Washington refuse to compromise. Gridlock!

That is just flat wrong. Washington works great for those at the top.

Democrats have taken on those fights. Democrats fought to get health insurance for more Americans. Democrats fought for a strong consumer agency so big banks can't cheat people. We fought, we won, and we improved the lives of millions of people — thank you, President Obama!

Yes, we won, but Republicans and lobbyists battled us every step of the way. Five years later, that consumer agency has returned $11 billion to families who were cheated. And Republicans? They're still trying to kill it.

I'm not someone who thinks Republicans are always wrong and Democrats are always right. There's enough blame to go around. But there is a huge difference between the people fighting for a level playing field, and the people keeping the system rigged.

To every Republican in Congress who said no: this November, the American people are coming for you!

And where was Donald Trump? In all these fights, not once did he lift a finger to help working people. Why would he? His whole life has been about taking advantage of that rigged system. Time after time he preyed on working people, people in debt, people who had fallen on hard times. He's conned them, he's defrauded them, and he's ripped them off.

Look at his history. Donald Trump said he was "excited" for the 2008 housing crash that devastated millions of American families because he thought it would help him scoop up more real estate on the cheap. Donald Trump set up a fake university to make money while cheating people and taking their life savings.

Donald Trump goes on, and on, and on, about being a successful businessman, but he filed business bankruptcies six times, always to protect his own money and stick his investors and contractors with the bill. Donald Trump hired plumbers and painters and construction workers to do hard labor for his businesses, then told them to take only a fraction of what he owed or fight his lawyers in court for years.

Donald Trump knows that the American people are angry — a fact so obvious he can see it from the top of Trump Tower. So now he's insisting that he, and he alone, can fix the rigged system.

Last week Donald Trump spoke for more than an hour on the biggest stage he's ever had. But other than talking about building a stupid wall, which will NEVER get built, really, did you hear any actual ideas? Did you hear even one solid proposal from Trump for increasing incomes, or improving your kids' education, or creating even one single good-paying job?

And Donald Trump has a tax plan to give multi-millionaires and billionaires like himself an average tax cut of $1.3 million — a year. You're struggling to put your kids through college, and Donald Trump thinks HE needs a million-dollar tax break!

Trump's entire campaign is just one more late-night Trump infomercial. Hand over your money, your jobs, your children's future, and The ­­­­­­Great Trump Hot Air Machine will reveal all the answers. And, for one low, low price, he'll even throw in a goofy hat.

And here's the really ugly underside to his pitch. Trump thinks he can win votes by fanning the flames of fear and hatred. By turning neighbor against neighbor. By persuading you that the real problem in America is your fellow Americans — people who don't look like you, or don't talk like you, or don't worship like you. He even picked a vice president famous for trying to make it legal to openly discriminate against gays and lesbians.

That's Donald Trump's America. An America of fear and hate. An America where we all break apart. Whites against blacks and Latinos. Christians against Muslims and Jews. Straight against gay. Everyone against immigrants. Race, religion, heritage, gender, the more factions the better. But ask yourself this. When white workers in Ohio are pitted against black workers in North Carolina, or Latino workers in Florida, who really benefits?

"Divide and Conquer" is an old story in America. Dr. Martin Luther King knew it. After his march from Selma to Montgomery, he spoke of how segregation was created to keep people divided. Instead of higher wages for workers, Dr. King described how poor whites in the South were fed Jim Crow, which told a poor white worker that, "No matter how bad off he was, at least he was a white man, better than the black man." Racial hatred was part of keeping the powerful on top.

And now Trump and his campaign have embraced it all. Racial hatred. Religious bigotry. Attacks on immigrants, on women, on gays. A deceitful and ugly blame game that says, whatever worries you, the answer is to blame that other group, and don't put any energy into making real change. When we turn on each other, bankers can run our economy for Wall Street, oil companies can fight off clean energy, and giant corporations can ship the last good jobs overseas.

When we turn on each other, rich guys like Trump can push through more tax breaks for themselves and then we'll never have enough money to support our schools, or rebuild our highways, or invest in our kids' future.

When we turn on each other, we can't unite to fight back against a rigged system.

Well, I've got news for Donald Trump. The American people are not falling for it! We've seen this ugliness before, and we're not going to be Donald Trump's hate-filled America. Not now, not ever!

I come to you as the daughter of a janitor, a daughter who believes in an America of opportunity. The hand of history is on our shoulders. We know how to build a future, a future that works not just for some of our children, but for all of our children. We know, and we must have the courage to make it happen.

This is about our values, our shared values with our candidates Hillary Clinton and Tim Kaine!

We believe that no one, no one, who works full time should live in poverty. Hillary will fight for raising the minimum wage, fair scheduling, paid family and medical leave! And we're with her!

We believe every kid in America should have a chance for a great education without getting crushed by debt. Hillary will fight for refinancing student loans and debt-free college. And we're with her!

We believe that after a lifetime of hard work, seniors should be able to retire with dignity. Hillary will fight to expand Social Security, strengthen Medicare, and protect retirement accounts. And we're with her!

We believe that oil companies shouldn't call the shots in Washington, that science matters, that climate change is real. Hillary will fight to preserve this earth for our children and grandchildren. And we're with her!

We believe — and I can't believe I have to say this in 2016 — in equal pay for equal work and a woman's right to control over her own body! Hillary will fight for women. And we're with her!

We believe we don't need WEAKER rules on Wall Street, we need stronger rules, and when big banks get too risky, break 'em up. Hillary will fight to hold big banks accountable. And we're with her!

We believe that the United States should never, never, sign trade deals that help giant corporations but leave working people in the dirt! Hillary will fight for American workers. And we're with her!

And just one more. We believe we must get big money out of politics and root out corruption. Hillary will fight to overturn Citizens United and return this government to the people! And we're with her!

If you believe that America must work for all of us, not just the rich and powerful, if you believe we must reject the politics of fear and division, if you believe we are stronger together, then let's work our hearts out to make Hillary Clinton the next President of the United States!