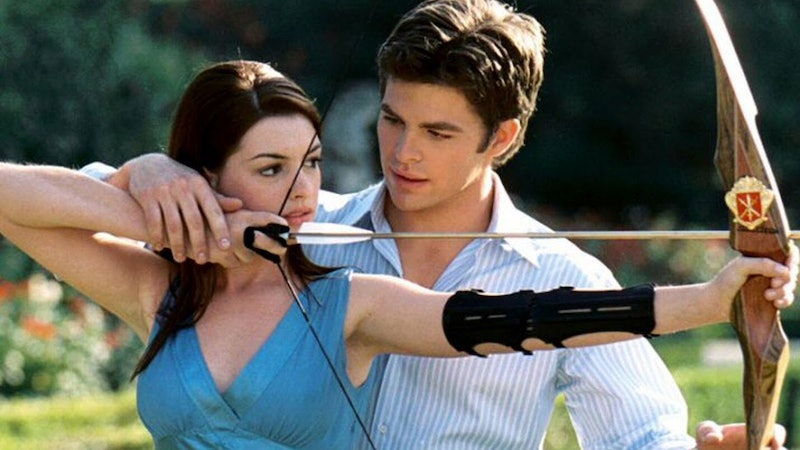 If you didn't previously dream of a secret grandmother arriving on your doorstep to tell you that you were the princess of a faraway land, you likely did after seeing The Princess Diaries for the first time. I know that I did: the film that launched Anne Hathaway's career was also one that reignited the princess fantasies I thought I put to rest after I outgrew Disney movies. (Just kidding, like you can ever outgrow Disney movies.) Of course, The Princess Diaries was just that — fantasy. My parents weren't secretly royalty, and neither was I — as much as I wanted to be a part of the royal court of Genovia. Speaking of that tiny European country, is the Princess Diaries' Genovia actually a real place?! Err, sorry to burst your bubble, kids, but Mia Thermopolis' kingdom is total fantasy.

In the film, Genovia is described as a small country that is famous for pears. It's nestled right between Spain and France, which means that your study abroad trip would totally include a visit to this country. Sadly, though Genovia totally sounds like the name of a real country (possibly because it kind of sounds like the real city of Genoa, Italy) it's the work of fiction. Writer Meg Cabot, who penned the original Princess Diaries book series. Here's what Cabot said inspired her to write the books in the first place, as noted on her official website:

"I was inspired to write The Princess Diaries when my mom, after the death of my father, began dating one of my teachers, just as Mia’s mom does in the book! I have always had a “thing” for princesses (my parents used to joke that when I was little, I did a lot of insisting that my “real” parents, the king and queen, were going to come get me soon, and that everyone had better start being a LOT nicer to me) so I stuck a princess in the book just for kicks… and VOILA! The Princess Diaries was born."

It sounds like The Princess Diaries was as little bit of wish fulfillment for the author, so it's no surprise that she came up with an equally awesome sounding country for Mia to one day rule over.

Of course, just because Genovia isn't a real place doesn't mean that it can't have a tourism site. Website Visit Genovia was seemingly designed as a travel destination for parties interested in checking out the wonderful "white sand beaches, turquoise waters, and sun-filled skies" of Mia's kingdom, where the temperature is a lovely 75 degrees year round.

Sadly, you can't board a plane to Genovia — but you can visit the country in both Princess Diaries films and the 11 books in Cabot's series. Sometimes fantasy really can be better than the real thing — you just saved yourself super expensive airfare.