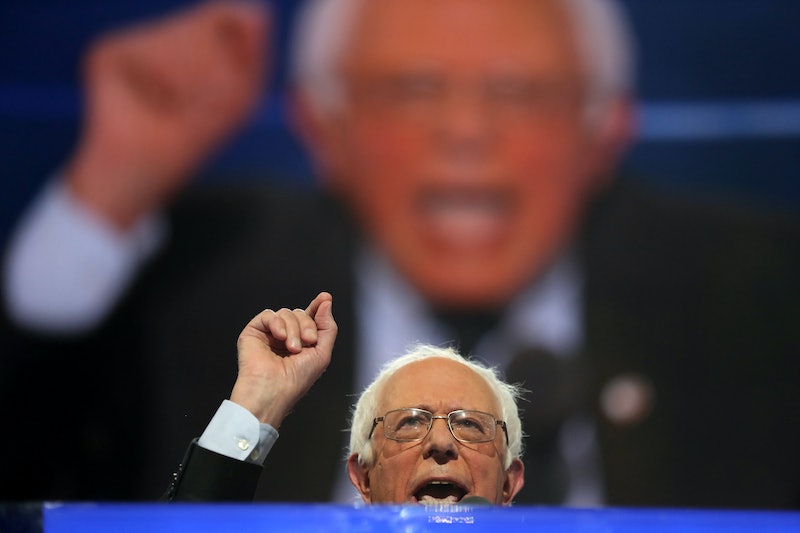 It was the speech everybody had been waiting to hear. On Monday night, Bernie Sanders delivered a firm, fair, impassioned speech outlining the fine points of the revolution he's fought so hard far, and concluding that Hillary Clinton and the new Democratic platform were light years closer to it than Donald Trump. Without missing a beat, Donald Trump subtweeted Sanders: "Bernie Sanders totally sold out to Crooked Hillary Clinton. All of that work, energy and money, and nothing to show for it! Waste of time," he jeered. Sanders responded to Donald Trump perfectly: "Never tweet," he wrote back. Drops mic.

Bernie's tweet was reminiscent of Clinton's infamous tweet in early June: "Delete your account," she wrote to the now-official Republican frontrunner, winning praise for — for once! — using Twitter just like "the kids" do. Sanders, of course, had had no problem in terms of "the kids" relating to him, but the tweet after that swan song-esque speech was the icing on the cake.

He came, he saw, he drove Hillary Clinton more to the left than anybody else possibly could have — and then he took down Donald Trump in a couple of words. Done and done.

"Sad to watch Bernie Sanders abandon his revolution. We welcome all voters who want to fix our rigged system and bring back our jobs," Donald Trump had tweeted snidely about the Vermont senator earlier in the night. Given how passionate Sanders' supporters feel about the senator personally, it's difficult to picture a die-hard Sanders supporter reading Trump's jab and wanting to side with Trump over the individual that the candidate himself supported.

Sanders had cemented his support for the presumptive Democratic nominee earlier that night, saying frankly:

Any objective observer will conclude that — based on her ideas and her leadership — Hillary Clinton must become the next president of the United States. The choice is not even close.

You could even speculate that Sanders' simple takedown of The Donald is another indication of his support for Clinton: "Never tweet" and "Delete your account" are two of the most common comebacks on the microblogging platform.