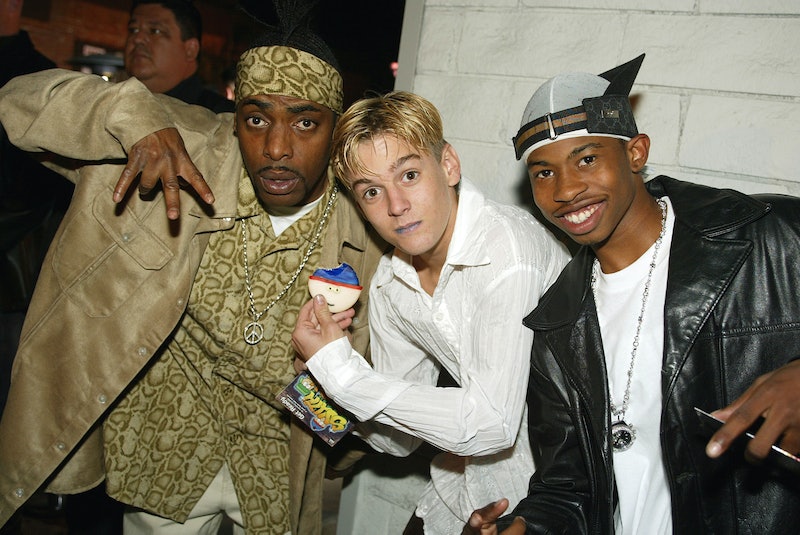 Long before Justin Bieber was performing Chris Brown covers on YouTube, there was Aaron Carter. The bleached blonde brother of "the cute Backstreet Boy" Nick Carter, the child rapper exploded on the scene seemingly out of nowhere, bringing the world novelty rap songs and sparking conversations about the power of nepotism in the entertainment industry. That's not to say that the kid pop star didn't have chops — after all, the now 28-year-old put out his platinum album when he was only 13 years old, which is something that plenty of well-respected bands simply can't boast about. Perhaps the reason that 2001 album, titled Oh Aaron, went platinum has to do with the titular track, which subverts the whole "your only famous because your brother is!" thing by directly addressing it. I'm pretty sure I'll never get the rhymes Carter sing-talked in "Oh Aaron" out of my head, and the truth is, I don't want to.

If you don't remember the lyrics to "Oh Aaron," let's start with the basic premise of the song. The track is essentially a lesson in the dangers of hubris: after bragging to his pals about his brother's Backstreet Boys gig, Carter inadvertently offers comped tickets to literally thousands of people. Oh, Aaron, what are we going to do with you? How about put you on stage as the show's opening act to earn the cash — which is exactly what happens in the song. Earning a career from your colossal mistake probably isn't the best lesson here, but fortunately, the rhymes in this song are so ridiculous it makes up for it. Here are 11 amazing rhymes from the song that you need to read again to believe:

1. "Going around the room talking about our favorite noise/I said I had a brother in the Backstreet Boys"

Of course Carter would make anything he needed to rhyme with Backstreet Boys.

2. "Is this some kind of trick/Which one is he?/The blonde one, Nick!"

Because it would be weird for Carter to say "the cute one."

3. "Then the cutest girl said/I have to see their show/But I have no ticket Aaron/How can I go?"

Just in case you forgot what teenagers will do for validation, I present you with "Oh, Aaron."

4. "See it's no problem hon/In fact I'll get some tickets here for everyone"

You could have stopped at just the cute girl, man. You really could have.

5. "All I gotta is pick up the celly/And it's a done deal/Let me call Nick and tell 'em"

Does not even close to rhyme.

6. "By the way Aaron/If you could, while you're at it/Can you hook up some seats/For my friends and my parents?"

There's a line that should have been drawn in the sand, and that line is when mom and dad come into the picture.

7. "So I said to myself/Well heck, why not?/Nothing can beat the connection I got"

I mean, you could actually be in the Backstreet Boys.

8. "I can get you maybe a dozen/You can't promise seats to everyone and their cousin"

Slow clap for Nick, being the voice of reason for greedy 13-year-old boys everywhere.

9. "Hook me up, Nick/I swear I'll pay you back!/Now come to think of it/We need an opening act"

The moment when this song stops being a novelty rap and starts being a straight-up biography of Carter's rise to fame.

10. "I want you on stage/I want you to rap/Cause if you don't you're going to have some disappointed friends/By the way you're on at eight that's when the show begins"

Oh, so you promised your friends over $30,000 worth of Backstreet Boys tickets, and as punishment, you get to open for the Backstreet Boys, who somehow didn't have an opening act hours before their concert? Yep. Seems legit.

'Oh Aaron' is a classic for a reason: it's literally Carter's origin story.