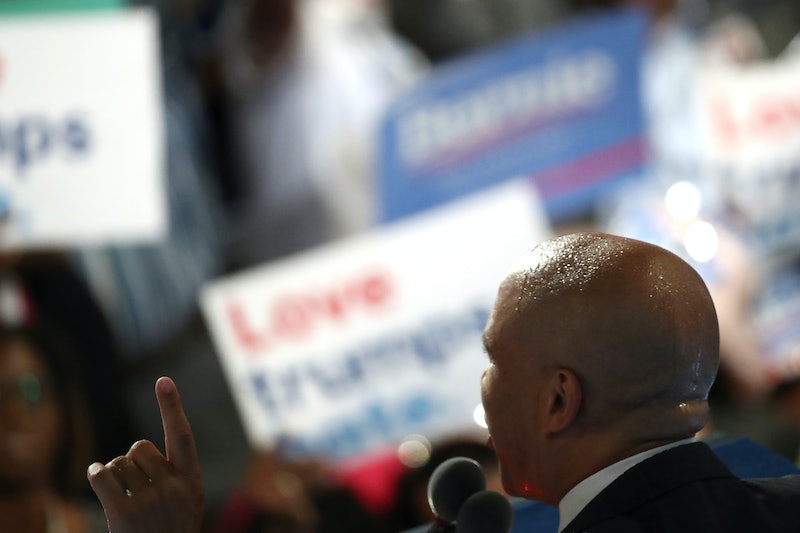 It may only have been the first night of the Democratic National Convention, but Monday night's stage was lit up with a cast full of amazing, electrifying speakers. Most notably, what Cory Booker said about Hillary Clinton even caused the presumptive nominee's husband to smile. Though the potential for hurt feelings on Booker's end was there, he not only took her decision in stride, but also gave her a glowing endorsement.

Booker was considered by many to be a candidate for Clinton's running mate before she ultimately chose Virginia Sen. Tim Kaine. When it came to reasons why he supports Clinton, the senator described the former secretary of state's humanitarian resume:

Long before she got in politics, she was in Massachusetts going door-to-door collecting the stories of children with disabilities. In South Carolina, she fought to reform the juvenile justice system so that children wouldn't be thrown in adult prisons. In Alabama, she helped expose the remnants of segregation in schools. In Arkansas, she started a legal aid clinic to make sure poor folks could get their day in court.

She has fought for the people, and she's delivered. That's why we trust her to fight and deliver for us as president.

Booker was so complimentary and compelling that towards the end of his speech, the camera panned towards Bill Clinton, who was shown smiling and cheering on the New Jersey senator.

Booker continued the convention's overarching theme of unity in his allusions to the Founding Fathers and the Declaration of Independence by claiming that although the declaration was of independence from British rule, it was also an "historic declaration of interdependence." He added, "If this country was to survive, we had to make an unusual and extraordinary commitment to each other." He mentioned interdependence twice more: once when comparing Clinton's platform of American unity over Trump's "zero-sum" mentality, and again during his conclusion.

Let us declare, again, that we are a nation of interdependence, and that in America, love always trumps hate.

Let us declare so that generations yet unborn can hear us. We are the United States of America. Our best days are ahead of us.

In his speech, Booker made it clear, while speaking over shouts of "war hawk" (presumably from Sanders delegates), that he believes Clinton's experience and background in politics and public service make her the candidate Americans need. Similarly to Elizabeth Warren, Booker cited Clinton's values as the reasons behind his endorsement, and referred specifically to her belief in fair wages, education, paid family leave, anti-bigotry, and criminal justice and police reform.

Booker could have snubbed Clinton for picking Kaine over him for her vice presidential candidate, but instead chose to deliver a moving and thought-provoking speech. It's certain that at least one Clinton is now a Booker fan, and that he's destined for great things far beyond this election cycle.