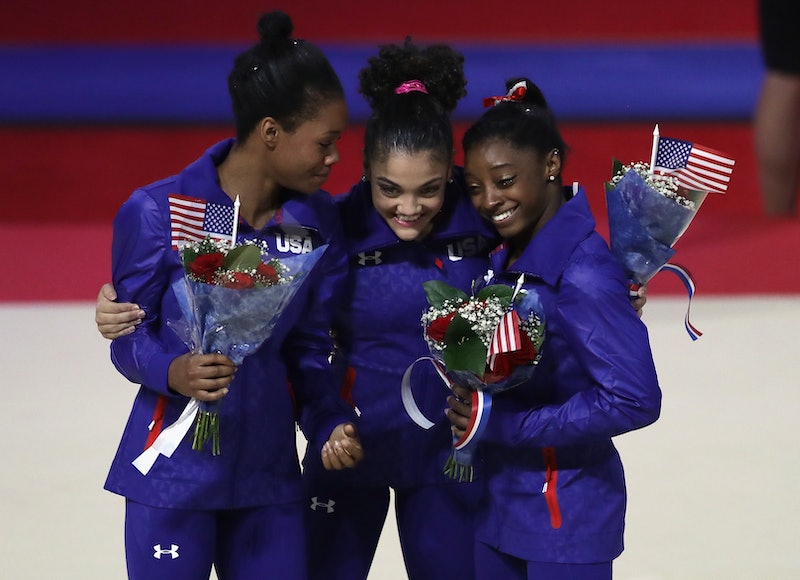 The Rio Games are just around the corner, and with the thousands of hours of coverage, it's a bit tough to keep track of your favorite Olympics events. I don't know about you, but I'm already worried about missing some events this August. One thing that would make me feel better about the sheer amount of events to watch would be knowing that I'll have another chance to catch them, and luckily, that seems to be the case. Not only will NBC replay the 2016 Olympics on TV, according to the network's Olympics website, but you should be able to watch at least some events after they air online and on different devices as well.

NBC will be airing tons of Olympics coverage across many affiliate networks (including TELEMUNDO, Bravo, CNBC, Golf Channel, MSNBC, NBC Sports Network, NBC UNIVERSO, and USA Network, as well as specialty channels for basketball and soccer), and somehow, even with so many plates spinning in the air, there's room for replay — at least on NBC. According to the NBC Olympics website, "on most days," NBC will air daytime Olympics coverage from 10 a.m. to 5 p.m. ET/PT, primetime from 8 p.m. to 12 a.m. ET/PT, late night from 12:35 to 1:35 a.m. ET/PT, and then replays from 1:35 to 4:30 a.m. ET/PT. That's not enough time to replay all of the events from the day, but hopefully, viewers will get to catch the highlights if they stay up that late. The only other network to specify replays is the Golf Network, which will air "highlights" and recaps of Olympics golf, among other coverage. That doesn't mean other networks won't air highlights of some kind, but with a whopping (and unprecedented) 6,755 hours of coverage to get through, there are only so many hours left to re-air past events.

But if you're worried about staying up until 4 a.m. to catch replays, there's no reason to panic. Even with the veritable mountains of programming to get through, there's always a little invention called "DVR" to help ensure you watch everything you want to. NBC may not be replaying things during prime hours on broadcast TV, but that doesn't mean you can't facilitate your own recordings and rewatchings.

As previously mentioned, there's also streaming to consider. Not only will NBC have a live stream of the Olympics available (in case you're not home but just need to see a certain event), but the network's Olympics website already has replays and highlights available of early events, such as the group rounds of women's soccer. However, there is one possible setback: To access both the live stream and other videos, you'll need to login with your cable subscription information. NBC will also make certain events available to watch on 4K Ultra HD one day after they air, as well as highlights. According to Engadget, in the U.S. 4K Ultra HD can be accessed through DirecTV, Dish, Comcast and EPB.

The NBC Sports app also offers Olympics live streams, full replays, highlights, and more, and is completely free — you just have to login with your cable subscription. If you have one of those, you can download the app from the Apple app store, Google Play, the Windows Store, and the Sony Roku, and access it on compatible devices.

If you'd rather use a different device, Playstation Vue allows you to livestream and record various networks, including NBC, which makes it a great option for anyone who might have cut the cord on their cable TV. Subscription plans start at $39.99 per month, and it might be worth looking into if you really, really need to catch the Olympics this summer and own a Playstation or Roku device. It comes with on demand and DVR features, which further simplify your access to all the Olympics coverage coming our way.

There are definitely a lot of ways to ensure you catch your favorite Olympics events this year, so don't let the thousands of hours of coverage intimidate you. With all of these options, you should be able to catch the best of Rio in a way that fits with your own summer schedule.

More like this
What Is Jeanie Buss' Net Worth? The Lakers President Is Uber Rich
By Hugh McIntyre
The 10 Best Waterproof Watches For Swimming
By Lauren Moison
Jake Daniels Just Became The UK’s First Active Football Player To Come Out As Gay Since 1990
By Sam Ramsden
Kylie Jenner Roasts Kendall For Her Cucumber Cutting Skills On TikTok
By Jake Viswanath
Get Even More From Bustle — Sign Up For The Newsletter