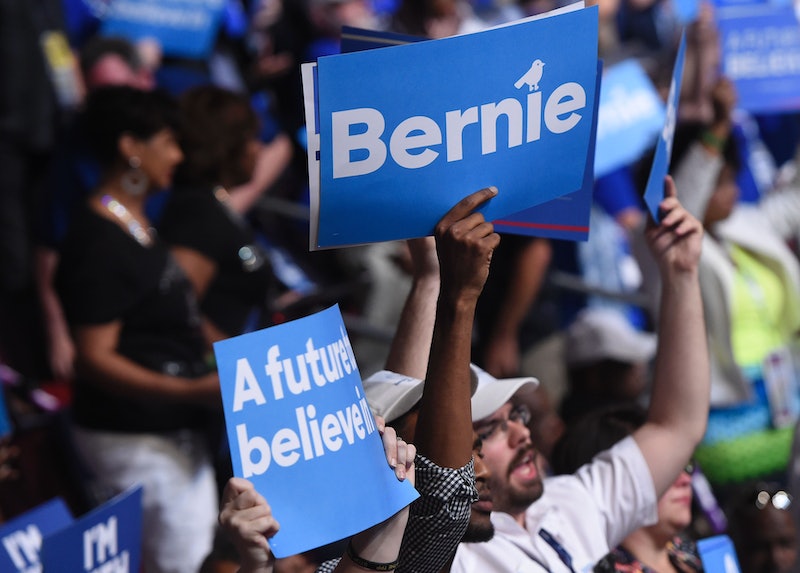 Monday night at the Democratic National Convention in Philly, some Bernie Sanders delegates were still not with her. Quite the opposite. As they filed out of the convention hall, groups of Bernie-or-bust supporters held up signs and shouted, "Hey, hey, DNC, we won’t vote for Hillary.” Not exactly a showing of party unity to begin the week. But there's a silent majority of Bernie diehards who will vote Clinton, recognizing the need to come together, per the senator's wishes.

Polls point to this. The Washington Post reported Monday the results of a new Pew survey which shows that even consistent Sanders supporters are now with her. By "consistent," they mean that the voters have indicated three times that Sanders is their man — they haven't wavered in their support or switched from one candidate to the other. Some 90 percent of these Sanders fans say that they will nonetheless be voting for Hillary Clinton in November.

It could just be that the remaining 10 percent are over-represented in Philadelphia, given their engagement with the party and, most importantly, their candidate. That would explain the day of chaos. But among the throngs of Bernie-or-busters, there are Sanders supporters who will vote for Clinton — they might just be a little quieter.

One of those is Homaira Naseen, a Sanders delegate from Massachusetts. The 59-year-old is at a political convention for the first time. She said she's "proud to be part of the history," and is all about Sanders. But she will vote Hillary, she tells Bustle. "I believe in supporting the party, and it's all about unity," she says. "This is a game that we have to win. So come November, I'm going to support the party. But Bernie is my man. I stand behind Bernie's values and his ideology."

The same goes for Timothy Butts of Houston, Texas. He's a Sanders delegate, but he said he would do what his candidate asked and support Hillary. "...based on what Bernie told me today, I'm going to do what he wished me to do, which was support Hillary," he tells Bustle.

The 53-year-old, third-time delegate said he would try to sway his fellow Sanders supporters to consider Clinton, now that Sanders has asked him to. He has a theory about why it has been so difficult for some to move on: "Given that we had two excellent candidates, in particular Bernie being as progressive and positive, and a great mentor, I think that's where it really strikes home. That's why you have this reaction. ... As I'm talking to a lot of my fellow delegates, I'm finding it's almost like the grief process. You go through the shock of realizing somebody died or somebody's changed where they were. So you react. And I think that's what we're seeing — a lot of people are reacting to how they feel.

That doesn't mean they won't ultimately switch to Clinton, though. Part of the grief process is acceptance. Butts explained: "When it comes down to brass tacks and they're really respecting what [Bernie's] wishes were, they're going to say, 'He asked us to do this, so this is what we're going to do.'" He explained the division were seeing as "the democratic process" — not something to worry about.

As for a potential roll call vote on Tuesday, Butts said he thinks the nomination process should go smoothly: "I imagine there might be some comments, but overall, we're going to switch and we're all going to support Hillary. That's what I anticipate."

Naseen agrees: "I hope there is no fight, because I think Democrats are a lot more cultured, more civil. They're in here for uniting the party."

As Sanders said Monday, "Together, together, my friends, we have begun a political revolution to transform America, and that revolution, our revolution, continues." Now the task turns to getting the Sanders holdouts to go to the polls this November.