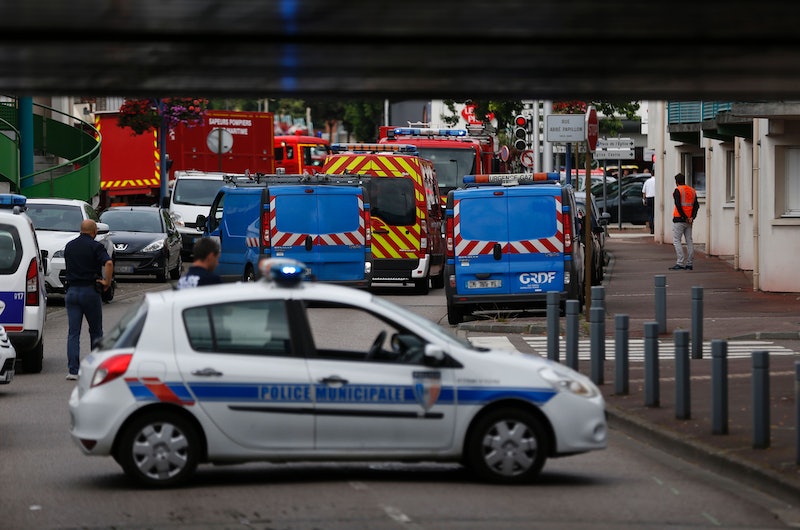 In Normandy, France, on Tuesday morning, a priest, Father Jacques Hamel, was killed when two terrorists took him, two nuns, and two parishioners hostage inside a Catholic church. The 84-year-old priest was celebrating mass when the attackers entered. Police arrived quickly to the scene and a hostage situation began. During the standoff, Hamel's throat was slit by the terrorists. One of the other hostages is in serious condition; the other three left unharmed.

Police shot the two terrorists dead. French President François Hollande told the media that the men were "two terrorists in the name of Daesh [an alternate name for ISIS]." This is the second attack in almost as many weeks: A man in Nice drove a truck through a crowd of people watching Bastille Day fireworks killing 84 people. Hollande traveled quickly toward Saint-Étienne-du-Rouvray, the city where the attack took place, and declared his intention to beat the terrorist group, which has targeted France in many of its attacks. "Daesh has declared war on us. We have to win that war," he told journalists.

ISIS claimed responsibility, The Washington Post reported. The ISIS news agency, Amaq, called the attackers "soldiers" of the group. The Wall Street Journal reported the ISIS spokesman claimed the attack was a "response to U.S.-led coalition attacks in its self-declared caliphate in Syria and Iraq."

The Vatican responded. Through a spokesman, Pope Francis spoke out on the killing, denouncing "the pain and horror of this absurd violence." He said the killing of a priest is "barbarous" and said the attack was particularly awful since the "horrific violence took place in a church, a sacred place." Dominique Lebrun, the Archbishop of Rouen, which oversees Saint-Étienne-du-Rouvray, said he cries out to God, and "would invite non-believers to join in the cry."

"The Catholic Church cannot take weapons other than those of prayer and brotherhood among men," he added.

Hamel, the priest that was killed, was "a man who fulfilled his role to the end," a local woman told The Guardian. "He was elderly but was always available for whoever. He was a good priest," she said. "He has been here for a long time and many parishioners knew him well. He lived in the rectory at Saint-Étienne-du-Rouvray." Hamel served as the the assistant priest at the church. The main priest was on vacation near Paris and was rushing back.

France has been on high alert since November when attacks at a Paris soccer stadium, the Bataclan night club, and restaurants resulted in the death of 130. Border checks have been instituted and the state of emergency was declared. That was set to expire this month but was extended for another three after the Nice attack.