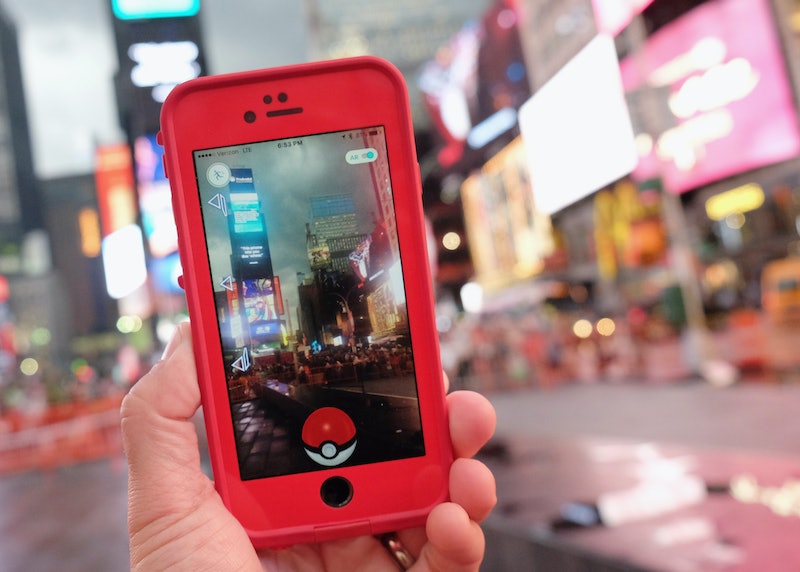 All of a sudden, people are coming to love the one thing that I was unabashedly obsessed with well into my late-teens: Pokémon. The games, the show, the cards — as a complete and total Pokémon nerd, I loved 'em all. And now with the recent launch of Pokémon Go, a mobile game that relies on augmented reality to catch the pocket monsters and challenge gyms, the world has become equally obsessed with the likes of Pikachu and company. It has even seeped into our everyday political discourse — from Hillary Clinton making a somewhat cringe-worthy Pokémon pun, to the DNC stage looking like a giant Pokéball, it seems like Pokémon is turning up just about everywhere you could possibly imagine.

Such was the case during the first night of the Democratic National Convention on Monday. As an astute writer from Mic named Mathew Rodriguez pointed out, the glowing DNC stage looked awfully familiar to those of us who have had our heads buried in our phones while Pokémon hunting recently. Indeed, it looked as though Vermont Sen. Bernie Sanders was speaking on top of a giant, radiating Pokéball. Maybe the DNC was trying to cash in on this pop culture phenomena?

For what it's worth, it seemed that the Pokémon craze had at least carried over to those attending and watching the DNC:

Still waiting on the (probably) inevitable moment when Clinton will tell voters to "Pokémon Go to the polls" again. Fingers crossed it makes it into her acceptance speech.