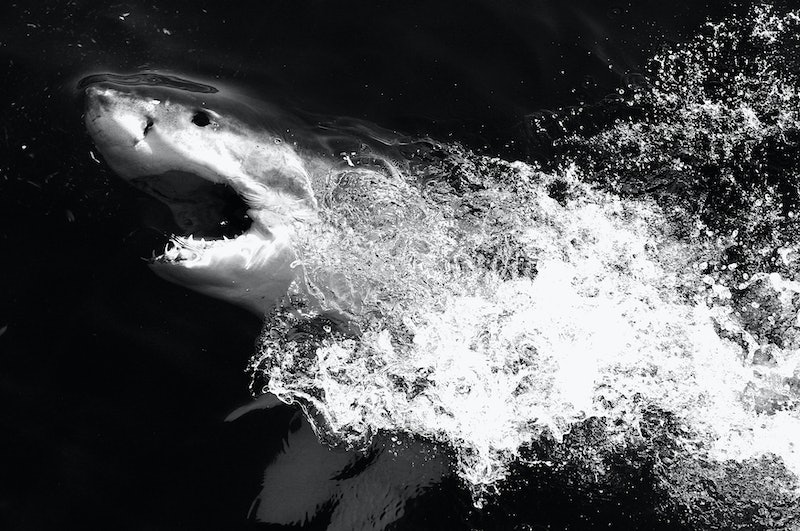 Sharks have been movie stars for decades now, and particularly since the advent of Shark Week and the Sharknado franchise, increasingly weird permutations of sharks have become fodder for tons of TV movies, like Ghost Shark, which is literally about the ghost of a shark killing a group of beach-goers in their pools, hot tubs, and showers. And even though there's obviously no real connection between the spirit of ravenous, murderous Great White Sharks and actual reality, there is an actual creature called the "ghost shark." I don't want to disappoint you, but unfortunately, it's not the literal ephemeral ghost of long dead sharks. Instead, the real ghost shark is named for its creepy appearance, which almost resembles a ghost the way its white skin, oversized, glassy eyes, and large fins combine to give it an otherworldly air.

The actual ghost shark was profiled in an installment of the Shark Week series Alien Shark, where you can see that even though these undersea creatures may have a terrifying appearance, they are actually quite small and only live in the deep, deep sea. According to the Florida Museum of Natural History, ghost sharks are fish that branched off from the sharks 400 million years ago. And as demonstrated by the clip below, you don't have to worry about any ghost sharks chomping on any sexy lifeguards, because they don't have razor-sharp teeth. The Florida Museum of Natural History says they actually have "teeth plates," which they use to eat shellfish from the ocean floor, using their tough grinding abilities in order to break the shellfish exteriors.

The shark in Ghost Shark is nothing like this creature, since, you know, it's supposed to be an actual ghost. But there is some chance that the ghost shark could surprise or freak you out if you ever see it. In addition to the Alien Shark version of the ghost shark, there's also a prehistoric ghost shark that, according to Scientific American, had "an elaborate whorl of teeth set in the middle of its mouth."

Honestly, I think one-on-one I'd rather deal with the ghost of a great white than this version of the ghost shark. But as the Florida Museum of Natural History points out, there's more of a reason for the ghost shark to fear us than for use to fear this odd fish. "It is often sold as silver trumpeter or whitefish fillets and used in fish and chips," meaning that you may have unintentionally consumed ghost shark with some malt vinegar and fried potatoes.

The movie Ghost Shark has some key inaccuracies, most notably its creation of a shark that is literally a ghost, rather than using the real version of a ghost shark that really does exist. No matter how crazy or unbelievable one of these original monster shark movies may be, there's always some kind of inspiration in the real world for the characters in these movies.

More like this
'Ghost In The Shell: SAC_2045' Was Only Supposed To Last Two Seasons
By Kadin Burnett
TikTok's Spooky 'Heartstopper' Fan Theory Will Make You Question Everything
By Nola Ojomu
Shocked Fans & Former Co-Stars React To Ray Liotta’s Death At 67
By Grace Wehniainen
'Stranger Things' Star Joe Keery Is Dating An "Indie Scream Queen"
By S. Atkinson and Grace Wehniainen
Get Even More From Bustle — Sign Up For The Newsletter