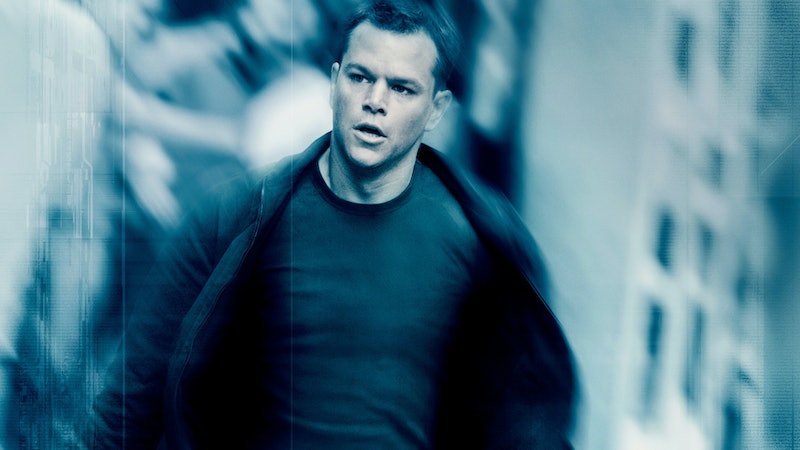 Few things parallel my love for Matt Damon. So if you're anything like me, you're probably pretty jazzed about the opportunity to see the A-lister reprise his role as Jason Bourne in the next movie in the Bourne series. Jason Bourne, in theaters July 29, finds the amnesiac assassin continuing to dig for answers about his past while being pursued by evildoers. It's been almost a decade since the last Bourne movie that featured Damon hit theaters, so you might be struggling to remember Jason's past, too. And if that's the case, you might be wondering when the Bourne movies will be on Netflix, so you can catch up with everything that happened.

Right now, the Bourne movies aren't on the site and available for streaming. The Bourne Identity , The Bourne Ultimatum , and The Bourne Legacy are all available on Netflix DVD, however, but understandably, a lot of people would prefer streaming over getting the movies in the mail. And even if you do decide to go that route, you won't be able to see the whole series, because The Bourne Supremacy , which was the second film in the franchise, is sadly missing from the site's collection of titles. What gives?

What makes this situation extra frustrating is that two of the movies used to be on Netflix. On Oct 1, 2015, The Bourne Identity and The Bourne Supremacy were made available for streaming, and readers of every "What's Coming to Netflix" list rejoiced. But then in late December, the two movies made an appearance on every "What's Leaving Netflix" list, and as of Jan 1, 2016, they were as absent as Jason Bourne's memories. Perhaps the studio wanted fans to actually buy the films before the new one came out and so took them off streaming? Whatever the reason, the fact is that the Bourne movies aren't currently available to stream.

But there is some good news. First, the list of streaming titles on Netflix is fluid, so the Bourne series could certainly be re-added in the future. And if you really want to stream the previous four films prior to Jason Bourne's release, you can do so on Amazon video for a relatively low cost. The movies are available to rent for $3.99 each, so you can marathon the series for a mere 16 bucks. And then you'll be totally up to speed when you go to see Jason Bourne in theaters, so instead of trying to piece together the plot you can just focus on swooning over Damon. Win-win.

More like this
What’s New On Netflix: The Return Of 'Bling Empire' & A Rebel Wilson Comedy
By Arya Roshanian
What’s New On Netflix: The Return Of 'The Circle' & A Mike Myers Series
By Arya Roshanian
Amanda Seyfried Reflects On 'Mean Girls' & "Gross" Remarks That Men Made After It
By Jake Viswanath
'Dirty Dancing's Jennifer Grey On The Tearful Moment That Changed Her Relationship With Patrick Swayze
By Sam Ramsden
Get Even More From Bustle — Sign Up For The Newsletter