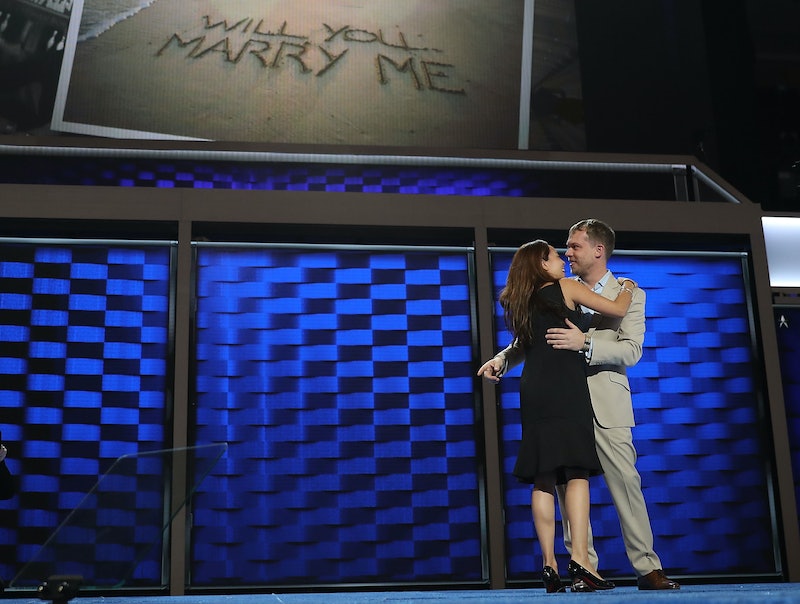 To say that the current election season has been “messy” would an understatement (“apocalyptic dumpster fire” might be more accurate). The RNC was a circus (complete with terrifying orange clown), and the DNC began with the DNC chair stepping down amid scandal. Thankfully, this proposal between two DNC staffers is the shot of sweetness we all need — a reminder that amid all of the fear and anger that has fueled this year’s election, there are things in life that can still manage to be adorable.

According to the Daily Mail, DNC staffers Andrew Binns and Liz Hart met in Mumbai three years ago when they were both working in the advance team for Joe Biden’s 2013 visit to India. Now, they both work for the Democratic National Convention Committee in Philadelphia, on “Studio 16,” the convention’s live pre-show.

On Sunday night, Binns brought Hart onto the convention stage. She thought they were going to pose for a photo, but soon a large screen started showing images of the couple throughout their relationship, with “Can't Stop the Feeling” by Justin Timberlake playing in the background. The montage ended with a photo of “Will you marry me?” carved in sand on a beach. Binns proposed, she said yes, and the crowd — which included the couple’s families — cheered.

How cute is that? I honestly never thought anything at either national convention could make me say, “Awww.”

Hart told NBC of the proposal, “Getting up on stage I just thought we would take another photo together but it turned out to be probably the best photo we will ever have.” You can watch video of the proposal below:

And now, back to our regularly scheduled programming of soul-crushing political drama….