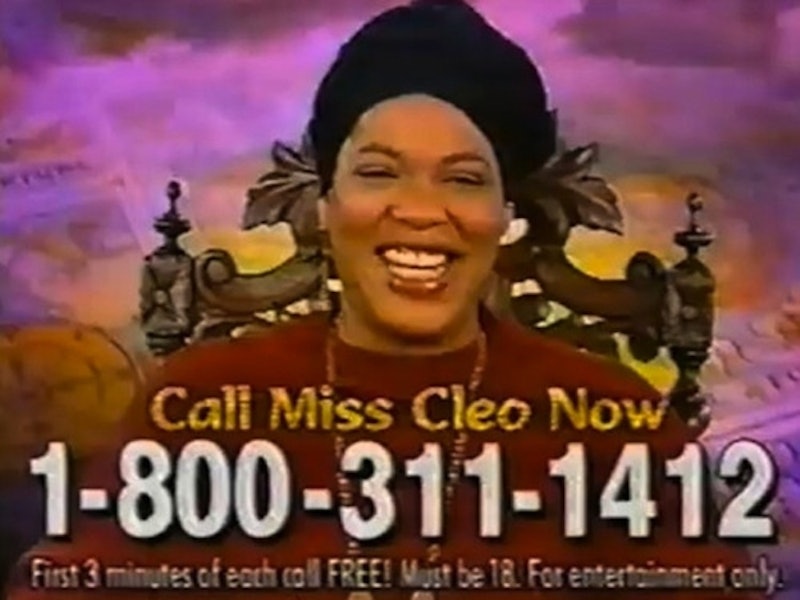 If you grew up in the '90s, then you most definitely recall those infomercials featuring Miss Cleo (real name: Youree Harris) and her ads for tarot readings. In some sad news reported Tuesday by TMZ, Miss Cleo died at 53 after a battle with cancer, which originated in her colon and then spread to her liver and lungs. According to Harris' rep, the TV psychic died Tuesday morning in Palm Beach, Florida surrounded by family and friends. Her rep also added that Harris was a "pillar of strength" throughout her fight against cancer. She was also reportedly discharged to a hospice center after a recent hospitalization, TMZ reports.

There's no way Miss Cleo will ever be forgotten. From her Jamaican accent (according to TMZ, she was born in Los Angeles) to her catchphrases, "Call me now!" and "The cards never lie!" to making the Psychic Readers Network famous, she made a name for herself.

From 1997 to 2002, Harris portrayed Miss Cleo and according to a February 2013 BuzzFeed article, it's pretty certain she was never an actual psychic, but only a voice actor reading a script. Before dubbing herself "Miss Cleo," a March 2002 Seattle P-I article claims she created a character named "Cleo" for a play. "Back then, she was known as Ree Perris and had produced and acted in a play at the Langston Hughes Cultural Arts Center called For Women Only. In it, Perris played a Jamaican woman named Cleo." The site also suggests she once had several different names including, Ree Perris, Youree Cleomili, Youree Dell Harris, Youree Perris, Rae Dell Harris, Cleomili Perris Youree, and Cleomili Harris.

In September 2006, Harris came out in an interview with The Advocate. "There is Miss Cleo, and now it's going to be, Miss Cleo is gay," she said. "I'm not sure how that is going to look, but as much bad stuff has been said about me up to now, what's another slur?" She also admitted in the interview that she did have Jamaican roots and that she wasn't psychic, but a "spiritual counselor or spiritual adviser." She said,

I’m more a shaman, an elder in a community who has visions and gives direction to people in their village. My clients and my students are my village. I take care of this community. If you sit down at my table, you have to take away a lesson and not just learn what is going to happen tomorrow. I also perform weddings — both gay and straight marriages — and house cleansings and blessings.

After her life as a late-night psychic, Harris contributed to Grand Theft Auto: Vice City with a small voice role as Auntie Poulet, but she will she will forever be remembered as Miss Cleo.