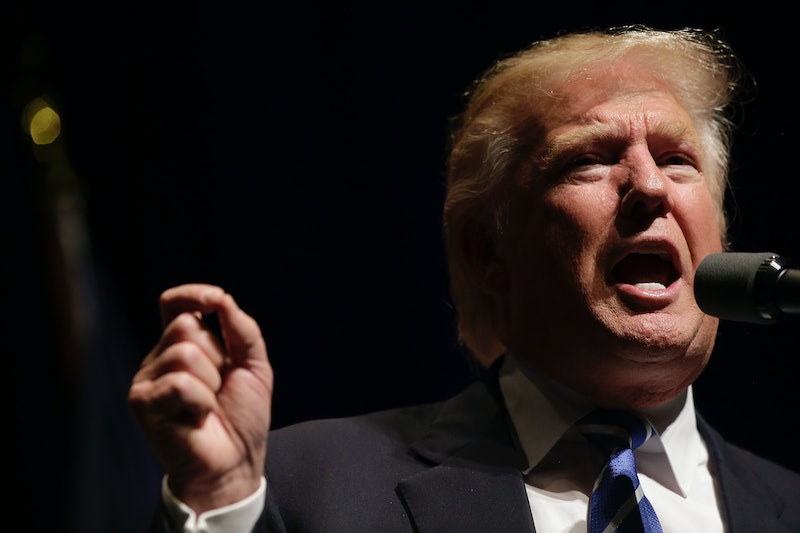 I never believed that being Jewish placed me in any greater danger than anybody else, and certainly not in America. As a non-religious Jew living in a liberal state, my ethnic heritage always seemed like a non-factor to most people around me. However, right now, thanks to Donald Trump's presidential campaign and my experience at the Republican National Convention last week, I don't feel that way anymore. I am, on the contrary, terrified.

Let me start by saying this: By no means are Jews the only minority group with good reason to fear a Trump presidency. Trump puts every non-white American at risk, and there's a strong argument to be made that Hispanics and Muslims in particular would be in even greater danger under a Trump presidency than Jews. That said, I can only speak from my own experience as a Jewish American.

I had received a couple of anti-Semitic comments from Donald Trump supporters on Twitter before I went to the Republican National Convention. Just a few here and there, but they stood out in my mind — I'd never actually been called a kike until then, and that seemed significant.

Trump and his campaign have been playing footsie with white supremacists for a while. There are many examples of this — see the Star of David controversy, or how Trump reacted when asked about the KKK, or any number of other episodes. I don't think Trump himself is anti-Semitic (yes, as many people have pointed out, his son-in-law is Jewish and his daughter converted).

However, Trump certainly seems to be OK with anti-Semitism. More importantly, anti-Semites and neo-Nazis almost universally love Trump. The Ku Klux Klan has endorsed him for president, because "a lot of what he believes we believe in." White nationalist message boards are flooded with enthusiastic Trump supporters.

That's what was on my mind when I watched Trump speak at the Republican National Convention last week. As his speech progressed, a feeling of dread and horror set in, not unlike a bad trip on psychedelics. The language that Trump used was fascistic by any definition of the word — his repeated appeals to "security" and "law and order," his claims that foreign elements are responsible for making the country less safe, his use of lines like "I am your voice."

Not all of Trump's supporters are neo-Nazis. But all of the neo-Nazis seem to support Trump.

The crowd's reaction was equally disturbing. The angrier and more growly that Trump got, the more thunderous the applause he received. Every single time he mentioned immigrants, the arena erupted in boos. Hearing a 6-year-old girl behind me chant "BUILD THAT WALL!" pumping her fist in the air with the fury of God in her voice, is a moment I won't forget.

The next day, I tweeted that being in the convention hall was the most chilling experience of my life (some pointed out that this suggests I've lived a very privileged life, which is absolutely true and I won't deny for a moment). I didn't think much of it, because most of my tweets disappear into the internet and are quickly forgotten. But this particular tweet was reposted by MSNBC anchor Chris Hayes, who has over half a million followers, so it quickly reached a wide audience.

By no means are Jews the only minority group with good reason to fear. Trump puts every non-white American at risk, and there's a strong argument to be made that Hispanics and Muslims in particular would be in even greater danger under a Trump presidency than Jews.

Within five minutes — literally, because it didn't take me more than five minutes to order that cup of coffee — my inbox was flooded with hundreds of hideous, often threatening anti-Semitic comments. Not exaggerating here — hundreds. One of the first respondents invited me to get into an oven. A few said that I was right to be scared, or that worse was yet to come. One person said they're waiting for "#kristalnacht2016." Somebody posted an animated GIF of a giant machine herding Jews into a corner, incinerating them, and displaying an enormous swastika.

I didn't look at every single one of these users' profiles. But I looked at the most vile ones, and every single one was an avowed Trump supporter. Often, I didn't have to do that much research, since a good number of them had usernames like "God-King Mr. TRUMP," or "Make America Great Again" hats in their avatars. Several people sent me images of Trump wearing a Nazi uniform. The tweet with the animation of the Jew-killing machine was accompanied with a #MakeAmericaGreatAgain hashtag.

At this point, I should note that I've met a lot of Trump supporters in person, and I've liked every single one of them. No joke. Every Trump voter I talked to at the convention was genuinely kind and warmhearted — the kind of people I would love to grab a beer with. Not all of Trump's supporters are neo-Nazis. But all of the neo-Nazis seem to support Trump.

But to my white friends who are willing to risk a Trump presidency (and I've never met a #BernieOrBust person who wasn't white), either by staying home or voting third-party, I would ask that you ask yourself this: If you were Hispanic, would you feel that you had this option?

In any event, I don't particularly care if strangers harass me on the internet. This I can handle, and this is not what scares me. What scares me is that these sorts of people are flocking to Trump like bees to honey, and just as importantly, everything Trump has done indicates that he's OK with having their support. This man has a legitimate shot at being the next president, and when the president is OK with neo-Nazis, this gives neo-Nazis a lot of freedom to do things they wouldn't otherwise do.

Yes, Trump has said that he supports Israel. This does not give me any comfort. Many, many Trump supporters have told met that I should move to Israel if Trump becomes president; in this context, the idea that Trump is "pro-Israel" means that he'd allow American Jews to flee halfway around the world in order to escape the consequences of his presidency. That's, uh, not much of a consolation. Also, fuck that, I'm an American.

I don't like Hillary Clinton, and I never have. She's not nearly liberal enough for my tastes, I don't think she's a very good politician, she surrounds herself with toxic advisers, she's needlessly intransigent on things that don't matter, and so on. If you put the name of every federally-elected Democrat into a hat and pulled one out, I would almost certainly rather they be the nominee than Clinton.

But the fact of the matter is that Clinton, as of now, is the only alternative to a Trump presidency. I don't like the two-party system any more than you do, but I know history, and I know presidential elections. With the polls where they are now, there is no rational reason to believe that anyone other than Clinton or Trump will be the next president. Until Jill Stein or Gary Johnson cracks, I don't know, 30 percent in a poll (so far, neither has hit 15 percent, and even 30 percent would be about 10 points behind Clinton and Trump), this will be the only reasoned conclusion to draw.

And this brings me to #‎BernieOrBust. I have many friends who loathe Clinton and say that they cannot bring themselves to vote for her. By voting Clinton, they feel they are condoning both her and the two-party system itself. A Clinton presidency would do nothing to change or diminish the corruption and plutocracy in both the government and our political system as a whole, so better to vote third-party and send a message to the political establishment.

Here's the thing: I don't have the privilege of getting to "send a message" by voting for Stein, Johnson, or anyone else. I don't have that luxury because sending that message directly increases the odds of a Trump presidency (this is a mathematical fact), and a Trump presidency is a direct threat to me and all of the American Jews I know. I'm a cis white guy, so usually, I speak from a standpoint of immense privilege. In this singular, narrow but nonetheless high-stakes situation, I don't.

You may think I'm overblowing the risk. But I'll point out that in the late 19th century (and earlier), Jewish intellectuals warned that a genocide was coming. Those warnings were brushed off, because hey, that could never really happen. And then the Holocaust happened, and a third of Jewish population was wiped off the planet.

I saw someone make this argument to a non-Jewish friend of mine on Facebook. My friend replied that it made perfect sense for Jews to be terrified, and that she herself would feel frightened if she were Jewish. And yet, this friend made clear, she still intends to vote for Stein, and is willing to risk a Trump presidency.

This sentiment, which I've heard from several non-Jewish friends when I bring the issue up, breaks my heart. Because what I hear when I read that is, "I'm OK risking a Trump presidency because I'm not Jewish, so I know I'd be safe. But hey, good luck, Seth." And that, uh, doesn't feel good.

In the early 1930s, Adolf Hitler and the Nazi Party didn't have majority support, and were able to rise only thanks to infighting among the German left. This splintering of the opposition is the only reason Hitler was able to do what he did. I see a similar thing happening among many of my friends right now, and in the streets outside at the Democratic National Convention, and it scares the living shit out of me.

I'm not going to tell anybody how to vote. But to my white friends who are willing to risk a Trump presidency (and I've never met a #BernieOrBust person who wasn't white), either by staying home or voting third-party, I would ask that you ask yourself this: If you were Hispanic, would you feel that you had this option? Be honest. If you were a member of a minority group, would you conclude that the risk of a Trump presidency was one you could afford taking in order to send a message?

Maybe your answer is yes. But if your answer is no, I'd ask a follow up: Do you have any Hispanic, or Muslim, or black friends who you care about? Don't answer, just think about it.