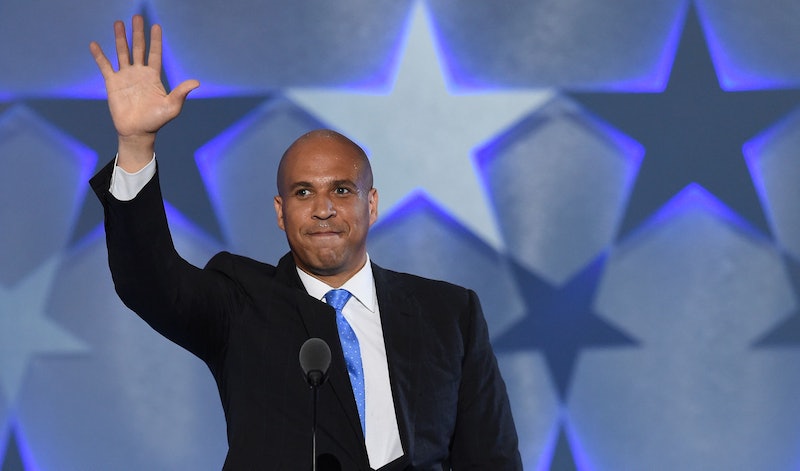 Sen. Cory Booker ignited a fire in the hearts of many delegates and viewers with his speech centered on love and interdependence at the Democratic National Convention on Monday. Of course, not everyone was receptive of his words concerning presumptive nominee Hillary Clinton. When a chant of "Black lives matter!" broke out during his speech, Booker responded to the Black Lives Matter protester not by ignoring him, but with recognition. And that's something politicians, including Clinton, could learn from.

After extolling a number of merits he perceives in Clinton, Booker got to the issue of criminal justice reform. The chant broke out as he said:

[Clinton] knows something that I fight for every day, that our criminal justice system desperately needs reform, that we need to bring back fairness to a system that still, as Professor Bryan Stevenson says, treats you better if you are rich and guilty than poor and innocent.

Whether Booker went off script in what followed or if he had anticipated the chant beforehand isn't clear, but he gave the protester the recognition he, in Booker's words, deserved:

She knows that we can be a nation that both believes police officers deserve more respect, they deserve more support, more cooperation and love — and believe that a black 20-something protestor [points in direction of chanter] deserves to be valued, deserves to be heard, that they should be listened to with more courageous empathy, and that change is needed in the system.

However, there is a tension present in Booker's words. As the term "intersectionality" made its way into politicians' discourse in 2015, not all the pieces that go with it — like the importance of listening to others — were right there with it. Clinton herself was criticized in February for her response to a young black protester at a fundraiser in North Carolina, which some, including CNN commentator Marc Lamont Hill, characterized as dismissive.

The young woman, Ashley Williams, stood with a sign that read, "We have to bring them to heel," and told Clinton that she (Williams) is not a "super-predator," referring to Clinton's oft-criticized statements in support of the 1994 crime bill pushed by her husband when he was president.

Williams asked if Clinton would apologize to black people for the problem of mass incarceration linked to the bill, and Clinton repeatedly insisted that Williams listen to her instead of talking, then said she'd never been asked this before. Attendees of the fundraiser shushed Williams and told her she was being rude. As Williams was removed from the room by security, Clinton said, "OK, back to the issues." Following the event, she told The Washington Post that she regrets using the word "super-predator."

Clinton's tense and defensive exchange with Williams was not exactly the display of "courageous empathy" Booker spoke for on Monday night. But Booker himself made a point to acknowledge the protester and the legitimacy of his concern, serving up a fine example for his fellow politicians.