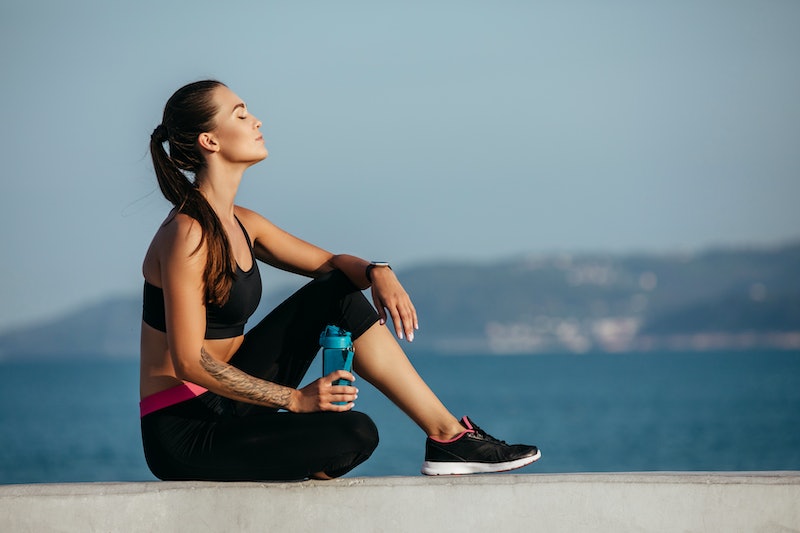 In the summer time, it's too darn hot to exercise outside without switching things up a little. Sticking to your usual routine all year around likely won't cut it comfortably like it did in winter; however it is possible to stay cool in the summer while working out just simply by taking a few extra precautions — and what's more, doing so may also increase your energy output, too. Even though it's way more fun than freezing your extremities off, exercising in scorching hot temperatures really isn't good for us and your body temperature can rise by a whopping 20 degrees during a cardio workout, even if you're in the shade.

Even though many of us would rather not break a sweat at all, when it comes to working out, moving around outdoors is somewhat more enjoyable than hitting the gym. Indeed, studies have shown that outdoor exercise is shown to leave us happier and more motivated than breaking a sweat at the gym, increasing our levels of enthusiasm and leaving us more likely to repeat the process again. Exercise outdoors also makes us work harder and therefore raise our fitness levels. It's worth taking advantage of the many benefits that more sunshine during this time of year can bring us.

With this in mind, here are seven super-smart ways to exercise outdoors and stay cool in the process.

1. DO: Start Your Workout With A Slushie

Risking brain-freeze might be worth it when you're exercising outdoors: Research published in the journal Medicine & Science in Sports & Exercise in 2010 discovered that when athletes drank a flavored slushie before hitting the treadmill in a hot room, they were able to keep going for an average of 10 minutes longer than when they consumed cold, flavored water. It's worth noting that the slushies used in the study were frozen sports drinks, rather than the kind of thing you might get from a machine at a convenience store — so opt for a cool isotonic drink (those with added sodium), which will help your body repair itself faster.

2. DO: Time Your Exercise Well

The dog days of summer might be upon us, but that doesn't mean we have to exercise during the hottest part of the day. If you want to make use of the great weather without drowning your workout gear in sweat and risking your health, just pick your moments carefully. Practicing yoga in the morning before sunrise or after sunset is sensible, as is choosing a workout spot in the shade. It might sound simple, but staying out of the sun as much as possible when exercising is crucial to avoid sun-stroke or heat exhaustion.

You should always look out for any unusual or uncomfortable feelings in your body when you exercise outside. According to the Mayo Clinic, exercising in the heat puts additional stress on your body; if you feel sick and dizzy whilst moving in the sun, it may be your body's way of telling you that your internal thermostat is unable to keep you cool. In other words, you might be at risk of suffering from heat exhaustion, which occurs when your body temperature raises to 104 degrees F (40 degrees C). Key symptoms of heat exhaustion include feeling cold, clammy, dizzy or sick, and experiencing headaches or vomiting during or after exercise. This could lead to exercise-associated collapse — that is, feeling extremely lightheaded or fainting right after a workout — so always take a break and cool off in the sun if you start to display any of these symptoms.

Running in the rain not only makes for a dramatic Snapchat story, but will also keep you cooler when exercising outdoors. (And if you live in the UK like me, there's a high chance that you'll get caught in the rain during any given "summer" month anyway.) For those of you blessed enough to inhabit a climate that actually warms up during the summer, the sunny season can be the perfect time to take up a new sport in the water (or so I hear). Paddle boarding, canoeing, surfing, swimming, or water aerobics — these all keep your body temperature down in the sun whilst giving you a great workout at the same time.

5. DO: Do The Math To Stay Hydrated

You should never wait until your body displays visible signs of de-hydration to reach for that water bottle during summer. Instead, Men's Health recommend s using a simple formula to know when to drink water. Before your workout, start drinking water at least 15 minutes prior to any activity and during exercise, try to down eight ounces of water for every 20 minutes you're moving. Also, don't forget your urine test to check how up on your hydration levels you are; the clearer your pee, the better. If your urine looks more like iced tea than homemade lemonade, though, then you're definitely dehydrated.

If you can bear it, freezing your legs up before your workout might keep you cool and get you moving quicker. Research from the University of Brighton in England showed that icing your legs pre-workout can improve your performance during sports. Study participants who did this ran, on average, 85 seconds quicker in their 5K during 90-degree heat compared to when they went ice-free, according to Mental Floss.

It might sound obvious, but moving and grooving in the outdoor heat whilst wearing your heavy winter outfit can be seriously dangerous. (Hello, overheating.) Instead of donning those super-thick yoga pants, instead opt for light, breathable cottons and thin fabric. You might also cool your pulse points with headbands, neck towels and wristbands, which are designed to absorb your sweat whilst staying cool to touch.