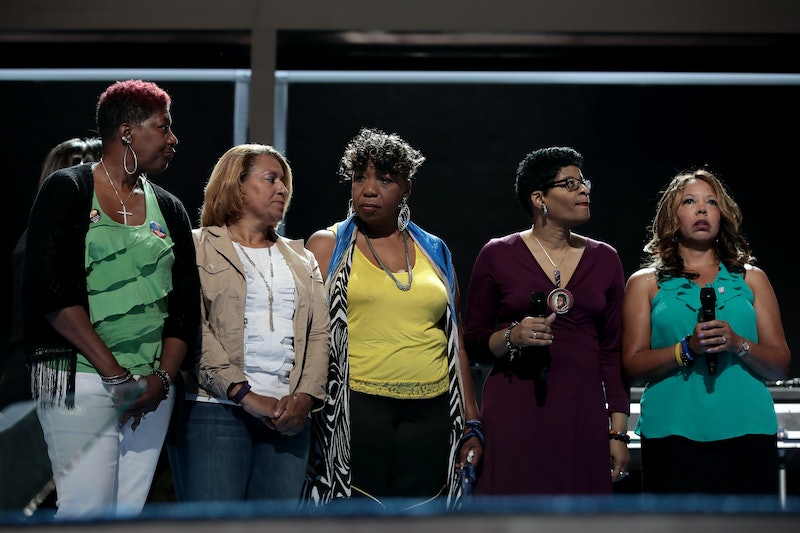 In stark contrast to the "Blue Lives Matter"-fest that was the Republican National Convention, which didn't even attempt to touch on issues of racial injustice, Tuesday's Democratic National Committee will feature "Mothers of the Movement" — mothers whose unarmed black children were killed by police, died in custody, or were slain by gun violence. With Tuesday's emphasis on black lives, Democratic nominee Hillary Clinton makes her pitch to Black Lives Matter and those sympathetic to the movement, who have been vocal critics of her past political stances as well as several clashes along the campaign trail.

Unlike Black Lives Matter, several members of the Mothers of the Movement have been supportive of Clinton's bid for the nomination, and are continuing their endorsement into the general election. On Tuesday, we will hear from the mothers of Michael Brown, Eric Garner, and Dontré Hamilton, each of whom died at the hands of police. Sandra Bland's mother will speak; Bland died while in police custody. We'll also hear from the mother of Trayvon Martin, who was shot and killed by a neighborhood watch volunteer. Hadiya Pendleton and Jordan Davis were the victims of gun violence, and their mothers will be on stage as well in support of Clinton.

"She's been dealing with these kind of systematic issues all along, so her records speak for itself," Lucy McBath, Jordan Davis's mother, told CNN. "So she didn't just join the game. She's been doing the work already, she's been in the trenches, so she understands dynamically the way to move forward to be able to change this."

Black Lives Matter, for its part, has been more critical of the candidate, and did not endorse anyone in the 2016 presidential primary. The recurrent criticisms BLM activists bring up about Clinton were distilled by Alicia Garza, one of the movement's co-founders, in an interview with Elle:

I lived through the Clinton years. Incarceration through the roof, the demonization of poor black women, the unraveling of the social safety [net]. ... Even though white women actually took advantage of government assistance and whatnot, so then black women were deemed the Cadillac drivin', hair in rollers, bon-bon eatin' women with eight kids.

Clinton has, throughout the primaries, backed off her former support as First Lady of the 1994 crime bill spearheaded by her husband, and has acknowledged that welfare needs to be reformed.

Clinton's campaign has also had some direct clashes with BLM. When confronted by a protester at a fundraiser in February, who criticized Clinton's use of the term "super-predator" in 1996 and asked her to apologize for mass incarceration, which disproportionately impacts the black community, Clinton's was perceived as being dismissive toward the young woman, who was escorted out of the room.

Bill Clinton was also the center of criticism when, in April, he defended Hillary's use of the term "super-predator." He said to a group of protesters, "I don't know how you would characterize the gang leaders who got 13-year-old kids hopped up on crack, and sent them out in the streets to murder other African-American children. Maybe you thought they were good citizens — she didn't." This did not help the Clinton campaign in the eyes of BLM. The former president quickly said that he regretted the incident — but also referred to the BLM protesters as "young people ... just trying to get good television."

In that vein, it is significant to note that Bill Clinton will be speaking Tuesday night as well as the Mothers of the Movement. The joint speaking night is not likely an accident — Clinton is striving to present herself as the candidate who will respond to BLM's demands for measures against police brutality and a racially-biased criminal justice system, and she's likely attempting to smooth over past bumps with the movement on Tuesday.