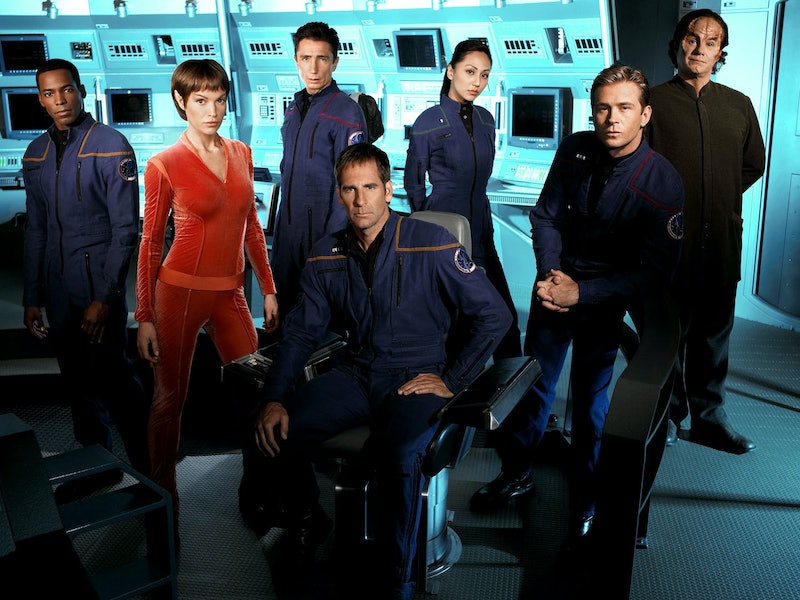 Every Star Trek fan has their favorite series. My personal favorite of the five live-action series is The Next Generation, with Patrick Stewart as Captain Picard. But I also have a pretty big soft spot for the most recent series, Star Trek: Enterprise. This is an unusual choice, I know, as many Star Trek fans cite Enterprise as the worst of the bunch. But I really love it, and with Star Trek Beyond having just hit theaters, it might be a great time to give it a re-watch, if you've seen it already, or check it out for the first time if you haven't. With another Star Trek movie and a whole new series coming up, going way back to the beginning, in terms of story chronology, is a great way to dig further into the franchise.

Star Trek: Enterprise premiered in September 2001 on the UPN network, starring Scott Bakula of Quantum Leap fame as Captain Jonathan Archer, the head of United Earth's first fully functional star ship. Joining him on his mission to explore the galaxy with their brand new Warp 5 engine are humans, Commander Trip Tucker, Lieutenant Malcolm Reed, Communications Officer Hoshi Sato, Ensign Travis Mayweather, and two non-Earthlings, the Denobulan Dr. Phlox, and Vulcan Sub-Commander T'Pol. In the series, humans have been communicating and working with the Vulcans for just over 100 years, after the events of the film Star Trek: First Contact, and are ready to start traveling the galaxy like their alien counterparts. Naturally, starting such an endeavor leads to all kinds of misunderstandings, malfunctions, and worries. The Enterprise NX-01 may be sleek, but like a new pair of shoes, she, and her crew, needs breaking in.

One of the things I love about Enterprise is that it's the closest series to our own time, so not only does it more frequently reference an Earth history that is familiar to the viewer, but it's not as "futuristic" as the other series. Sure they have space ships that can travel at warp, but there's a lot about the first Enterprise that feels pretty quaint. For example, while other Star Trek characters expect doors to open for them, this crew actually has to push buttons. There are no replicators for food or tools. The artificial gravity occasionally fails, sending globs of water (and people) floating through the air. The transporters make the humans nervous, so they still use shuttles to visit any planets or other ships. Oh and there's no United Federation of Planets yet. Humanity has only interacted with a few alien species when Enterprise kicks off, and the creation of the Federation and alliances with other planets are still many years away, making for some hilarious encounters with new alien species. And did I mention that captain Archer has an adorable puppy?

Star Trek: The Original Series was applauded for reflecting the changing times of the 1960s, but Star Trek: Enterprise became just as timely as any of the other series, and in fact, its themes are still relevant in our present day. Since the show premiered just after the 9/11 attacks, eventually its story lines began to incorporate what were were going through at the time. Season 2 of Enterprise ends with an enormous attack on Earth by an alien race known as the Xindi, and the following season is entirely devoted to a multi-planet war. Much like Battlestar Galactica, Star Trek: Enterprise became a post-9/11 allegory that addressed such difficult themes as xenophobia, the sacrifices of privacy to enhance security, the militarization of non-military forces, and an "us vs. them" mentality. With these themes still being discussed today, Enterprise, like all good sci-fi, remains relevant to modern times while exploring the future.

And if you're only familiar with the new rebooted "Kelvin Universe" movies that have been released in recent years and have a sudden urge to explore more Star Trek, starting out with Enterprise makes sense for a number of reasons. Firstly, it's the earliest chronologically in the whole franchise, so there's no need to go back further in time. Second, since director J.J. Abrams introduced the incident with the USS Kelvin (the one that kills Kirk's father) just before The Original Series timeline begins, thus altering the movies' timeline, that means that the events that happen in Enterprise are still relevant. In fact, Star Trek Beyond 's villain, Krall, references the fact that he fought in the Xindi War when talking about his past. So the series contains a history that applies to both the new movies and the older series, and by watching Enterprise, you get the backstory to it all.

Star Trek: Enterprise was cancelled after four seasons and ended in 2005. As for the reason, producer Rick Berman told StarTrek.com, "There are a lot of different guesses one could make about why. I always felt that whoever came up with the term 'franchise fatigue' was right, that there was definitely some of that. There was just too much going on at the same time." Enterprise had been the fourth new series in a span of just a decade, and people were Trekked-out. But that definitely doesn't seem to be the case today. If anything, the rebooted films have emphasized just how much better Star Trek works on television, and fans are aching for something episodic. To bide the time until more Star Trek comes along, why not go back to the beginning and check out the very first Enterprise? Trust me, you won't regret it.