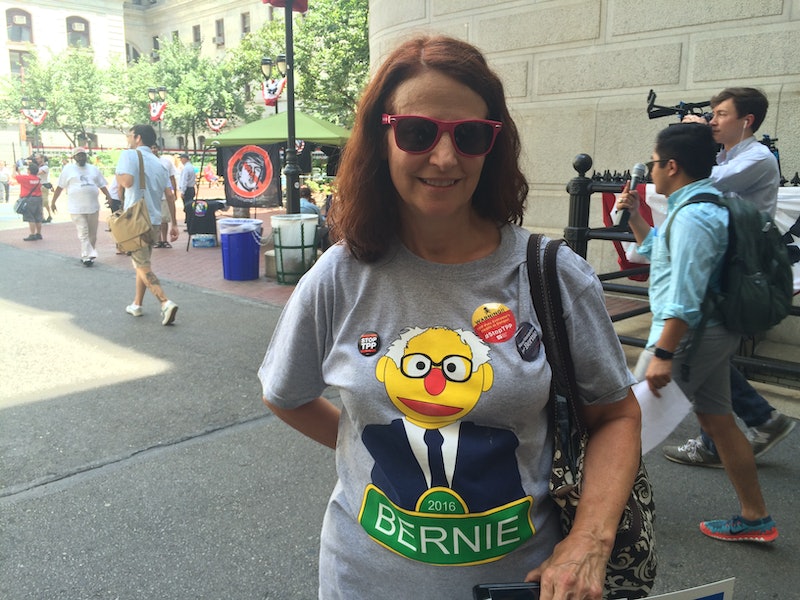 The Democratic National Convention is in full swing in Philadelphia this week, as the party officially nominated former Secretary of State Hillary Clinton for president. It's not being well-received by everyone, however — to the contrary, it's generated both heat and passion, thanks to the divisive primary race between Clinton and Vermont Sen. Bernie Sanders that ended last month. And as such, there's a lot of focus on how Sanders supporters at the convention are feeling, both about the end of Sanders' time as a Democratic candidate, and the nominee they're now being asked to support.

If you watched the convention on Monday night, odds are you sensed some of this tension — the simmering resentment that was occasionally audible in the crowd (reportedly coming from the California delegation especially), the occasional chants and boos, the incredible outpouring of sadness when Sanders finally took the stage at the end of the night.

Simply put, there's a very real emotional charge in these proceedings for countless Sanders supporters, so it's a good time to hear from some of them directly. Here's what 10 Bernie Sanders supporters tell Bustle about where they're at, and what's next.

Distaso, an Arizona delegate pledged to Sanders, says that she thought Sanders' speech to close out the first night of the DNC was "great," but she maintains she's not going to support Clinton in the general election.

As of now, Distaso says she's probably going to vote for Green Party candidate Jill Stein in the general election, and while she didn't expect a "fight" during the nomination roll call vote on Tuesday, she did believe Sanders supporters would "make some noise." She also doesn't believe the Clinton/Kaine ticket will do anything to save the planet from climate change and environmental degradation.

Ruiz traveled to the convention from New York City to protest Clinton's nomination. He believes only Sanders can actually beat Trump, and that a Trump victory would be the fault of Democrats who voted for her, not Sanders supporters unwilling to get on board.

I came here to protest because we need change. Bernie's really the only person who's gonna win, all the polls show it. Bernie's really the person who's gonna beat Trump. You know, all this talk about if we vote for Jill Stein, or we vote for a third party, or we don't vote for Hillary, how we elect Trump. Technically it's the other way around, it's the people who voted for Hillary who're going to elect Trump, because all the polls show that Bernie's the one who beats him, and Hillary's a weak candidate for the Democratic Party.

Bird, a volunteer for the Sanders campaign from Los Angeles, says she's unmoved by her candidate's endorsements of Clinton, both at the DNC breakfast on Monday (where he was met with thunderous boos) and during his headliner speech later that night. Bird tells Bustle she's not planning to vote for Clinton in the fall, and she's not sure there's anything Sanders could've said to convince her.

Probably not, because she and the party have proven to us that they don't really want us. Even though they say on the surface, "stronger together," but I do not believe that's their message. I will give them a little chance if the platform is adopted — Bernie's platform, which is supported by most of the people in the United States.

Durazo, also from Los Angeles, is at the convention to protest in favor of Sanders, and support his delegates. She says she's not convinced by Sanders' emphatic requests for his supporters to line up behind Clinton and Kaine — she's not planning to support Clinton in the general election.

I'm not surprised, we all know — I know what he's doing, he's doing what he really feels is right, or what he has to do, but I know a lot of us, we're not going to be giving in. I know he wants us to vote for Hillary, and it's sad to see that happen, or hear him say that, but you know, we're not backing down. I can't.

An alternate delegate from Bloomington, Indiana, Deppert was in attendance for Sanders' DNC speech. And although he thinks it was good and it's pushing him toward supporting Clinton, he's concerned about her relative weakness as a general election candidate.

I'm scared to death that Hillary Clinton is not well-positioned in this upcoming election to win. I think the 68 percent of people that say that she's untrustworthy have good reason to feel that way at this point, and I think the Democrat party would be better off with somebody that has more support across the country, and more trust from people.

Deppert tells Bustle that Sanders' speech "probably" pushed him toward supporting Clinton in the fall, though he's not 100 percent sure about that yet — he says he might vote for Green Party candidate Jill Stein, "based on the state of Indiana and where the polls are at." He does believe that it's important to prevent a Trump victory, however, saying "we're better off with somebody that will listen to Bernie on some level than Donald Trump, who I don't think listens to anybody at this point."

Scerbo isn't a delegate herself, but came to the convention with the New York delegation, and she wasn't inside the hall for Sanders' speech on Monday night. However, she says she liked it, and it's convinced to her to "think about" supporting Clinton, whereas before the speech she hadn't even considered it.

You know, I know where Bernie's coming from. His family, a lot of his relatives were killed in the Holocaust, by a fascist, as were my relatives killed in the Holocaust by a fascist, so it's ingrained in us. You know, fight fascism. So I can sort of see where he's coming from, but to tell you the truth, I'm not sure that Hillary understands what she needs to do to win.

Scerbo says she gives Clinton "a lot of credit" for some of the concessions that have been made. But she's very upset by Clinton's decision to offer an honorary position in her campaign to outgoing Democratic National Committee chair Debbie Wasserman Schultz, however — she tells Bustle that she thinks Clinton is "sabotaging" herself with that decision, and characterized Wasserman Schultz's actions as a "knife in my back."

It seems like time and time again, she's sabotaging her own campaign. Debbie Wasserman Schultz was caught behaving abominably, undermining Bernie Sanders' campaign when she's sworn to be neutral. She did a lot of damage to his campaign, and really I'm still trying to get that knife out of my back.

Scerbo also criticizes the Clinton campaign and the media for allegedly spreading misinformation about Sanders, including claims he'd take away people's health care, debunked allegations of chair-throwing at a Nevada Democratic convention, and the existence of "Bernie Bros," which she calls "all lies."

Campos, a resident of Texas, is a devoted Sanders supporter who traveled to Philadelphia for the convention. She says she held onto the hope that somehow, something would change to hand Sanders the nomination, but now she's confronting the reality of the situation.

I knew that I would be with like-minded people, and I wanted to still have hope that there was something that could still be pulled out of the bag ... but that was hopes, and now we have to deal with the reality, and the reality is that there's still some healing that needs to be done.

Campos says there need to be more sympathetic Clinton supporters, rather than ones who (as she says she's seen on trains and subways) insist Sanders supporters have to vote for Clinton.

Although she's not a delegate, Campos watched Sanders' speech on TV on Monday night, and she says she was moved to tears. It didn't convince her to support Clinton, however — she says "it's still too raw,"and while she does believe time could heal the wounds, she thinks she'll most likely vote for Jill Stein, since her home state of Texas is all but assured to go for Trump.

A Sanders volunteer from Chicago who canvassed for his campaign in Illinois, Wisconsin, and Indiana, Erskine says she understood in late June that Sanders wasn't going to win the nomination, but came to the convention anyways to promote and further the "political revolution" he started. She tells Bustle she found his speech "a little bit disappointing," however.

Erskine, a veteran of the U.S. Air Force, says emphatically that she will not vote for Hillary Clinton.

I'm also a veteran, so there's things that my comrades and my friends that are still wearing a uniform, that's a passion for me. So, while they can't be out here protesting and standing up for what they believe in, then I'm going to do it for them. There's reasons why a lot of us, for the last 14 years of war, are not the same persons that we were before that — we've been through some hell. And for Hillary's vote, that s**t still matters to me.

Cobb, a resident of Sanders' home state of Vermont, drove down to the convention to act as a "Bernie peacekeeper," to help keep things peaceful between protesters and anti-protesters. He tells Bustle he heard about Sanders' DNC speech, but he will not support Clinton in the general election, and there's nothing the Vermont senator could've said to change his mind.

I'm for Jill Stein. I think she is very intelligent, and very charismatic, and she has the same values as Bernie. Really, Hillary's platform is all about "vote for me because there's Trump," and there's not much more in the platform than that. She has pretty much stomped out all the progressive values that the delegation could've adopted, and, really, that's just a slap in the face to everyone. So I'm going to push as hard as I can for Jill Stein.

Cobb also plans to vote against Vermont's senior Democratic senator Patrick Leahy in November, despite having been "a lifelong Democrat," because of Leahy's decision to back Clinton in the primaries.

Smith, a volunteer for the Sanders campaign, hails from New Bedford, Massachusetts, and traveled with her husband and a couple friends to the convention to "work the outside." She says she watched a live stream of Sanders' DNC speech, and it had a strong emotional impact on her.

It made me sad, and almost cry at some points, I'll be honest with you. He's a good man, and I think that was the speech he had to give, and I understand that. There's a big machine at play, and he's trying to navigate it. I'm with him to the end.

She says Sanders' DNC speech didn't convince her to throw her support behind Clinton, however, even though she's none too pleased with the idea of a President Donald Trump — if Clinton loses, she says she'll blame the Democratic Party.

Nah, not really. I mean, I can't stand the thought of President Trump, and at the end of the day I have to think about potentially the president naming three Supreme Court nominees, that's scary to me. I'm a big supporter of Roe v. Wade, I want to see it continued, it scares the hell out of me when I think about Trump and that. But honestly, right now until November, I'm with Bernie. If the DNC is worried that they've put up a flawed candidate, that's not my fault, I'm not taking that blame. They got behind Hillary. And she's a mess.