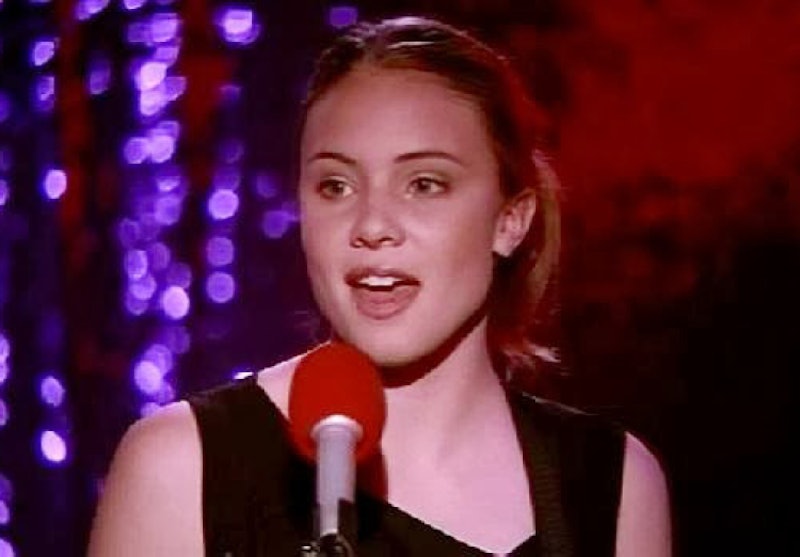 When thinking of Disney Channel Original Movies, it's easy to immediately think of the Halloweentown movies or rewatch Zenon: Girl Of The 21st Century . However, as much as I love those movies, there's another DCOM that came a little bit later in the game that deserves just as much attention. Pixel Perfect, which premiered on Disney Channel in 2004, follows the story of a teen band and a holographic pop star as their lead singer. Yep, a teen band using outside, unexpected help to try and make it in the music industry. But it's also about two best friends with secret crushes on one another, how advances technology are maybe going too far, and the effects of body image and how it's portrayed through the entertainment industry. Didn't catch all of that as a kid? That's exactly why I decided to rewatch Pixel Perfect as an adult.

Yep, Pixel Perfect is packed with life lessons, thought-provoking topics, and, of course, tons of catchy music. In fact, watching it again, I could barely handle all the deep life lessons that flooded this film. You may just need to rewatch it for yourself — but until then, here are some of the most noteworthy moments from the DCOM.

1. So... Holograms Are Seriously A Thing Now

This DCOM actually falls under the genre of science fiction when it comes to the technology these musical teens happened to get their hands on. While most of their lives seem pretty normal, the concept of Roscoe's dad have the technology for him to create a holographic cat — and eventually a holographic person — doesn't seem like that big of a deal for these friends. Yes, it's new enough so that nobody can catch on, but not so new that they're completely freaked out by it. Of course, now holographic performers are real... so maybe this movie was just set in 2016?

2. The Zettabytes Is The Coolest Band Name Ever

Is it just me or does Disney Channel always kill it with their band-naming skills? I would buy an album by a band named the Zettabytes. That's all I'm saying.

Long before Sharpay and Ryan warmed up to take the stage at East High in High School Musical, the Zettabytes held auditions for a lead singer in their band. And, well, this scene is just as hilarious as I remembered it being. Nothing says teen angst quite like screaming about how your "life is a library book."

4. Yes, That's The Girl From The Originals

If you recognize the actress that plays Samantha now, it's probably because Leah Pipes also played Camille O'Connell in Seasons 1-3 of the The CW series, The Originals.

If you watched Phil Of The Future, then odds are you thought that Ricky (or Raviv) Ullman was cute at one point or another. But this movie really enhances his early-'00s boyish charm.

6. First Dates Can Be Painful

I definitely remember Loretta's first date with Roscoe's friend being a creepy one, but upon watching the movie now, it's pretty clear that this date is a high school case of the full-grown player. With his money and his power over Roscoe, all he's into is Loretta's looks. Disney warned us young. We can't say they didn't try.

7. Samantha's Got A Seriously Strong Grip On Life

If only all teenagers understood the vital life lessons that Samantha throws down for Loretta in this film. Whether it's something as simple as doing your own homework or knowing what it feels like to fail at something, just being perfect right off the bat doesn't make you a human being. If anything, being human is all about trial and error.

Screening someone's calls on your home phone was basically the 2004 equivalent of ignoring a text message. It's hard to not laugh at the hilarious throwback moment of hearing Samantha and Loretta freak out over the fact that Roscoe screened Samantha's call.

9. The Girl Feud Is Real

Samantha and Loretta really do not hold back when it comes to making digs at one another. The bullying struggles never end.

10. So That's How The Internet Works

When Loretta uploads herself onto the 2004 Internet, things get weird. Just imagine if Loretta went through the meme-filled internet of today? Now that's something I want to see.

As I mentioned earlier, this film's overall concept definitely falls on the line of science fiction. However, these teenagers also happen to be very lucky that their little pop singer experiment didn't turn into something even crazier than it already did. Basically, they're messing with the idea of what really makes up a human being. Does Loretta actually think for herself? Does she have feelings and a soul? This is craziness.

Why couldn't she be the lead singer of the band? Yep, nothing like the pressure of Hollywood's standards to crush a girl's dreams. At least Disney had the guts to point it out.

13. The Struggle Is Way Too Real

This movie is basically just one giant metaphor for the ways in which the media sets unreasonably high standards for women. Loretta is Roscoe's dream girl because he created her. Loretta's incredibly beautiful, talented, and dependent on Roscoe... but she's not real. Meanwhile, Samantha struggles to get her best friend to notice what's right in front of him — a real person. That's some seriously deep stuff, Disney Channel.

Now, can someone could bring back DCOM's like this one please? If not, I'll just have to watch Pixel Perfect on repeat. And, honestly, I have absolutely no problem with that either.