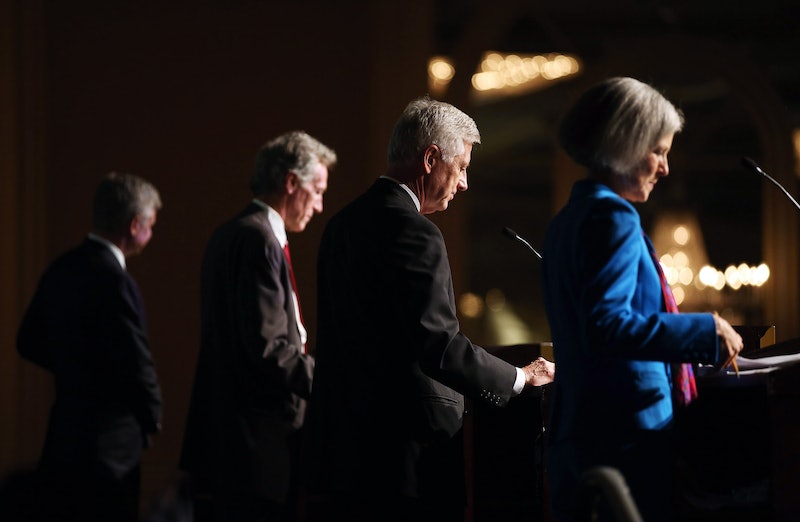 Despite what 99.9 percent of media coverage might indicate, Donald Trump and Hillary Clinton aren't the only people running for president — though, for the two major-party candidates, there's about a 99.9 percent chance that one of them will win. But that doesn't mean there's no reason to pay attention to Libertarian candidate Gary Johnson and presumptive Green Party nominee Jill Stein. With widespread antipathy toward both major-party candidates, as measured by their lack of favorability ratings, this could be a big year for either both the Libertarian and the Green Party or one in particular. Who's doing better, Johnson or Stein?

Going into August, Johnson is clearly outperforming Stein. This is evidenced by a couple different things. First, Stein isn't making it into as many polls as Johnson. Real Clear Politics offers averages for both three-way and four-way presidential match-ups, and the three-way polls feature only Johnson as a third-party contender against Clinton and Trump. Five Thirty Eight's election forecast page doesn't list Stein, but includes Johnson. And, in polls that include both Johnson and Stein, Stein is averaging 3 percent, compared to Johnson's 7.2 percent.

Then again, this could change in August. The Green Party holds its nominating convention August 4 through 7, where Stein is expected to be officially nominated. Johnson became his party's official nominee back in May. And Stein's numbers could increase after July, as supporters of Sen. Bernie Sanders come to terms with the official end of his candidacy following the Democratic National Convention.

Both third-party candidates are a far cry from getting majorities in polls, and without the massive amounts of money and media attention garnered by major-party candidates, they can't be expected to get there. But their numbers are still promising for them and their parties in other ways.

Johnson is already polling over five percent — that's the magic number needed in the general election in order to qualify for government campaign funding in the next election cycle. That would be no small win for the Libertarian Party. The only non-major-party candidate to break five percent since 1968 was Ross Perot, who garnered 18.6 percent in 1992's election. And it's possible that Stein will get there, too.

Both candidates would have to improve in the polls significantly between now and September in order to qualify for the presidential debates. The Commission on Presidential Debates requires candidates to be polling with at least 15 percent support in five different polls, which they select, in order to access the debate stage.

Johnson is currently polling better than Stein. That could change as we transition into the general election and after Stein is officially nominated. Keep your eyes on these third-party candidates to see how far they can go in a most unusual election year.