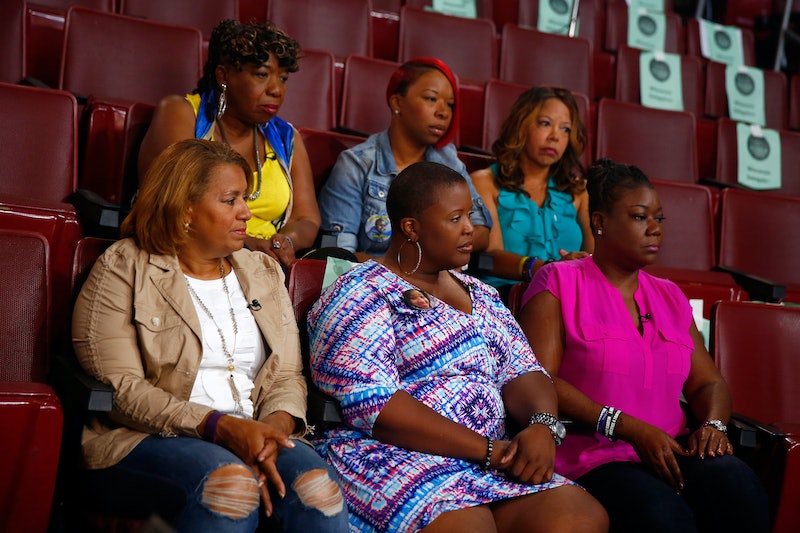 On Tuesday, Wanda Johnson, Annette Nance-Holt, Gwen Carr, Sybrina Fulton, Lucia McBath, Lesley McSpadden, Cleopatra Cowley-Pendleton, Maria Hamilton, and Geneva Reed-Veal took the stage at the Democratic National Convention in Philadelphia. These women are, respectively, the mothers of Oscar Grant, Blair Holt, Eric Garner, Trayvon Martin, Jordan Davis, Mike Brown, Hadiya Pendleton, Dontré Hamilton, and Sandra Bland, all of whom were black people killed at the hands of police and by gun violence. Before these women took the stage, the DNC showed a video of the Mothers of the Movement meeting with presumptive Democratic nominee Hillary Clinton — a video that was a passionate call for racial justice in light of recent events.

The video, which you can watch online, features a meeting that was scheduled to be a half hour long but ended up lasting for two hours because as Maria Hamilton explained, "once she got there, Hillary actually sat there and listened to each and every one of our stories. She showed respect, empathy. We've seen the loving mother part of her; it wasn't about politics." Sybrina Fulton agreed: "She listened to us. Nobody else listened to us."

Throughout her campaign — and more broadly, her entire political career — Clinton has been scrutinized for her support of mass incarceration and welfare legislation that disproportionately criminalized black people. Earlier this year, lawyer Michelle Alexander wrote for The Nation that Clinton does not deserve the black vote, pointing to her support of the 1994 crime bill as First Lady and to her reference to black youth as "super-predators." So during her current presidential bid, Clinton has been trying to build a more comprehensive racial justice platform, often influenced by her opponent, Vermont Sen. Bernie Sanders. This video — and her partnership with the Mothers of the Movement — speaks to this effort.

In the DNC video, the mothers went around the room telling the heartbreaking stories of the children that they had lost.

"It seems like people are just getting away with it."

"I can't help Trayvon at this time but there are other Trayvon Martins that I can help."

"I believe in my heart that Dontré was a seed planted so that me and these different moms can actually be our loved ones' voices, to actually give real change. ... It's been 400 years, and I just want us to love one another."

The video speaks to the increasing frustration, heartbreak, and loss that many black people have experienced as a result of systemic racism. Clinton — who these mothers support in part because of her pragmatism and "commonsense" policies — argued that the women should "continue to speak out," but that they would be "more effective" if they did "somehow band together, so that it's a constant drumbeat."

"This is not only wrong, this is unacceptable," Clinton said in the video.

The video concluded with a prayer to honor and celebrate the lives of the mothers' children. That Democrats elected to bring the Mothers of the Movement onto their largest stage is an indicator of how much the movement for black lives has influenced and shaped this election — and the way the country perceives policing and institutional racism. It certainly posed quite the contrast to last week's Republican National Convention, where "all lives matter" and "blue lives matter" became an acceptable chant on the convention floor.

These mothers, as well as all of the organizers who have put in so much work into the Black Lives Matter network, are in a position they never should have had to be in, but they are now doing the tough work of holding Clinton and the Democrats accountable. What remains to be seen now is whether Clinton, if elected, will put in the necessary effort to rebuild the communities of color that so many of the policies she once supported helped "decimate," in Alexander's words. For the moment, though, it is incredibly moving and significant that the Mothers of the Movement were given a platform to share their children's stories and have their own voices amplified.