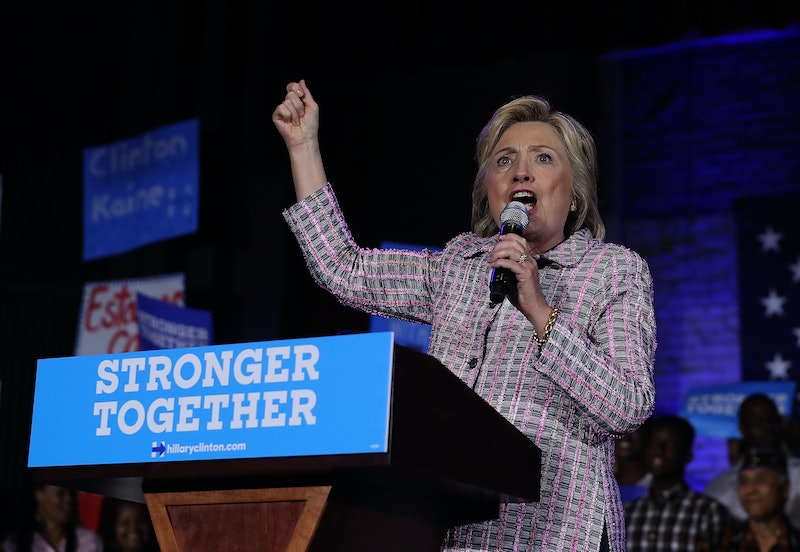 During a roll call vote on the second day of the Democratic National Convention, Hillary Clinton officially became the Democratic Party's nominee for president. This is a historic moment for the United States: Clinton is the first female nominee of a major political party. It was South Dakota that put the former Secretary of State over the top, giving her the 2,382 delegates she needed to win the nomination and then some.

After more than a year of rigorous campaigning, Vermont Sen. Bernie Sanders officially conceded to Clinton. He had promised on numerous occasions to take the fight for a political revolution all the way to the convention floor, and he stayed true to his word. But Sanders endorsed Clinton shortly before the convention, and on Tuesday evening, he joined the Vermont delegation to cast the last votes of the roll call. He received 22 of Vermont's 26 votes, and then stood up to speak, moving to help Clinton secure the nomination by a voice vote:

Madam Chair, I move that the convention suspend the procedural rules. I move that all votes, all votes cast by delegates be reflected in the official record. And I move that Hillary Clinton be selected as the nominee of the Democratic Party for president of the United States.

That South Dakota was the state to put Clinton over the top, and that the head of South Dakota's delegation was speaking in the Lakota language at the time, made the moment even more significant. It posed quite the contrast to last week's Republican National Convention, too.

Clinton's official nomination comes after significant divisions among Democrats. Many of the progressives that rallied around Sanders during the primaries are now reluctant to throw their support behind Clinton, but in a moving speech Monday night, Sanders encouraged his supporters to ensure that Donald Trump did not win in November. Clinton is slotted to speak on Thursday, the last day of the convention, when she will formally accept the Democratic Party's nomination. Going forward, Clinton is a historic candidate who will be running on the most progressive platform that her party has ever passed — largely thanks to the influence of Sanders and his supporters.

Now that Clinton and Trump have clinched their parties' respective nominations, they will battle it out between now and November against each other and against third-party candidates Gary Johnson and Jill Stein.