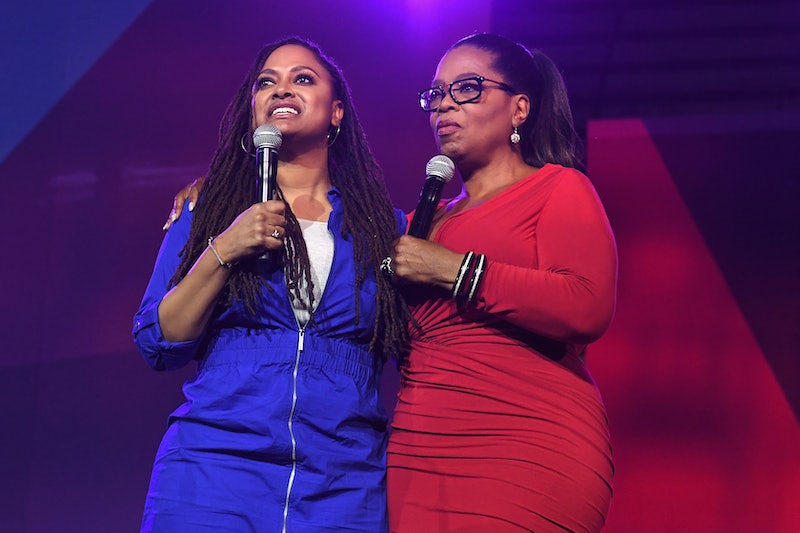 When Deadline reported that Ava Duvernay would be directing the movie adaptation of the popular children's book A Wrinkle In Time while Jennifer Lee (aka, the co-writer and director of Frozen) would be adapting the script, I thought I couldn't be more pumped for one of my favorite books to come to the big screen. But, as it turns out, my level of pump just got more... well, pumped, because Variety is reporting that Oprah Winfrey has joined A Wrinkle In Time. Ahhh! This will be, of course, Oprah's second collaboration with Duvernay — the first being in the movie Selma. This movie already had serious girl power vibes, but the presence of Oprah definitely ups the game. But, as a superfan, I gotta wonder, who will Oprah play in A Wrinkle In Time?

Turns out, a more appropriate question would be "which," because the character Oprah will be taking on is that of the ethereal woman named Mrs. Which. Now, if you've never read A Wrinkle In Time — or the rest of the books in the "Time Quartet" by Madeleine L'Engle, including A Wind in the Door, Many Waters, and A Swiftly Tilting Planet — I highly suggest you head to your closest library stat. But, for now, I'll give you a brief summary so you can really understand how cool it is that Oprah is taking on this awesome role.

The story follows Meg Murry, a math and science-loving teenager who has a big family and a big chip on her shoulder brought on by some serious social awkwardness. She, her brother Charles Wallace, and her neighbor/love interest Calvin O'Keefe are swept away through time and space by three mystical women named Mrs. Who, Mrs. Which and Mrs. Whatsit. The three W ladies help the children battle against "IT" on the creepily-conformist planet of Camazotz to rescue the Murry's government-employed physicist father, who is being held prisoner by "The Black Thing" on another planet in another dimension.

The W ladies are all fascinating characters, Mrs. Which is one of the most compelling. The character is the oldest of the three, and has a very difficult time relating to the human children — she even transports (or "tesseracts," as the book states) them to a two-dimensional planet at one point because she forgets that humans have three-dimensional bodies. All three of the women have unconventional speech patterns, but hers is characterized in the books by capitalized words, with the first consonants repeated multiple times. It will be interesting to see how Oprah is portrayed visually (Mrs. Which has trouble taking human form and is often seen as a shimmering substance), and if she will take on the odd vocal patterns from the book. If you ask me, she's certainly a magical enough person to be able to take on such an otherworldly role.

I only wish I could tesseract to the time and place when/where A Wrinkle In Time premieres. But until I figure out how to do that, or Mrs. Which comes and helps me out, I'll just be waiting anxiously with the rest of you and thrive off each new piece of information we receive.