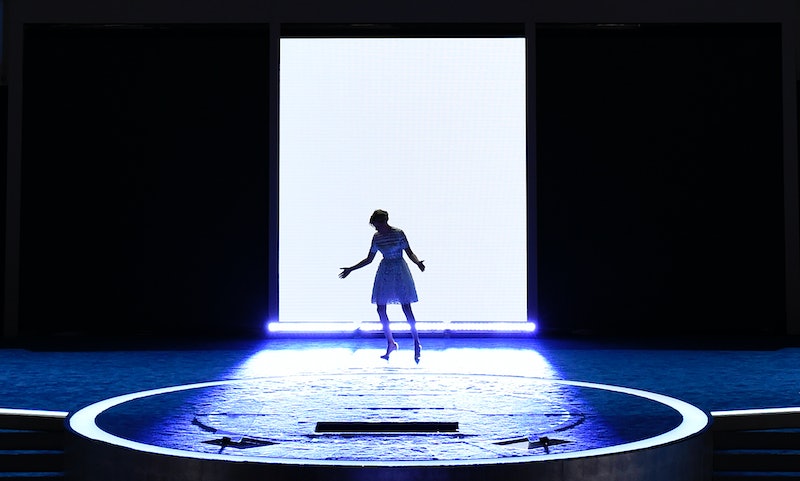 Most of what Donald Trump does is over the top, but you can count on someone to do an even more over-the-top parody of said situation. Cue Elizabeth Banks, whose DNC entrance was a brilliantly played joke of Trump's highly mocked entrance to the RNC. And there couldn't have been a more perfect actress to perform the bit, especially considering her role in a movie that has striking parallels to the current Republican nomination process.

"Some of you know me from The Hunger Games, in which I play Effie Trinket — a cruel, out-of-touch reality TV star who wears insane wigs while delivering long-winded speeches to a violent dystopia," she said. "So when I tuned into Cleveland last week, I was like, 'Hey, that's my act.'"

It was a hilarious kick-of to Tuesday's primetime convention session, which included speakers such as Lena Dunham, Cecile Richards, Bill Clinton, and the "Mothers of the Movement" who have lost their children. And while it's easy to poke fun at Trump and some of his more ridiculous moments — like that weird entrance to the RNC — even funny woman Banks knows that there's some very serious stuff that needs to be talked about, too.

Banks talked about her father, a Vietnam veteran, and her mother, who worked at a library and a local bank, and how they "worked hard, because like millions of American parents, they wanted to give their kids a good life with boundless opportunities." And, she said, it was because of what Democrats believe in — good public schools, affordable health care, and help who those who need it — that her parents were able to give their children opportunities.

The host of Tuesday's primetime spoke a few more times throughout the night, and while her serious side showed, every good host has her funny moments. From her Trump entrance to her Hunger Games reference to her joke about Hillary being the better half of the Clintons, Banks made the second day of the DNC even better than the first.