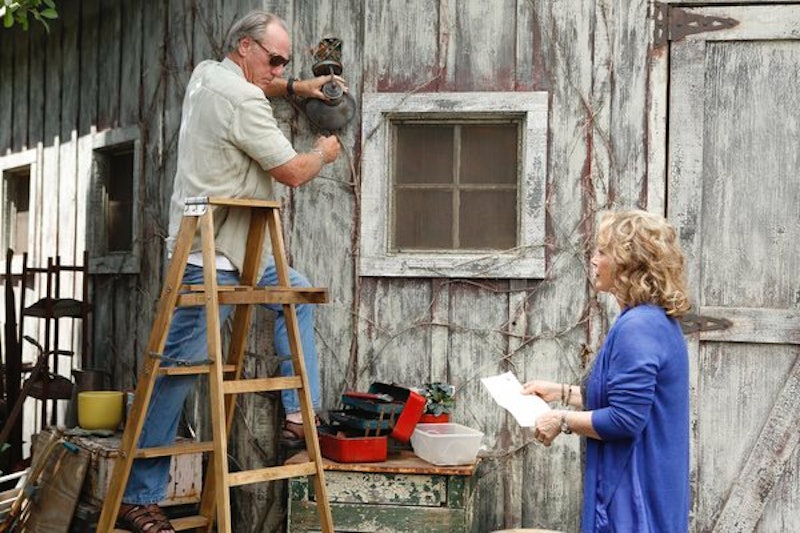 NBC's Parenthood is renowned for its large ensemble cast, who we've come to love like our own family members. But, like our own family members, Parenthood's characters are a tad predictable. We know exactly how certain characters will react to certain situations (Kristina to politics problems: Earnestly), and we know the Camille Braverman's children will constantly ignore her. Just like Parenthood itself has.

Though Camille has still been relegated to a B-story this season, we've heard more of Camille than we have during Parenthood's five-year tenure — even if Camille spent a big chunk of time off-screen in Italy. She's been chafing at the seams of her perfect familial Berkeley life for years now, but this season's actually inching towards the emancipation she's always craved: Life in a condo, going to museums and concerts and hob-nobbing with the artsy elders of the bay area. Her husband finally — finally — agreed to sell the house, because he knew that if he didn't, he'd lose her.

But what we've learned this season — while watching Camille go from suburban mom and grandmother to a woman separated from her family — is that the show isn't all that interested in Camille's side.

We did not spend one second of Camille's time in Italy in Italy — even a cheap green-screened version or an indoor shot at an art museum. We did, however, spend numerous scenes watching a lonely Zeek parade around that house and get unsolicited advice from strange old men in bars. It's been clear the whole time: This is Zeek's story, even if Camille's side could lead the charge just as well. He's being bumped from his life because his wife's finally taking agency over her life, and her children yell at her for it.

We should give Camille and the writers credit where credit's due, because her speech to son Crosby in this episode — wherein she sets the record straight on not taking any guff from people trying to malign her for her choice to branch out — was an inspired, great character moment. What's so frustrating with that, though, is the straight-up fact that for every great character moment that Camille gets, Zeek gets five... and a viagra commercial.

With the exception of Jasmine (who the show has almost never followed on her own), every single other adult has gotten their own story — except for the Braverman matriarch. She's always been the mother and the grandmother, the one who'd make speeches once or twice a season chastising her children for underestimating her or putting her in a box. And those speeches have always been great, tender, ballsy moments. But they take on a different flavor when you realize it's not just her children who are shoving Camille to the side every step of the way — the writers are doing it worse.