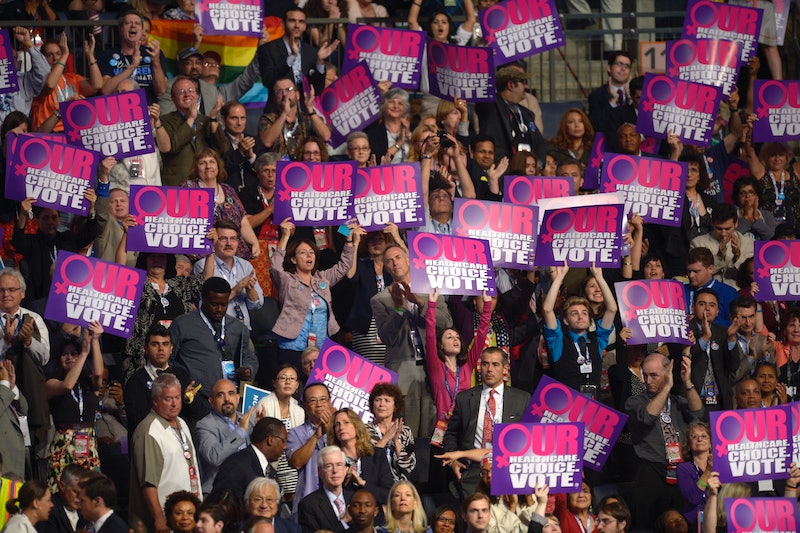 At the Democratic National Convention Tuesday night, Planned Parenthood president Cecile Richards gave an impassioned speech about affordable childcare, paid family leave, and reproductive rights. A read of Richard's speech serves as a reminder of the assault Republicans have waged against Roe v. Wade and women's access to basic healthcare, and how badly this country needs to fix it.

Planned Parenthood has been the center of political debate and discord over the last several years, with House Republicans voting to defund the clinic a record-breaking eight times (President Obama vetoed all eight attempts) in just this past year. And in an historic ruling in June, the Supreme Court struck down a Texas law which made access to abortions more difficult for women in the state. Republican presidential candidate Donald Trump, who has flip-flopped on whether he would cut off federal funding for the women's health organization, very clearly told MSNBC's Chris Matthews that he would support some form of punishment for women who underwent an abortion (and yes, he also tried to backpedal from that one).

Richards reminded the DNC about the watershed 1973 Roe v. Wade decision, which affirmed the fundamental right that every American woman has to an abortion, and the role that Planned Parenthood plays in providing basic healthcare to women who are unable to afford it. She also praised Clinton for her commitment to reproductive rights, noting that, "as first lady, Hillary declared to the world that, 'women’s rights are human rights.'”

As Secretary of State, she was a champion for women and girls around the globe.

And she will always stand up for Roe v. Wade and the right of every woman to access a full range of reproductive health care, including abortion, no matter her economic status.

Read the full text of Richards speech below, courtesy of the DNC.

Planned Parenthood was founded 100 years ago, giving women the care they need to live their lives and chase their dreams – no limits, no ceilings.

A century later, an enormous ceiling is coming down.

As first lady, Hillary declared to the world that, “women’s rights are human rights.”

She worked with Republicans and Democrats to help create the Children’s Health Insurance Program, which now covers 8 million kids.

As Secretary of State, she was a champion for women and girls around the globe.

And she will always stand up for Roe v. Wade and the right of every woman to access a full range of reproductive health care, including abortion, no matter her economic status.

Over the last year, Hillary has traveled across our country, listening to young activists working to end campus sexual assault.

To fathers who want their daughters to be paid equal to their sons.

She has made their fights her own.

And she has chosen as her running mate, Tim Kaine, a man who has been a champion for women and families his entire career.

Hillary has always been in Planned Parenthood’s corner, because she knows women deserve someone in theirs.

Women like Dayna Farris Fisher, a mom in Dallas who was diagnosed with breast cancer two years ago.

Today, Dayna is cancer-free. She says she couldn’t have done it without Vivian, the Planned Parenthood clinician who stuck with her all the way through treatment.

Make no mistake: women’s health and rights are on the line and on the ballot in this election.

Not long ago, the Supreme Court ruled that the Texas laws that forced abortion providers to close their doors are dangerous and unconstitutional.

But the fight’s not over. Donald Trump has pledged to appoint justices who will overturn Roe v. Wade and undo decades of progress.

He wants to punish women for having abortions.

And he says pregnancy is an “inconvenience” for a woman’s employer.

Well, Donald Trump, come November, women are going to be more than an inconvenience.

We’re going to be the reason you’re not elected.

When my great-grandmother was growing up, women couldn’t vote under Texas law.

Tonight, we are closer than ever to putting a woman in the White House. And I can almost hear mom saying, “well, it sure took y’all long enough.”

So what do you say?

Are you ready to make history?

More like this
What Is Barack Obama’s Net Worth? He Makes *Way* More Now As An Ex-President
By Hugh McIntyre
How To Fight For Reproductive Rights, Based On How Much Time You Have
By Courtney Young
LGBT+ Men Fleeing Afghanistan Were Denied Asylum By The Home Office, New Findings Show
By Sam Ramsden
Celebrities & President Biden Are Enraged By The Leaked Roe v. Wade Decision
By Alyssa Lapid
Get Even More From Bustle — Sign Up For The Newsletter