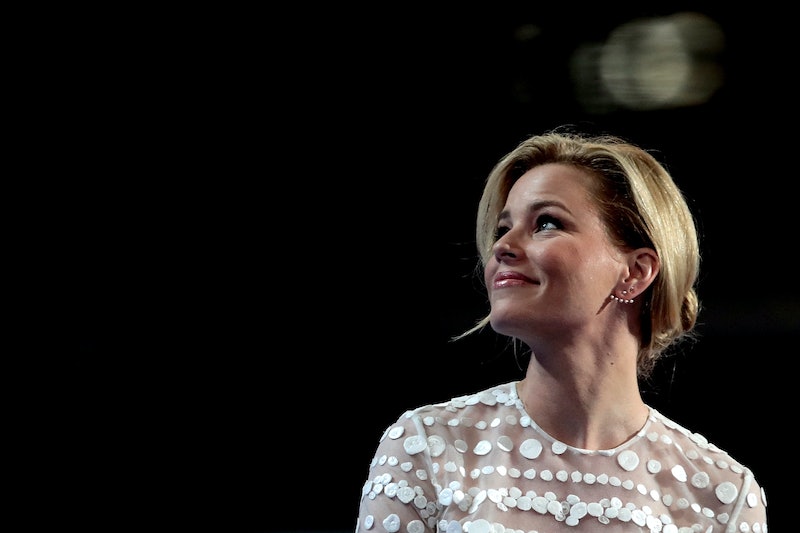 As the host of the second night of the Democratic National Convention, actress Elizabeth Banks was as funny and poised as she is in all of her major roles. But it was Elizabeth Banks' remarks at the DNC, on the night when both Bill Clinton and Meryl Streep spoke, which really showed that she's not only a brilliant actress, but a crucial political player as well.

Below are Banks' remarks, courtesy of the DNC.

When they told me that I was going to follow Schumer, I said, "I can't follow someone that hilarious, talented, and gorgeous." And they said, "You're not following Amy Schumer. You're following Chuck Schumer." And I said, "Yeah…I know."

OK, who's pumped up?! Night two! Who's excited to pound a dozen cheesesteaks with me after we finish up tonight?

You know what, let's try again.

Who is ready to elect Hillary Clinton the next President of the United States? There we go!

I'm Elizabeth Banks. Some of you know me from The Hunger Games, in which I play Effie Trinket — a cruel, out-of-touch reality TV star who wears insane wigs while delivering long-winded speeches to a violent dystopia.

So when I tuned into Cleveland last week, I was like, "Hey, that's my act."

My father, a Vietnam vet, worked the second and third shifts on the factory floor in and around my hometown of Pittsfield, Massachusetts. My mother worked at the library and the local bank. They worked hard — because like millions of American parents, they wanted to give their kids a good life with boundless opportunities.

And it is because of what Democrats built — good public schools, affordable health care, help in the hardest times — they were able to do that. And those dreams took me here to Philadelphia. Really.

Through scholarships and financial aid, I worked my way through the University of Pennsylvania, I got a world-class education — and met my wonderful husband and business partner, Max.

I'll never forget that day in 1992, when we went on a big, romantic date — a rally for Bill Clinton. There, I learned something really important about show business: the headliner should always watch out for someone stealing the show.

Hillary Clinton rocked my world. In my eyes, she was, as the saying goes, the better half. Sorry, Bill.

A smart, committed, successful woman! And not for her own benefit, but a fighter for women and children, cops and first responders, health care, and girls around the world. That's Hillary Clinton and that is what tonight is all about — the fights of her life.

Did you know that when Hillary Clinton graduated law school, she didn't just sell out and go work for some fancy law firm? She went to work advocating for children and families.

It was one of her first fights, and since then, she has never let up.

How many parents do we have in the audience?

Wooo! I'm cheering too! I'm the parent of two amazing kids. For me, Hillary Clinton's achievements are so much more than lines on a resume. As you heard, she is winning fights for kids all over the country — opening up opportunities they can't even imagine.

Far from the spotlight and over her entire career, when Hillary Clinton sees a problem, she fights to fix it.

Like our justice system that's letting down too many Americans. Hillary Clinton believes that no matter where you come from, where you live, or the color of your skin — you should have the full freedoms and protections of our laws.

This is the next fight of Hillary Clinton's life — social justice.

Wow! Give it up for Andra Day!

Are there any women in the audience tonight? Yeah, no duh, we're half the population; we're everywhere — and we matter. Hillary Clinton knows this. Women's rights are human rights — this is a point Hillary Clinton has made consistently because she feels it — like I do — in her bones. How can we not?

She's inspired me, she's inspired you, and as the next President of the United States, she'll inspire — and deliver — for millions of women and girls here and abroad.

And we need that inspiration today more than ever. Because we still don't have equal pay for equal work. We're still struggling to keep our right to choose.

And when a strong woman speaks up, and dares to have an opinion — we're still told to stop shouting, and speak softly, or we're warned that we "are not allowed to drink Mai Tais in an IKEA" and then we're expected to apologize which, in the last example, is really the only correct thing to do.

But Hillary Clinton doesn't make mistakes like that, she's never going to apologize for speaking up and fighting so women and girls can have their voices heard. And she's going to keep fighting, until the job is done.

In August of 2001, I moved to California from my home in New York City. I left the greatest — and strongest — city in the world. One month later, on September 11th, we all saw that city attacked. And when New York was attacked, New York's Senator rushed to her side.

Hillary Clinton fought for her city, her state. Relentlessly. She fought for funds so New York could recover — and so victims could have what they need to rebuild. She fought for health care and benefits, for everyone who worked at Ground Zero.

No New Yorker will forget where they were that day. It's my pleasure to introduce a good friend and a great New Yorker, Debra Messing.

When I first started my acting career, I was the typical waitress. And I am not talking about when I played "Waitress" on "All My Children."

I ate a lot of bagels for brunch because I couldn't afford both breakfast and lunch. Also, I didn't have health insurance. My doctor was at Planned Parenthood where they let me pay on a sliding scale, and where they understood my lady parts.

But if I got a major illness, I was out of luck. I know millions of people have a similar story.

Do you see a pattern? Let's hear more.

I directed Pitch Perfect 2, in which the Barden Bellas went to the world a cappella championships, so I know a thing or two about world affairs. But I still have a long way to go to catch Hillary Clinton. As our Secretary of State, our nation's chief diplomat, she traveled to 112 countries — and flew nearly a million miles.

She took the job because we needed someone to fight to make America and the world safe, someone tough and smart to sit on the other side of the table — from Russia, from China, from Canada. OK, maybe not Canada.

Hillary Clinton used her office to bring new focus and attention to sex trafficking, human rights abuses, and the plight of women and girls. Hillary didn't yell. She didn't insult anyone. She went into the room, with a clear and steady vision for the future. And she got results.

Public interest lawyer. First Lady. Senator. Secretary of State. Hillary Clinton has been fighting to help others for 40 years. Why does she do it? What keeps Hillary going and going after all these years?

She knows that America is stronger when we are together, when we give each other a hand, and when we lift each other up. She knows that when we move as one, we can cross any boundary, overcome any obstacle, and break any glass ceiling!

This simple, but powerful idea stated by our founders in this city so many years ago — out of many, we are one. It's the idea that guides every team, every group of musicians — and that guided us as we made Pitch Perfect. Through the laughs and the jokes, we wanted to show that in a cappella and in life there can be something beautiful — there can be harmony when an amazing group of different people come together.

Stronger Together. My friends and I, we believe in this idea. We believe in Hillary Clinton. So we made something for her — and for you.

Banks' speech was the perfect way to start the star-studded night, and just goes to show that you can totally tie politics into The Hunger Games and Pitch Perfect, as I've been trying to tell my friends for years now.