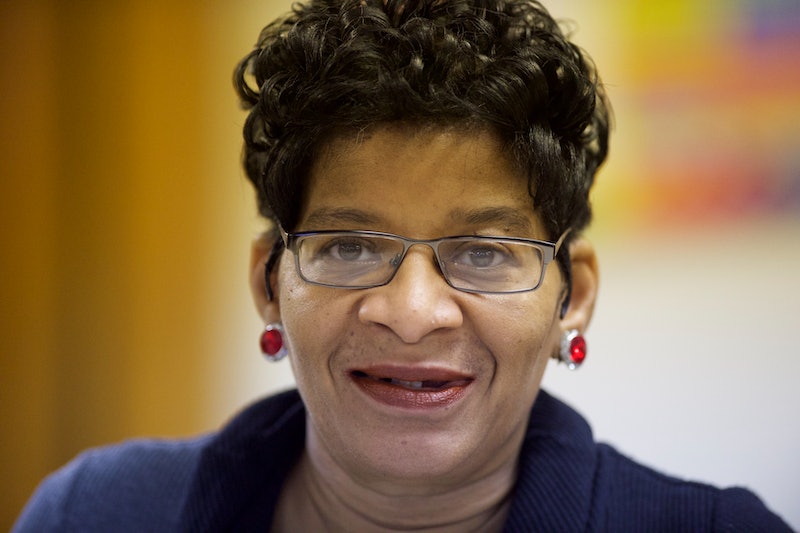 On the second night of the Democratic National Convention, a group of eight black women took the stage. These women are known as the "Mothers of the Movement," and many of them have lost their children at the hands of law enforcement. Among them was Geneva Reed-Veal, the mother of Sandra Bland, a 28-year-old woman who was pulled over for a traffic violation last summer, arrested, and then found dead in her jail cell three days later of an alleged suicide.

Among the "Mothers of the Movement," Reed-Veal is one of the most outspoken, and has advocated in her daughter's name since Bland died a year ago. At Bland's memorial service, Reed-Veal told the crowd that "once I put my baby in the ground, I'm ready... this means war." This April, she gave an emotional speech to the newly-formed Congressional Caucus on Black Women and Girls, in which she told the crowd that Bland was one of seven other women who died in jail in July 2015. She also told the crowd that she won't believe her daughter's death was a suicide until it can be scientifically proven.

During her speech at the DNC, Reed-Veal endorsed Hillary Clinton for president, and said that Clinton knows that the loss of these mothers' children is a "national loss."

Reed-Veal was the first of the eight mothers to speak during their joint address at the DNC, and her speech was a moving introduction to the tragic circumstances that brought them all onto one stage together. She told the crowd that it had been exactly one year since she buried Bland, mentioned by name the six other women who were found dead in jail cells in July of last year, and went on to endorse Clinton in sweeping, emotional language:

What a blessing to be here tonight, so that Sandy can still speak through her mama. And what a blessing it is for all of us that we have the opportunity, if we seize it, to cast our votes for a president who will help lead us down the path toward restoration and change.

Bland was a tireless advocate for social justice, and was excited to play her part in making the world a better place at her new job at Prairie View A&M, when she was pulled over in that fateful traffic stop last July. Though Bland is gone, Reed-Veal has kept up the fight not just to memorialize her daughter, but also to help ensure that no other mother has to endure what she and her comrades went through.