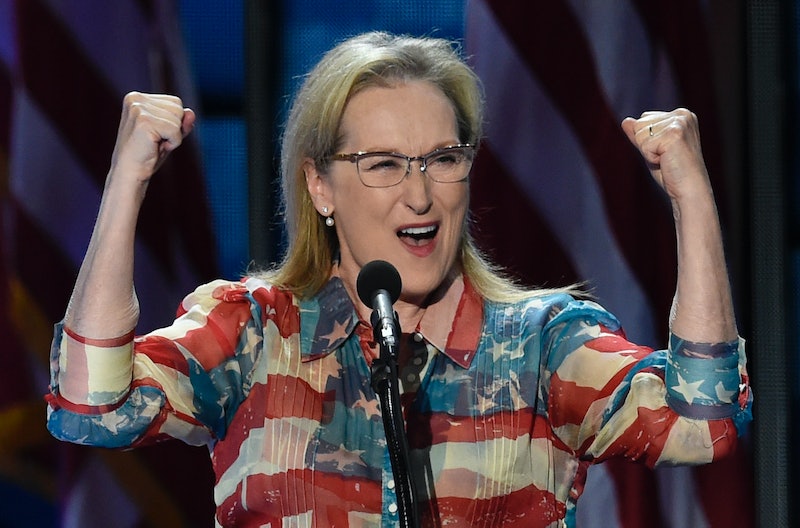 It's hard to pick the best speaker from the second night of the Democratic National Convention, but if I did, I'd have to go with Meryl Streep. She's just so poised, so awesome, so funny and so MERYL. And of course, this isn't her first time making political headlines. It only takes watching Streep's Donald Trump impression to know that she is a serious(ly funny) political force.

In June, Streep appeared with her Mamma Mia! co-star Christine Baranski in New York's Central Park for the city's annual Shakespeare in the Park Public Theater Gala, an event dedicated to the life and work of William Shakespeare. Baranski dressed up as now-presidential-nominee Hillary Clinton, and the two sung an "updated version" of the song "Brush Up On Your Shakespeare" from Cole Porter's Tony-Award-winning musical Kiss Me, Kate. Streep's costume became something of a viral sensation. She donned an orange spray tan on her face (and nowhere else), a pillow beer gut, and a very bad toupee. Though the full lyrics aren't available, the song's context says it all: two "clueless mobsters" discuss ways to woo female suitors, which is hilarious, given that the "clueless mobsters" were updated to be the Republican and Democratic nominees.

During their performance, Streep mostly sung lines from the original play, but put a spin on one line as she played Trump asking Clinton for advice: “We could do a deal... you’ll let me know, why it is all the women say no?” The line referenced Trump's infamous lack of popularity with female voters. His long strand of remarks, which span over a decade, have been accused of being both sexist and discriminatory.

Though Streep's performance that night poked fun at Clinton as well as at Trump, the actress has been a fan of the candidate for years. In March 2012, she introduced Clinton at Women in the World Summit, an annual gathering of influential female politicians, entrepreneurs, activists, and artists, among others. Her tribute to the former secretary of state was heartfelt and genuine, resembling her latest DNC speech about the candidate, which displayed some major enthusiasm.

Though Streep's performance took place over a month ago, it's not entirely irrelevant to the current state of politics. All in all, Trump could take Streep's cross-dressed-as-him advice: Maybe if, instead of spewing vitriol against minorities and his opponent, he discussed more worldly topics (like, say, Shakespeare), then he might poll a little bit better with them. But that's about as likely to happen as it is for him and Clinton to ever appear in the same room again.