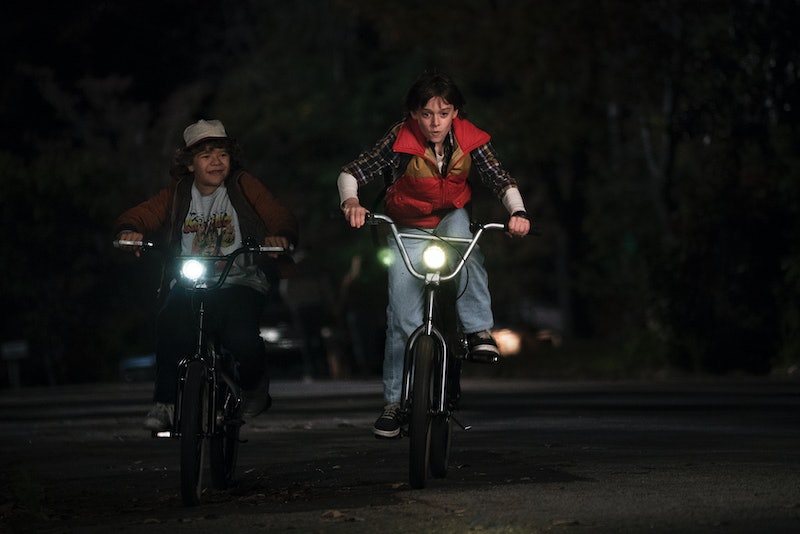 Netflix's Stranger Things is both totally awesome and a sweet reminder of a bygone era. The series takes place in 1983, a year which seems like a more simpler, innocent time — well, except for the crazy weird happenings in Hawkins, Indiana, according to the sci-fi drama series. Stranger Things draws influence from so many TV shows and movies, like Stand By Me, Close Encounters of the Third Kind, and ET, that it's like a love letter to the good ol' '80s sci-fi flick. And that's exactly why show creators Matt and Ross Duffer decided to set Stranger Things in the 1980s, according to their interview with the A.V. Club.

"It worked narratively, and then it also allowed to pay homage to so many of these films that are the reason we’re doing what we’re doing. And go back to a certain style of storytelling," Matt told the publication, adding that Stephen King's Stand By Me was one of the brothers' favorite movies while growing up and was a big influence on the show. "A lot of the filmmakers that we grew up loving and whose work inspired us—George Lucas, [Steven] Spielberg, Stephen King—they’re very much inspired by what came before them. For them, it was Flash Gordon and The Hidden Fortress and John Carter. For us, it’s their films."

Check out what other old and current TV shows and movies have inspired Stranger Things.

This one is very obvious. Spielberg's opus about a young boy's best-friendship with a mysterious extraterrestrial has a lot of influence on Stranger Things — I mean, Eleven isn't an alien, but she is a person with mysterious origins and the rest of the boys approach her as such. E.T. inspired the show so much that the Duffer brothers told the A.V. Club that they weren't sure about including a scene in which government agents chase the Stranger Things kids on bikes, which, of course, happens in E.T.

"You can’t get away from the comparisons to E.T. when you do that," Matt said. "But on the other hand, we were like, 'How can we not do a bike chase?' We actually gave into our weaker impulses, and just wrote it."

This short-lived drama series by Judd Apatow came out in 1999 and was set in 1980, so it's a lot more like Stranger Things than you might expect. Personally, I thought of the series while watching Stranger Things' teen scenes with Nancy, Barb, and Steve. And the Duffer brothers told A.V. Club that was intentional.

"I thought, 'OK, television now is becoming more cinematic. Can you do a show where you care about the characters just as much as Freaks And Geeks or Friday Night Lights, but can there also please be a monster in it?'" Matt said. "So that was a goal with it. I just hadn’t seen enough of that on TV."

Sure, FNL centers around football, but these two series have a lot in common: Small town, teens up to no good but also trying to fix things (ahem, Landry and Tyra), and like Matt Duffer said above, plenty of characters you care about.

4. Stephen King's It And Stand By Me

The Duffer brothers told A.V. Club that the author's works — specifically these two books — were on their mind as they developed the show. According to an interview in Variety, the main thing they idea they loved about Stand by Me, for instance, was that the group of kids actually faced real danger.

"When you’re looking back at Stand by Me, the stakes feel very real," Matt Duffer said. "The kids never feel completely safe, even though there is an element of fun and you love those boys. There’s this consistent danger with Kiefer Sutherland coming after them, the train coming so close to them — we wanted to always keep the kids in real danger, that’s not Dungeons & Dragons danger."

5. Close Encounters Of The Third Kind

Winona Ryder's Joyce draws a lot of inspiration from this other Spielberg movie. In Stranger Things, Joyce communicates with Will using a string of Christmas lights as well as a wall Ouija board and the town accuses her of going insane. It's reminiscent of Roy in Close Encounters, as is the general way Stranger Things deals with the mighty unknown.

A group of young kids on a quest was done to perfection in The Goonies, and that influence is clear in Stranger Things as Dustin, Mike, and Lucas set off to find their missing friend Will.

In several interviews, the Duffer brothers cite the iconic director of '80s movies like They Live and Halloween as a direct influence on Stranger Things. "Obviously the influences are all over the show, whether it’s Spielberg’s stuff or John Carpenter or the novels of Stephen King," Ross Duffer told IGN. "And I think for us looking at it, it’s like, 'What is it about these stories that resonated so much with us when we were growing up?'"

When the Duffer brothers were developing Stranger Things, they told A.V. Club that they initially wanted to set the show in Montauk, Long Island, as a salute to Jaws. "We were excited about the idea of doing something coastal," Ross said. "Probably our favorite movie of all time is Jaws, and Montauk is one of the bases for Amity, so I think that’s where that idea came from. Logistically, it became more necessary for production reasons to set this not in a coastal town."

Eleven is a young, scarred girl with telekenesis, much like the titular heroine of Stephen King's worst-prom-ever story Carrie.

I know, Stranger Things isn't a space opera like the George Lucas saga, but in 1983, Star Wars was just getting started, and the kids in the show would naturally be into it. And that's what inspired the Millennium Falcon scene with Eleven, said episode director Shawn Levy in an interview with ComingSoon.net. "The Falcon is so what every kid had in 1983, but it’s a boredom activity for Eleven and I didn’t want to make more of it than it would be for that character," he said.

This 2015 hit film's marketing influenced Eleven's shaven head look and helped convince Brown to go through shaving her head for the role, Matt Duffer told Variety. "We showed Millie a picture of Charlize [Theron] as Furiosa and said, 'Does she not look badass?' She was like, 'Yeah.' We said, 'You’re gonna look badass, exactly like Charlize.' She’s like, 'OK, let’s do it.' Thank God for Mad Max."

Another group-of-kids-on-a-quest movie that Stranger Things has experienced comparison to is this 2011 flick directed by J.J. Abrams and Levy told ComingSoon that it's a compliment to both projects. "So I feel like cosmetically, there will be those links to Super 8, but in the same way that Super 8 was both an alien movie and a coming-of-age middle school movie," he said. "I feel like “Stranger Things” is so much more than the trappings of ’80s nostalgia which is only a small part of what makes the show great."

So it's clear that Stranger Things itself isn't too strange at all — it's made up of so many beloved TV shows and movies.

More like this
17 Photos Of The 'Wednesday' Cast Vs. The 1991 'Addams Family' Cast
By Grace Wehniainen
The First Trailer For 'That '90s Show' Includes So Many Nods To The Original Series
By Jack Irvin, Alyssa Lapid and Grace Wehniainen
The 'Firefly Lane' Book Ending Teases Way More Tears To Come In 2023
By K.W. Colyard
Everything To Know About 'Firefly Lane' Season 2 Part 2
By Gretchen Smail
Get Even More From Bustle — Sign Up For The Newsletter