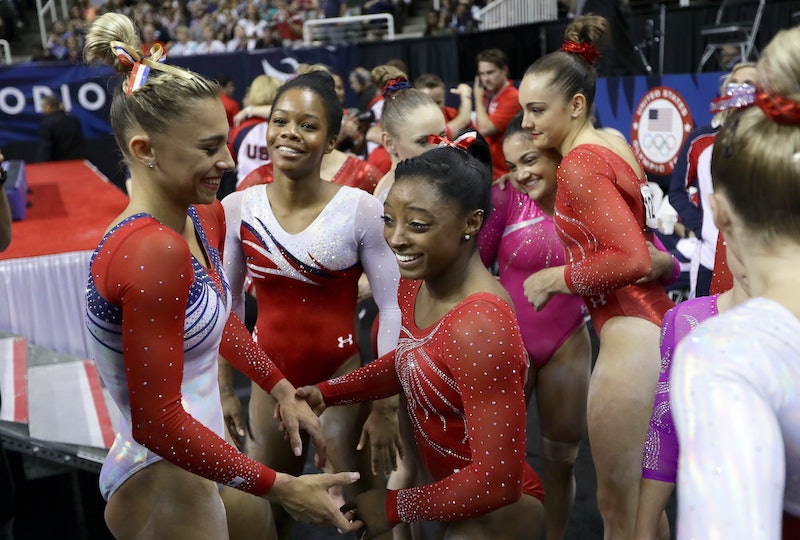 There's no shortage of amazing events to watch between Aug. 5 and Aug. 21, but gymnastics at the 2016 Rio Olympics is arguably one of the most highly-anticipated competitions. After America's amazing success at the 2012 London Olympics, it was hard to imagine that we'd have an even more amazing team this time around. In fact, during the Olympic trials, 2008 gold medalist Nastia Liukin observed that Simone Biles is "the best gymnast who ever lived" and this is arguably the strongest team we've ever sent to the Olympics. If you're a fellow gymnastics enthusiast who won't be able to watch competition right as it airs, you're probably wondering if NBC will replay women's gymnastics?

The first showings of key gymnastics events won't air during primetime — because there's only a one hour time difference between Rio de Janeiro and U.S. ET, these will be the "most live" Olympic Games in a while. Gymnastics will be on TV all day Sunday, Aug. 7, but things will get tricky for viewers as we head into the work week. For example, the team finals and all-around finals will air at 3 p.m. ET on Aug. 9 and Aug. 11, while the apparatus finals will air at 1 p.m. ET on Aug. 14 and Aug. 16. But, don't despair — although the full primetime schedule is not yet available, gymnastics will replay the exact same events during the primetime slot each evening, which begins at 8 p.m. ET. Just remember to avoid social media throughout the day, because spoilers will definitely abound.

But, if you're unavailable on the days of the competitions, there are still ways to watch. Luckily, DVR and On Demand will have you covered to either watch the competition for the first time or, in my case, re-watch repeatedly because I'll never tire of Aly Raisman and Laurie Hernandez's killer floor routines, Gabby Douglas and Madison Kocian's jaw-dropping uneven bars tricks, and literally every single move Simone Biles makes.

It's also worth noting that NBC always posts highlight clips on their website — and I'm sure plenty of this year's highlights will be courtesy of the women's gymnastics team. Plus, NBC's new mobile sports app will livestream events and offer an "On Demand" option. So, if you happen to be out of town and don't want to wait for your DVR recordings, the app will allow you to watch events the moment you have some downtime. However, you'll want to install the app and make sure it's set up in advance — it's only available to NBC subscribers, so I'd recommend entering your login information prior to the Olympics. We've all forgotten our passwords at some point (right?) and there's nothing more frustrating than not being able to access the Olympics STAT.

NBC will air gymnastics live and replay the competitions during primetime —and their app will allow us to watch even if we're not close to a TV during either time slot. So, there are plenty of ways we can cheer on the amazing young women who will represent the U.S. at this year's Olympics.

More like this
Are Tom Daley & Louis Theroux Bound For 'Strictly'?
By El Hunt
What Is Jeanie Buss' Net Worth? The Lakers President Is Uber Rich
By Hugh McIntyre
Marcus Rashford Took Inspo From Kravis For His Adorable Proposal To Girlfriend Lucia Loi
By Frances Stewart
Ryan Reynolds Brought Some Famous Friends To Wrexham A.F.C's Last Game Of The Season
By El Hunt
Get Even More From Bustle — Sign Up For The Newsletter