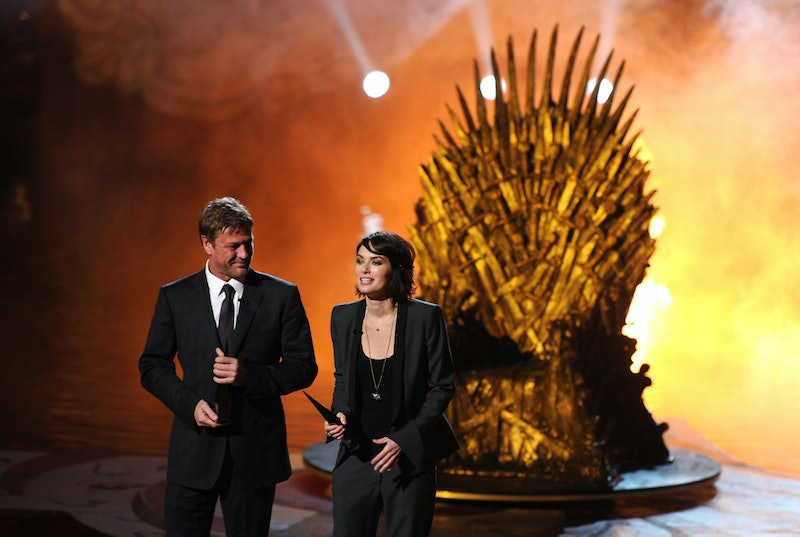 In the Game of Thrones world — spoiler alert! — Cersei Lannister now holds the Iron Throne. The calculating, evil, overall fierce mother and leader now controls the Seven Kingdoms... for the moment anyway. But here on the other side of the Sunset Sea, far from the Red Keep, we are still choosing who will be our leader for the next for years. So imagine the world's surprise when Lena Headey, who plays Cersei on the small screen, put in her two cents. Yep, that's right: Cersei Lannister endorsed someone for president, and it wasn't Hillary Clinton.

That's not to say she's for Trump by any means, but Headey seems to have been taken by Michelle Obama's speech Monday night. The morning after, she jumped on Twitter to respond to a tweet from Irish actress Victoria Smurfit, who asked, "Can we cut straight to @FLOTUS as president?" FLOTUS is, of course, Michelle's Twitter handle. Heady quoted the tweet with a response: "Yes can we. Makes beautiful sense.”

Michelle Obama's speech was of course lauded by viewers and the media as the highlight of Monday night. In it, she spoke to why Hillary Clinton is the best choice come November. She recognized Hillary's work to protect children in the country, including her role in passing the the law that created the Children's Health Insurance Program. But Obama really hit it home when she made it personal: "When I think about the kind of president that I want for my girls and all our children, that's what I want."

Heady's take on Clinton is anyone's guess. But Cersei and Clinton have been compared by more than one pundit. John Kass wrote for the Chicago Tribune that Hillary had her own Cersei moment back in January, when a young voter asked her at an Iowa rally why the same amount of enthusiasm wasn't as palpable for her as it was for Bernie Sanders. Kass more or less argues that Clinton's response was Cersei-esque.

Then there are the articles opining about which Game of Thrones character Clinton would be. Like Daenerys Targaryen, for her sense of entitlement to the throne — er, um, presidency. If not Dany, then maybe Catelyn Stark, thanks to her elder statesman abilities and vast experience with intra-realm politics. Cersei is by far the harshest female character on the show. Perhaps not the one that Clinton would want an alliance with — unless, of course, they could win.

Even if Cersei — or do I mean Headey? — does not clarify her support for Clinton this go around, that's probably fine. The winner of the coming battle for Westeros is such a mystery that it might be good to wait until next season before setting anything in stone.