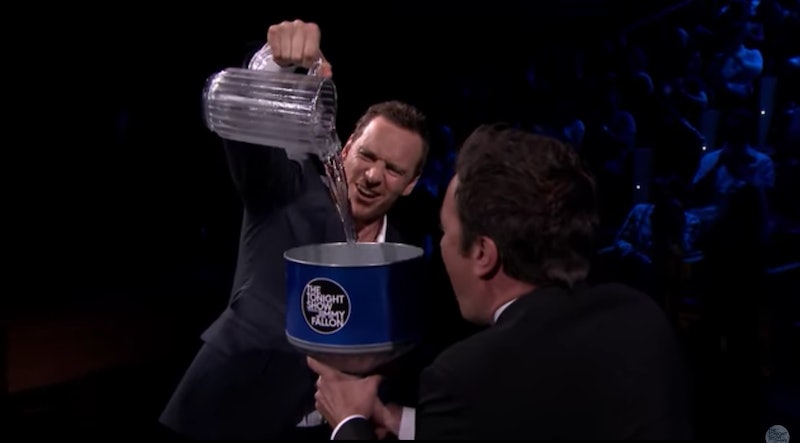 Unlike his more wholesome roles of late, Fassbender played a superficially respectable, inwardly-tortured sex addict, Brandon in the 2011 film Shame. Clearly, Fassbender himself is nothing like this role in real life: unlike Brandon, who goes from one meaningless sexual encounter to the next to satisfy his addiction, he's been happily coupled up with Swedish actress Alicia Vikander for many a moon. But, when he appeared on The Tonight Show Starring Jimmy Fallon, Fassbender played Frozen Blackjack and reminded us why we've missed him indulging his inner sadist.

The game is a twist on the classic card game Blackjack. Whoever gets closest to the number 21 wins — the only diff is, in the Jimmy Fallon version, the loser gets a gallon of frozen water siphoned down a funnel into their nether regions. Like Brandon, Fassbender seemed to have all the luck: for the first two plays, he won easily and it was only thanks to his "being such a good sport" in the last round and opting for a risky third card that he lost. The funny thing is, his treatment of Jimmy Fallon was pure Brandon.

During the first round, much like Brandon, Fassbender's face remains totally unreadable. "Do you want me to hit you?" asks Fallon, meaning, I assume, not that Fallon's offering to actually commit an act of violence against one of the most skilled actors of our time, but that he's offering to draw Fassbender another card from the pack. "Hit it," says Fassbender cool as a cucumber, without the slightest hint of a facial expression. Never play cards with an actor, huh? Eventually, inevitably, Fassbender wins the round. And here's where things get a little Brandon-esque.

If you've seen Shame, you'll know that the thing that really makes Brandon feel alive is to commit small acts of cruelty. You know, your garden-variety, minor-league sadist type stuff. Hitting on engaged women, hitting on taken women, hitting on the woman his colleague is lusting after. And we see these mild cruelty here in a totally different form with that most good-natured of humans, Fassbender.

Most contestants on this show, when they win, they really go for it. They really just dump that jug of ice water down the funnel. But Fassbender/Brandon luxuriates in the moment. He holds that jug just a little aloft, so that the torture of the ice water is drawn out. And he doesn't dump it in. He pours a little at a time, gives in a few seconds between each pour so Fallon can recover enough so that it's truly, horribly icy again. Seriously, it's amazing.

If you enjoy watching someone as obviously lovely as Fassbender unleash his dark side in the interests of extremely watchable television, you could do a lot worse than spending six minutes on this clip. In a world where celebrities are encouraged to be wholesome and PR-friendly at all times, it's fun to watch Fassbender get a little Fifty Shades of Grey on live television.