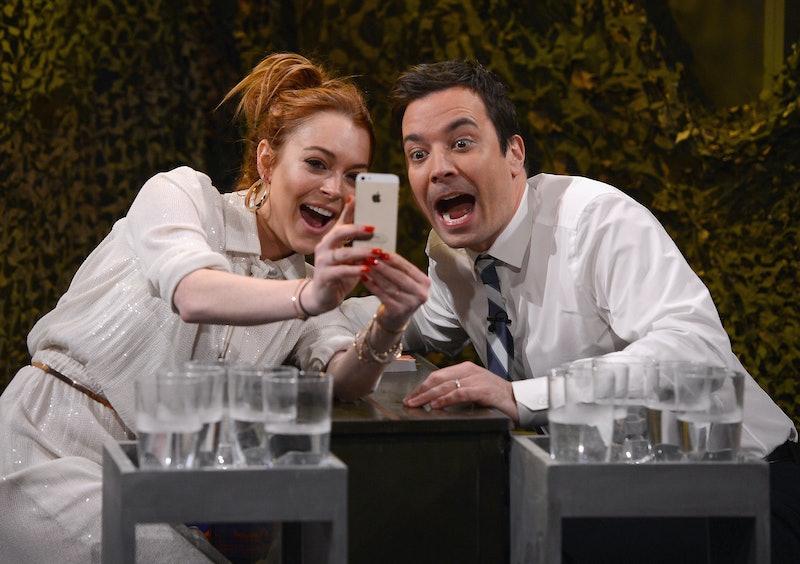 Lindsay Lohan might have thrown water all over Jimmy Fallon during her Tonight Show appearance on Thursday — it was part of a game, don't worry — but the best part of her interview came earlier in the night. Lindsay Lohan mentioned a Mean Girls reunion and it sounds like there's a very good possibilty of it actually happening! Mean Girls reunion! Woohoo! It might even go down on The Tonight Show.

This year marks Mean Girls' tenth anniversary, so if there was going to be a reunion, now would be the time. The exact release date was April 30, 2004 giving everyone about a month and a half to pull this together. If they want to be exact, that is. I'm sure many of us fans are open to a reunion no matter when it happens. It could be October 3rd! It could be Christmas themed and everyone could do the Jingle Bell Rock dance for all I care. (Actually, that might be a great idea.) This year is also the perfect time for the reunion because Lohan has her shit together. The ten years between Mean Girls' release and the present have been rough for Lohan, so having her healthy and out of trouble in time for the reunion leaves little doubt that she would actually participate.

Lohan just bringing up that she is interested in a reunion wouldn't be enough. We need cold hard facts. We need Tina Fey and Lohan delivered. In fact, the reunion was Fey's idea. Lohan told Fallon, “When I was backstage I saw Tina and she mentioned maybe doing some type of reunion.” Fallon went into serious talk show host mode for a second and asked Lohan if she would do it. She agreed and you can see him thinking, "Yes! I got Lindsay Lohan to confirm her interest in a Mean Girls reunion on my show!" Lohan continued, "She said she was talking to Lorne [Michaels] about it, so she’s talking to the big boss." Fallon then offers to let the reunion happen on his show and Lohan is totally on board. So am I! It would be a Tina Fey and Jimmy Fallon "Weekend Update" reunion and a Mean Girls reunion. Fallon hosts The Tonight Show now, not its silly little sister (no offense, Seth Meyers), so it could logistically work as the setting.

Just imagine everyone back together! Lindsay Lohan who made it through ten years of legal issues and rehab visits back to doing well and looking like her usual self. Rachel McAdams who has been in like a gazillion movies since 2004. Amanda Seyfried who was in an Academy Award nominated film. No one saw that coming from the girl with the ESPN boobs! And Gretchen Wieners... I mean, Lacey Chabert, who knows what she's been up to? We wanna know and it sounds like we'll get to find out!