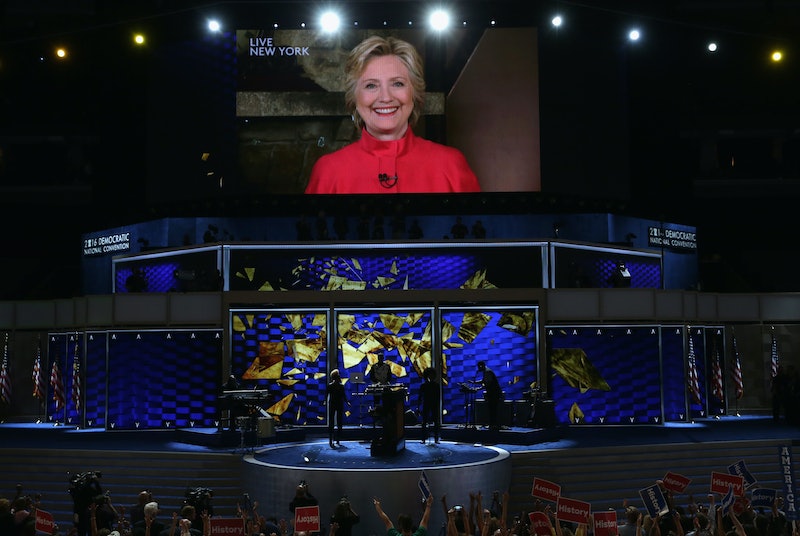 It looks like some major publications are announcing Hillary Clinton's victory as the first woman presidential nominee by congratulating... Bill Clinton. What? Both The Washington Post and The Chicago Tribune made the incredibly strange choice to place Bill Clinton on the front cover of their morning paper, all the while announcing Hillary's historic nomination. Was this just an awkward faux pas or does it point to something deeper?

To cut to the chase, the choice to put a man on the cover of your paper while celebrating the first nomination of a female presidential candidate does say something significant. Of course, as with anything, the story will only go as deep as you care to look. The decision can be chalked up to the practical — which images were available? Which photo told the most dramatic story? Hillary herself wasn't present at Tuesday night's Democratic National Convention, and photographers were only able to snap a photo of her face as she called in via satellite. Perhaps her husband Bill, standing firmly at the podium, was merely a stronger image?

But let's be real. It's difficult to attribute this choice to mere visual dynamics when we've seen women get sidelined again and again in politics. Likely there was no malevolent intent in using Bill for the cover, but the message remains the same — even on the biggest night in history for women in U.S. politics, a woman is still given less space than a man. The fact that that woman is the potential next leader of the free world only makes that worse.

The cultural implications, rooted in sexism, are clear. Plus, according to a 2014 Women's Media Center report, women only accounted for 36.3 percent of newsroom staff members. That number has largely gone unchanged since 1999, when it was 36.9.

For what it's worth, some publications got it right. The covers for The New York Times and The Sydney Morning Herald told a different story — one displayed a crowd of women cheering at the DNC and the other boasted a picture of Clinton herself.

Yet this problem with women — whether in politics or the newsrooms of major publications — is abundant. Hillary may have put another crack in the glass ceiling Tuesday night, but we certainly have a long way to go until it is shattered completely.