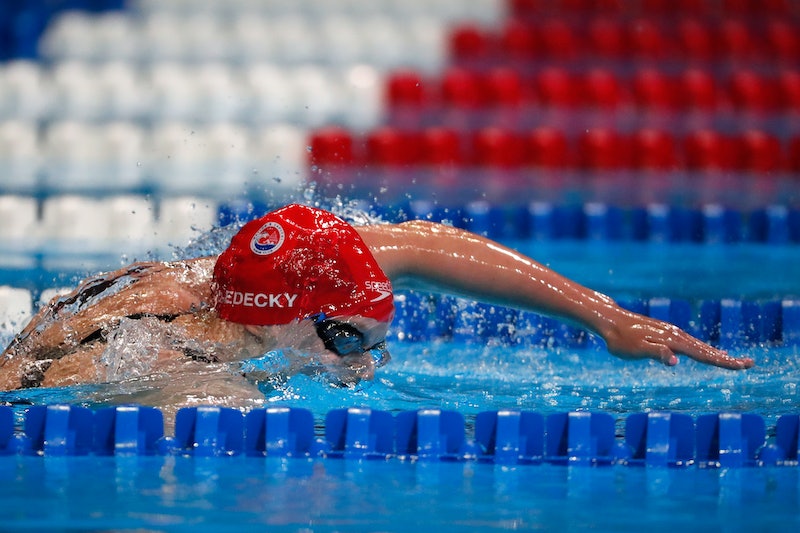 In today’s world of streaming and TiVo and DVRs and every app under the sun, I've become accustomed to the fact that I don’t have to watch television live and in real time to see my favorite shows. But, the idea of a live event throws my digital existence off. For instance, how do I watch my favorite Olympic events without a television? Or how do I watch later, if I have to work or feed my cat or something when it’s happening? In today’s convenient media age, it’s going to be important for NBC and its channels to show the most popular sporting events more than once — will NBC replay swimming events during the Rio Olympic games?

According to the schedule, there’s a swimming event nearly every single day during the 2016 Rio Olympics, so if you love to watch Michael Phelps and Katie Ledecky move like fish, you’re in luck. Rio is one hour ahead of the East Coast, so NBC will be broadcasting the 2016 Rio Olympics around the clock on NBC, Telemundo, Bravo, CNBC, Golf Channel, MSNBC, NBCSN, NBC Universo, and USA Network. Swimming will mostly be seen on NBC, as it’s one of the big-ticket events at the Olympics, but synchronized and open-water swimming can be watched on NBCSN and USA. The schedule hasn’t been announced for rewatching just yet — it will probably depend on popularity — but know that you can stream events using NBCOlympics.com and the NBC Sports app. With these, you can catch up on Olympic swimming anywhere, anytime, making it more convenient than being chained to your cable box.

Speaking of swimming, here are a few important things to know about one of the most popular Olympic events.

Michael Phelps Is Back

Winning eight gold medals in one Olympic games (2008 in Beijing) would be enough for me, but Michael Phelps is apparently bored with retirement and back in the pool. Everyone will be watching Phelps to see if he can restore himself to his former glory. He did fare well at the 2012 Olympics in London, so we’ll see what happens.

Phelps frequently overshadowed Lochte in his Olympic events, but let’s not count him out for any medals. Phelps barely edged out Lochte in London, and I think that Lochte will be even more determined to push Phelps out of the way and get his own regular place on top of the podium this year.

Missy Franklin Has Her Eye On More Records

Franklin, who is only 21 and on her second Olympic team, holds both world and American records for the 200m backstroke and a U.S. Open record in the same race, according to her USA Swimming bio. She won four gold medals in London, and she’s so young that you can expect many, many more medals to be added to her neck in Rio.

12-time Olympic medalist Natalie Coughlin shocked the swimming world when she failed to make the finals during the Olympic trials in the 100-meter freestyle and backstroke. Soon after, she dropped out of the 50-meter freestyle and announced she wouldn’t be going to Rio. She didn’t say she was retiring, but her spot leaves a big hole in the Olympic team — which female swimmer will emerge victorious? Coughlin’s absence opens the door to new swimming heroes.

More like this
What Is Jeanie Buss' Net Worth? The Lakers President Is Uber Rich
By Hugh McIntyre
A 'Bridgerton' Star Just Dropped A Major Hint About Joining The Live-Action Barbie Cast
By Bustle UK
The 10 Best Waterproof Watches For Swimming
By Lauren Moison
Jake Daniels Just Became The UK’s First Active Football Player To Come Out As Gay Since 1990
By Sam Ramsden
Get Even More From Bustle — Sign Up For The Newsletter