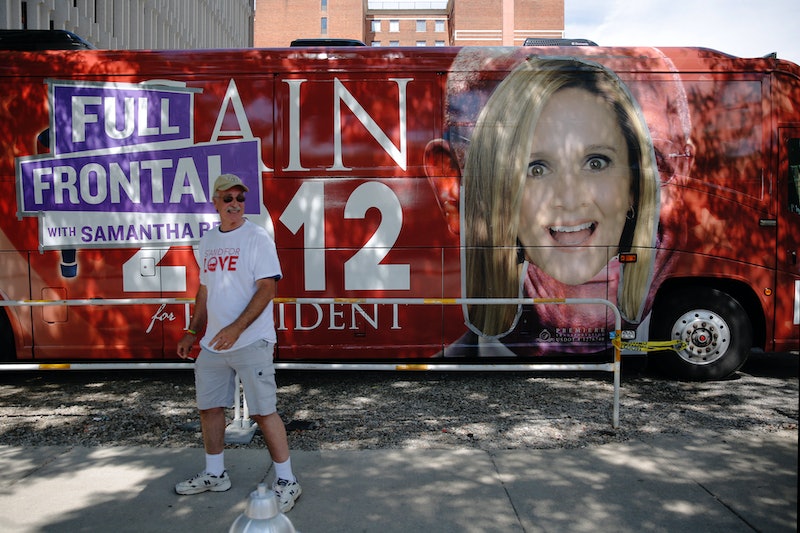 Some of us are old enough to remember the manna from heaven that was The Daily Show with Jon Stewart during the George W. Bush years. For those of us on the left, it was a time when the only person who was channeling our disbelief, stupefaction and outrage was a short, Jewish comedian on basic cable. And we loved him for it. Now, almost four election cycles later, Stewart is mostly off the air, and it’s his comedic progeny who are helping us make sense of this year’s “Clusterf*ck to the White House." But it’s Samantha Bee, in her TBS program Full Frontal, who is bringing us what is perhaps the freshest take on the conventions.

The Daily Show Alum — and to date, singular female late night host — traveled to Cleveland last week and to Philadelphia this week (in a re-claimed and quickly re-branded Herman Cain 2012 campaign bus) in order to get as real as possible about this unending hangover of an election.

Bee’s also been keeping others honest with her own brand of humor. On Tuesday, she posted “An Open Letter By A #NeverHillary Supporter Who Is Definitely Not Vladimir Putin,” and she also called out her own network for Clinton-bashing when they posted a video comparing the Democratic nominee’s laugh to a hyena’s, complete with the hashtag #ImWithHyena. Both the original Tweet and Bee’s reply have since been deleted, and TBS apologized.

Although the general slant of her politics tilts towards the Democrats and their nominee Hillary Clinton, she’s not unafraid to take either one to task, either:

However, this doesn’t come at the expense of balance or exploring nuance, even as she is really, really funny. “Tim Kaine has so much humanity it’s actually flowing into Hillary. He’s human enough for the both of them!”

Of course, some of her best work of the last couple of weeks was done at the Republican National Convention in Cleveland, where her team of correspondents interviewed convention attendees about political correctness and Black Lives Matter; it was on the latter subject that Bee made one of the most savvy observations I’ve heard yet of the entire 2016 race, describing people being interviewed by Full Frontal writer Ashley Black: “Most people we talked to [about Black Lives Matter] did want to understand, at least when faced with an actual black person forcing them to think critically about what they were about to say.”

It’s almost as stunning to think that it’s taken until 2016 to get a woman nominated to the Presidency as it is to think that we still only have one female voice in late night comedy; though the ratings haven’t been jaw-dropping, TBS has committed to keeping Bee on through 2016.

Thank God, because clearly we need her keeping an eye on things for us.