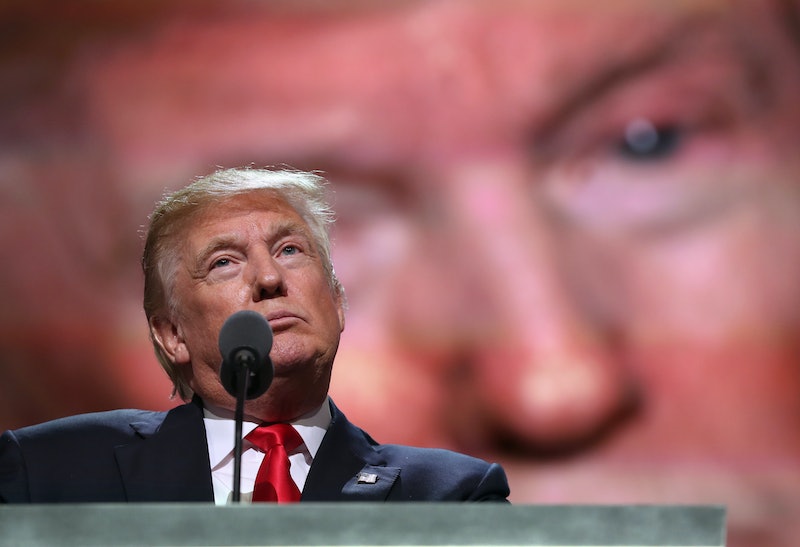 During a press conference on Wednesday, Republican presidential nominee Donald Trump told Katy Tur to "be quiet" while the NBC News reporter was questioning him about the potential Russian hack of the DNC. Trump also said "I know you want to save her," suggesting that Tur was engaged in an effort to shield Democratic nominee Hillary Clinton from criticism.

This is not the first condescending run-in Tur has had with Trump, throughout his primary and general election campaigns ― he also did a widely criticized interview with her last year, in which he hectored and mocked her for stumbling over her words during a question, saying "try getting it out," calling her "naive" for challenging his statistics on crime and immigration, and telling her "you don't even know what you're talking about." He's also publicly called her "little Katy, third-rate."

Basically, he has a pretty transparently, blindingly hostile relationship with her. And that's notable both for what it says about his attitude towards an inquisitive press, and his attitude towards women in the media ― his notoriously testy, sexist attitude towards Fox News host Megyn Kelly is probably the most glaring example, but it's by no means the only one.

That wasn't the only notable moment from Trump's presser, which was clearly held to try to shift some focus away from the Democratic National Convention and back onto himself ― as someone who evidently craves the spotlight and likes to suck up media cycles whenever he can, the fact that one headlining speaker after another has managed to witheringly attack him without even mentioning him by name may be an irritating factor.

He also insisted that Clinton's running mate, Virginia senator and former governor Tim Kaine, did "a terrible job" for the state of New Jersey. Which is true! Kaine has never done anything for the state of New Jersey, what with being from Virginia and all. Some have noted that Trump may have confused Kaine with former New Jersey governor Thomas Kean, but that would be quite the mistake, seeing as Kean is a Republican who last held elected office in 1990.

Of course, perhaps the most alarming part of Trump's presser was the point that drew out Tur's question in the first place ― his apparent invitation for the Russian government to continue hacking the United States, specifically to the detriment of Clinton and her campaign. After days of reports from U.S. intelligence officials suggesting that Russia may have been behind the recent DNC email leaks, this was glaring in the extreme.

I will tell you this: Russia, if you're listening, I hope you're able to find the 30,000 emails that are missing. I think you'll be mightily rewarded by our press.

Needless to say, potential American presidents generally don't invite foreign governments to hack their political rivals. It's trivially easy to imagine what the reaction would be if Clinton said such a thing ― it'd probably follow her around for the entirety of the campaign. But that's the thing about Trump's startling political ascent: every time he degrades what used to be a hard boundary of acceptable rhetoric or good taste, he makes it harder and harder for any individual transgression to stick.