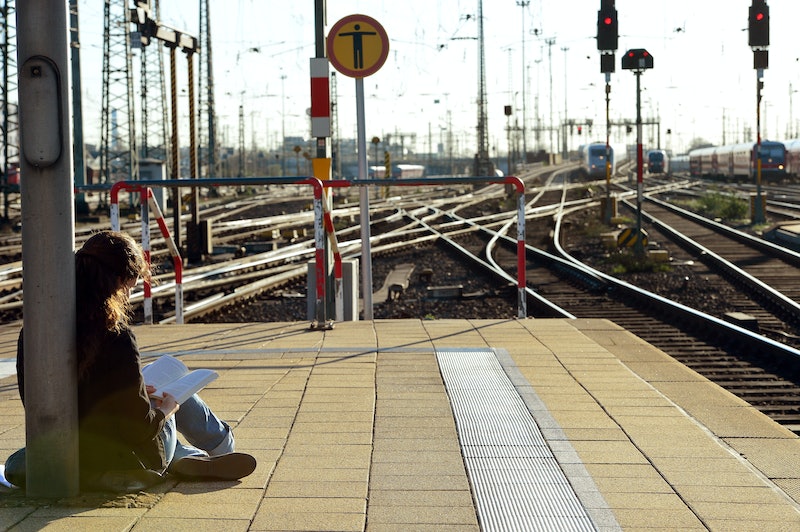 Living in the pages of Hannah Pittard's latest book, Listen to Me , is a couple, Mark and Maggie, whose marriage is at critical mass. Maggie, who was robbed at gunpoint months before, has become paranoid and emotionally distraught, and Mark questions how his wife has become so unlike the woman he married. When the story begins, the two are just setting off on a cross-country road trip. They don't expect they'll be forced to confront some of their biggest fears on the journey.

The trip Maggie and Mark embark upon has special meaning to author Hannah Pittard; she's takes the same drive every year. "Having written it, it's been a really interesting experience making the drive," Pittard tells Bustle. "I imagine Mark and Maggie. And it's funny, I'm imagining these people. But when I think of Mark and Maggie now, I don't think of them as belonging to me. I just think of them as this couple out there."

Mark and Maggie's anxieties heighten when they find themselves driving through dark mountains during a rainstorm. Since Pittard has embarked upon this same road trip many times, she says it was quite easy to conjure specific markers. "When you get into the West Virginia mountains, the trees are so thick that you don't see lights. The cities aren't huge, so it's not like seeing New York in the distance," Pittard says. "You feel like you're in the middle of nowhere, even though you're not."

Pittard uses the darkness of the mountains and sense of remote dislocation to create an atmosphere of fear. "Maggie thinks she's in the middle of nowhere, even though she knows it's not. It feels like the middle of nowhere. And it does. It does to her," Pittard says. "I've made the drive alone, and I've managed to work myself into my own little lather of fear."

As the characters navigate their way through their stormy marriage and the literal storm surrounding them, readers are presented with two dueling perspectives. "I think when I was writing Maggie, I was in love with Maggie. And when I was writing Mark, I was in love with Mark," Pittard says. "With every book I write, I really try to look up at the world and up at my characters and show their foibles, because we all have them. But I also want to show that there's something good in almost all of us. I feel like it's too easy to be cynical, and it's so easy to look at what's wrong with the world and what's ugly."

She says that real people are complicated and nuanced and varied, and that needs to be reflected in books — both because it's true, and because it's more satisfying as a writer and a reader.

"To a lot of readers, [complicated people] come across as petty people. That makes me sad," Pittard says. "I think they're complicated, real people. I think real people we all have foibles. But we all have some things that are good about us, too. Or at least, most of us."

A large part of what makes these characters come alive for the reader is their stark voices. Pittard says she has always had an obsession with the details of language. "I used to drive my mom crazy," Pittard says. She would sit in the backseat, listening to her walkman in one ear, and to her parents in the other, often asking her mother to repeat things. "I really wanted to hear the diction and the placement, and the specific expression. And instead of giving me that, they would almost always summarize... And so very early on, I had this sort of OCD with the placement of words, and the way people spoke, and whether they chose to split their infinitives, you know, accidentally or deliberately, and what it said about them. "

This attention to diction played a huge role in her writing of Listen to Me, particularly when she began to differentiate between Mark and Maggie. "I think this book more than any book, has provided me with this long format opportunity to play off these two people who on the one hand have a shared vocabulary because they've been together so long," says Pittard.

But on the other hand, she was also paying deft attention to the differences between the characters' speech. For instance, Mark refers to their murdered neighbor as "the college" girl" and Maggie refers to her as "the co-ed," a word that is much more antiquated. "Never once does he adopt her word for it or she adopt his word," Pittard says. "And, so, every sentence, every word in this book more than any other book is so deliberate and fraught over."

When these two starkly different characters finally arrive at their ending, Pittard says that the there are two frames of mind. "Half the people who read it finish it and they say, 'You gave me hope, thank you, you gave me hope.' and then half the people say, 'Wow, this is a bleak little number, these people are doomed.'" says Pittard. "And it's become, for me, almost a little bit of a litmus test... to gauge how [my friends are] doing in their life. And if they tell me it's a bleak ending, I'm like 'Aww, I need to buy you a beer.' And if they tell me it's a happy ending, I'm like, 'I always thought you and Sharon were happy. You are, aren't you? You totally are.'"

Pittard says that rather than having a concrete moral, she wanted to start a conversation, and inspire her readers to think harder about its themes. "This book is an ongoing conversation that I have with myself about technology, about marriage, about what it means to be a member of society, what it means to be scared...Are some fears good fears? Are there natural fears? Are there bad fears?"

This is Pittard's third novel, and she currently teaches English at the University of Kentucky. Her advice to emerging writers? To read, and read passionately. "In or out of a classroom, I can do a lot with someone who wants to learn how to write. But somebody who goes to pick up The Vintage Book of Contemporary American Short Stories edited by Tobias Wolfe, and reads it front to back, is going to have a crash course in creative writing. And I'm not talking skimming. I'm talking reading line by line... you will be a better writer. If you've never written a story, you can write a story after reading that collection."

More like this
The Enduring Appeal Of Escaping Our Own Brains
By Chaya Bhuvaneswar
9 Must-Read New Books Out This Week
By K.W. Colyard
Yomi Adegoke On The Offline Diaries & The Power Of Representation
By Jessica Morgan
The 43 Best Mystery Books To Read Now
By Morgan Leigh Davies
Get Even More From Bustle — Sign Up For The Newsletter